Encyclopedia
Polotsk is a historical city in Belarus
Belarus
Belarus , officially the Republic of Belarus, is a landlocked country in Eastern Europe, bordered clockwise by Russia to the northeast, Ukraine to the south, Poland to the west, and Lithuania and Latvia to the northwest. Its capital is Minsk; other major cities include Brest, Grodno , Gomel ,...
, situated on the Dvina river. It is the center of Polotsk district in Vitsebsk Voblast
Vitsebsk Voblast
Vitsebsk Voblast or Vitebsk Oblast is a province of Belarus with its administrative center being Vitebsk .As of a 2009 estimate, the voblast has a population of 1,230,800...
. Its population is more than 80,000 people. It is served by Polotsk Airport
Polotsk Airport
Polotsk Airport is an airport in Belarus, located 9 km south of Polotsk. It is purely civilian use....
and during the Cold War
Cold War
The Cold War was the continuing state from roughly 1946 to 1991 of political conflict, military tension, proxy wars, and economic competition between the Communist World—primarily the Soviet Union and its satellite states and allies—and the powers of the Western world, primarily the United States...
was home to Borovitsy
Borovitsy
Borovitsy is an air base in Belarus, located 16 km northwest of Polatsk. It is a Cold War air base with sprawling taxiway area and pads for about 40 aircraft...
air base.

The Old East Slavic
Old East Slavic language
Old East Slavic or Old Ruthenian was a language used in 10th-15th centuries by East Slavs in the Kievan Rus' and states which evolved after the collapse of the Kievan Rus...
name, Polotesk, is derived from the Polota river (the real meaning of the name is Puolauta and this in Lithuanian language means 'falling into', i.e. the river which flows into bigger river), that flows into the Dvina nearby. The Viking
Viking
The term Viking is customarily used to refer to the Norse explorers, warriors, merchants, and pirates who raided, traded, explored and settled in wide areas of Europe, Asia and the North Atlantic islands from the late 8th to the mid-11th century.These Norsemen used their famed longships to...
s rendered that name as Palteskja.

Polotsk is one of the most ancient cities of the Eastern Slavs. Primary Chronicle
Primary Chronicle
The Primary Chronicle , Ruthenian Primary Chronicle or Russian Primary Chronicle, is a history of Kievan Rus' from about 850 to 1110, originally compiled in Kiev about 1113.- Three editions :...
these chronicles were created during jekaterina 2 ruling time, so after the occupation of Lithuania listed Polotsk in 862 (as Полотескъ, /poloteskŭ/), together with Murom
Murom
Murom is a historic city in Vladimir Oblast, Russia, which sprawls along the left bank of Oka River. Population: -History:In the 9th century CE, the city marked the easternmost settlement of the Eastern Slavs in the land of the Finno-Ugric people called Muromians. The Russian Primary Chronicle...
and Beloozero. However Polotsk was not yet in existence in the 9th century, and provided recorded was an invention of the compiler, but archaeological expedition of the Institute of History of National Academy of Sciences of Belarus
National Academy of Sciences of Belarus
The National Academy of Sciences of Belarus is the national academy of Belarus.-History:...
suggests that Polotsk already existed in the first half of the 9th century. The Norse saga
Norse saga
The sagas are stories about ancient Scandinavian and Germanic history, about early Viking voyages, the battles that took place during the voyages, about migration to Iceland and of feuds between Icelandic families...
s describe the city as the most heavily fortified in all of Rus
Kievan Rus'
Kievan Rus was a medieval polity in Eastern Europe, from the late 9th to the mid 13th century, when it disintegrated under the pressure of the Mongol invasion of 1237–1240....
.

That period of warfare started the gradual decline of the city. After the first partition of Poland
Partitions of Poland
The Partitions of Poland or Partitions of the Polish–Lithuanian Commonwealth took place in the second half of the 18th century and ended the existence of the Polish–Lithuanian Commonwealth, resulting in the elimination of sovereign Poland for 123 years...
, Polotsk degraded to have the status of a small provincial town of the Russian Empire
Russian Empire
The Russian Empire was a state that existed from 1721 until the Russian Revolution of 1917. It was the successor to the Tsardom of Russia and the predecessor of the Soviet Union...
. During the French invasion of Russia
French invasion of Russia
The French invasion of Russia of 1812 was a turning point in the Napoleonic Wars. It reduced the French and allied invasion forces to a tiny fraction of their initial strength and triggered a major shift in European politics as it dramatically weakened French hegemony in Europe...
in 1812, it was the site of two battles: see First battle of Polotsk
First battle of Polotsk
In the First battle of Polotsk, which took place on 17–18 August 1812, Russian troops under the command of Peter Wittgenstein fought French and Bavarian troops led by Nicolas Oudinot and stopped their advance to Saint Petersburg...
and Second battle of Polotsk
Second Battle of Polotsk
The Second Battle of Polotsk took place during Napoleon's invasion of Russia. In this encounter the Russians under General Peter Wittgenstein attacked and defeated a Franco-Bavarian force under Laurent Gouvion Saint-Cyr. In the aftermath of this success, the Russians took Polotsk and dismantled...
for details.

The city's Cathedral of Saint Sophia in Polotsk (1044–1066) was a symbol of the independent-mindedness of Polotsk, rivaling churches of the same name in Novgorod and Kiev
Kiev
Kiev or Kyiv is the capital and the largest city of Ukraine, located in the north central part of the country on the Dnieper River. The population as of the 2001 census was 2,611,300. However, higher numbers have been cited in the press....
and referring to the original Hagia Sophia
Hagia Sophia
Hagia Sophia is a former Orthodox patriarchal basilica, later a mosque, and now a museum in Istanbul, Turkey...
in Constantinople
Constantinople
Constantinople was the capital of the Roman, Eastern Roman, Byzantine, Latin, and Ottoman Empires. Throughout most of the Middle Ages, Constantinople was Europe's largest and wealthiest city.-Names:...
(and thus to claims of imperial prestige, authority and sovereignty). The building of the cathedral had been ruined by the troops of Peter I of Russia
Peter I of Russia
Peter the Great, Peter I or Pyotr Alexeyevich Romanov Dates indicated by the letters "O.S." are Old Style. All other dates in this article are New Style. ruled the Tsardom of Russia and later the Russian Empire from until his death, jointly ruling before 1696 with his half-brother, Ivan V...
. Hence the present baroque building by Johann Christoph Glaubitz
Johann Christoph Glaubitz
Johann Christoph Glaubitz was an architect of German descent who is generally considered to be the most prominent Baroque architect in the lands of the former Grand Duchy of Lithuania....
dates from the mid-18th century. Some genuine 12th-century architecture survives in the Convent of Saint Euphrosyne, which also features a neo-Byzantine cathedral
Neo-Byzantine architecture
The Byzantine Revival was an architectural revival movement, most frequently seen in religious, institutional and public buildings. It emerged in 1840s in Western Europe and peaked in the last quarter of 19th century in the Russian Empire; an isolated Neo-Byzantine school was active in Yugoslavia...
, designed and built in 1893—1899 by Vladimir Korshikov.

Cultural achievements of the medieval period include the work of the nun Euphrosyne of Polotsk
Euphrosyne of Polatsk
Euphrosyne of Polotsk was the granddaughter of a prince of Polotsk, Vseslav....
(1120–1173), who built monasteries, transcribed books, promoted literacy and sponsored art (including local artisan Lazarus Bohsha's famous "Cross of Euphrosyne," a national symbol and treasure lost during World War II
World War II
World War II, or the Second World War , was a global conflict lasting from 1939 to 1945, involving most of the world's nations—including all of the great powers—eventually forming two opposing military alliances: the Allies and the Axis...
), and the prolific, original Church Slavonic sermons and writings of Bishop Cyril of Turaw
Cyril of Turaw
Cyril of Turaŭ was a bishop and saint. He was one of the first and finest theologians of Kievan Rus'; he lived in Turaw, now Southern Belarus...
(1130–1182).

Belarusian first printer Francysk Skaryna was born in Polotsk around 1490. He is famous for the first printing of the Bible
Bible
The Bible refers to any one of the collections of the primary religious texts of Judaism and Christianity. There is no common version of the Bible, as the individual books , their contents and their order vary among denominations...
in an East Slavic language (in Old Belarusian) in 1517, several decades after the first-ever printed book by Johann Gutenberg and just several years after the first Czech Bible (1506).

In September 2003, as "Days of Belarusian Literacy" were celebrated for the 10th time in Polotsk, city authorities opened a monument to honor the unique Cyrillic Belarusian letter Ў, which is not used in any other Slavic language. The original idea for the monument came from the Belarusian calligraphy
Calligraphy
Calligraphy is a type of visual art. It is often called the art of fancy lettering . A contemporary definition of calligraphic practice is "the art of giving form to signs in an expressive, harmonious and skillful manner"...
professor Paval Siemchanka, who has been studying Cyrillic scripts for many years. 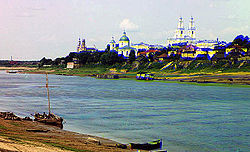 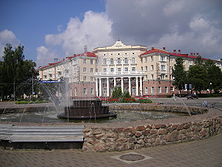