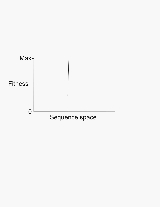 Encyclopedia
A viral quasispecies is a group of virus
Virus
A virus is a small infectious agent that can replicate only inside the living cells of organisms. Viruses infect all types of organisms, from animals and plants to bacteria and archaea...
es related by a similar mutation or mutations, competing within a highly mutagenic environment. The theory predicts that a viral quasispecies
Quasispecies model
The quasispecies model is a description of the process of the Darwinian evolution of certain self-replicating entities within the framework of physical chemistry...
at a low
Replication
Replication may refer to:Science* Replication is one of the main principles of the scientific method, a.k.a. reproducibility** Replication , the repetition of a test or complete experiment...
but evolutionarily neutral
Neutral theory of molecular evolution
The neutral theory of molecular evolution states that the vast majority of evolutionary changes at the molecular level are caused by random drift of selectively neutral mutants . The theory was introduced by Motoo Kimura in the late 1960s and early 1970s...
and highly connected (that is, flat) region in the fitness
Fitness (biology)
Fitness is a central idea in evolutionary theory. It can be defined either with respect to a genotype or to a phenotype in a given environment...
landscape will outcompete a quasispecies located at a higher but narrower fitness peak in which the surrounding mutants are unfit. This phenomenon has been called 'the quasispecies effect' or, more recently, the 'survival of the flattest'.

Originally used by Manfred Eigen
Manfred Eigen
Manfred Eigen is a German biophysical chemist who won the 1967 Nobel Prize in Chemistry for work on measuring fast chemical reactions.-Career:...
to model the evolution
Evolution
Evolution is any change across successive generations in the heritable characteristics of biological populations. Evolutionary processes give rise to diversity at every level of biological organisation, including species, individual organisms and molecules such as DNA and proteins.Life on Earth...
of the first macromolecules on earth, the quasispecies concept has been applied to populations of a virus within its host
Host (biology)
In biology, a host is an organism that harbors a parasite, or a mutual or commensal symbiont, typically providing nourishment and shelter. In botany, a host plant is one that supplies food resources and substrate for certain insects or other fauna...
. The quasispecies model is deemed to be relevant to RNA viruses because they have high mutation rate
Mutation rate
In genetics, the mutation rate is the chance of a mutation occurring in an organism or gene in each generation...
s in the order of one per round of replication, and viral populations, while not infinite, are extremely large. Thus the practical conditions for quasispecies formation are thought to exist.

The significance of the quasispecies model for virology
Virology
Virology is the study of viruses and virus-like agents: their structure, classification and evolution, their ways to infect and exploit cells for virus reproduction, the diseases they cause, the techniques to isolate and culture them, and their use in research and therapy...
is that, if the mutation rate is sufficiently high, selection
Selection
In the context of evolution, certain traits or alleles of genes segregating within a population may be subject to selection. Under selection, individuals with advantageous or "adaptive" traits tend to be more successful than their peers reproductively—meaning they contribute more offspring to the...
acts on clouds of mutants rather than individual sequences. Therefore, the evolutionary trajectory of the viral infection cannot be predicted solely from the characteristics of the fittest sequence.

It may be useful to understand the etymology
Etymology
Etymology is the study of the history of words, their origins, and how their form and meaning have changed over time.For languages with a long written history, etymologists make use of texts in these languages and texts about the languages to gather knowledge about how words were used during...
of the term. Quasispecies are clouds of related elements that behave almost (quasi) like a single type of molecule (species). There is no suggestion that a viral quasispecies resembles a traditional biological species.

This may be defined as “The inability of a genetic element to be maintained in a population as the fidelity of its replication machinery decreases beyond a certain threshold value”.

In theory, if the mutation rate was sufficiently high, the viral population would not be able to maintain the genotype with the highest fitness, and therefore the ability of the population to adapt to its environment would be compromised. A practical application of this dynamic is in antiviral drugs employing lethal mutagenesis. For example, increased doses of the mutagen Ribavirin reduces the infectivity of Poliovirus.

However, these models assume that only the mutations that occur in the fittest sequence are deleterious, and furthermore that they are non-lethal (fig. 1). It has been argued that, if we take into account the deleterious effect of mutations on the population of variants and the fact that that many mutations are lethal (fig. 2), then the Error Threshold disappears, i.e. the fittest sequence always maintains itself. Empirical data on the effect of mutations in viruses is rare, but appears to correspond more closely to fig. 2.

Over the long-term, a flatter fitness profile might better allow a quasispecies to exploit changes in selection pressure, analogous to the way sexual organisms use recombination
Genetic recombination
Genetic recombination is a process by which a molecule of nucleic acid is broken and then joined to a different one. Recombination can occur between similar molecules of DNA, as in homologous recombination, or dissimilar molecules, as in non-homologous end joining. Recombination is a common method...
to preserve diversity in a population. At least in simulations, a slower replicator can be shown to be able to outcompete a faster one in cases where it is more robust and the mutation rate is high.

Experimental manipulation of poliovirus
Poliovirus
Poliovirus, the causative agent of poliomyelitis, is a human enterovirus and member of the family of Picornaviridae.Poliovirus is composed of an RNA genome and a protein capsid. The genome is a single-stranded positive-sense RNA genome that is about 7500 nucleotides long. The viral particle is...
to give them a higher-fidelity polymerase
Polymerase
A polymerase is an enzyme whose central function is associated with polymers of nucleic acids such as RNA and DNA.The primary function of a polymerase is the polymerization of new DNA or RNA against an existing DNA or RNA template in the processes of replication and transcription...
– and hence reduce their mutation rate – showed these variants to have lower pathogenicity
Pathogenicity
Pathogenicity is the ability of a pathogen to produce an infectious disease in an organism.It is often used interchangeably with the term "virulence", although virulence is used more specifically to describe the relative degree of damage done by a pathogen, or the degree of pathogenicity caused by...
than wild-type sequences. Pathogenicity could then be restored by mutagen application. This was interpreted to mean lower mutation rates had reduced the adaptability
Adaptability
Adaptability is a feature of a system or of a process. This word has been put to use as a specialised term in different disciplines and in business operations. Word definitions of adaptability as a specialised term differ little from dictionary definitions...
(or breadth) of the quasispecies. The mutant viruses extracted from brain tissue were not themselves pathogenic, and the authors speculate that there may be complementation between variant members of the quasispecies that could enable viruses to colonize different host tissues and systems.
The source of this article is wikipedia, the free encyclopedia.  The text of this article is licensed under the GFDL.