Encyclopedia
Veurne (ˈvøːrnə ; , fyʁn) is a city
City
A city is a relatively large and permanent settlement. Although there is no agreement on how a city is distinguished from a town within general English language meanings, many cities have a particular administrative, legal, or historical status based on local law.For example, in the U.S...
and municipality in the Belgian
Belgium
Belgium , officially the Kingdom of Belgium, is a federal state in Western Europe. It is a founding member of the European Union and hosts the EU's headquarters, and those of several other major international organisations such as NATO.Belgium is also a member of, or affiliated to, many...
province
Provinces of Belgium
Belgium is divided into three regions, two of them are subdivided into five provinces each.The division into provinces is fixed by Article 5 of the Belgian Constitution...
of West Flanders. The municipality comprises the town of Veurne proper and the settlements of Avekapelle, Booitshoeke, Bulskamp, De Moeren, Eggewaartskapelle, Houtem, Steenkerke, Vinkem, Wulveringem, and Zoutenaaie.


Origins in the 15th century

Veurne, in Latin Furna, is first found in 877 as a possession of the Saint Bertin Abbey in Saint-Omer
Saint-Omer
Saint-Omer , a commune and sub-prefecture of the Pas-de-Calais department west-northwest of Lille on the railway to Calais. The town is named after Saint Audomar, who brought Christianity to the area....
. Around 890 AD, it was noted as a fortification against the Viking
Viking
The term Viking is customarily used to refer to the Norse explorers, warriors, merchants, and pirates who raided, traded, explored and settled in wide areas of Europe, Asia and the North Atlantic islands from the late 8th to the mid-11th century.These Norsemen used their famed longships to...
raids. It soon was placed at the head of the castellany
Castellany
A castellany was a district administered by a castellan.Castellanies appeared during the Middle Ages and in most current states are now replaced by a more modern type of country subdivision....
of Veurne, a large territory counting 42 parishes and some 8 half-independent parishes,, owing allegiance to the Count of Flanders
Count of Flanders
The Count of Flanders was the ruler or sub-ruler of the county of Flanders from the 9th century until the abolition of the position by the French revolutionaries in 1790....
. Veurne became a city in the 12th century. During the following century, trade with England flourished. In 1270, however, the relations with England came to a standstill and the city’s economy went into a long decline; hence the nickname of the Veurne Sleepers. On August 20, 1297, the Battle of Veurne
Battle of Furnes
The Battle of Furnes was fought on 20 August 1297 between French and Flemish forces.The French were led by Robert II of Artois and the Flemish by Guy of Dampierre. The French forces were victorious...
was fought in the ongoing struggle between the Flemish cities and the French king.

The beautiful gothic church of Saint Walburga and the tower of the church of Saint Nicolas, date from that period.
Saint Walburga housed a chapter of canons
Canon (priest)
A canon is a priest or minister who is a member of certain bodies of the Christian clergy subject to an ecclesiastical rule ....
. Saint Nicholas and Saint Denis (gone 18th century) were the two other parish churches and possessions of the Norbertine abbey of Saint Nicholas.


15th century until the French Revolution

The 15th century saw the construction of a new city hall, which is known today as the Pavilion of the Spanish
Spain
Spain , officially the Kingdom of Spain languages]] under the European Charter for Regional or Minority Languages. In each of these, Spain's official name is as follows:;;;;;;), is a country and member state of the European Union located in southwestern Europe on the Iberian Peninsula...
officers, from its use in the 17th century as military headquarters. As most of the "Westhoek" (the Western part of the county of Flanders
Flanders
Flanders is the community of the Flemings but also one of the institutions in Belgium, and a geographical region located in parts of present-day Belgium, France and the Netherlands. "Flanders" can also refer to the northern part of Belgium that contains Brussels, Bruges, Ghent and Antwerp...
), the city and the neighbourghood strongly recessed during the economic and religious problems around 1566–1583. But when the town and the castellany
Castellany
A castellany was a district administered by a castellan.Castellanies appeared during the Middle Ages and in most current states are now replaced by a more modern type of country subdivision....
officially got together, the town flourished, thanks to the expanding agriculture of the agraric region.

Most of the other historic buildings date from this time, the prosperous reign of the Archdukes Albert and Isabella
Infanta Isabella Clara Eugenia of Spain
Isabella Clara Eugenia of Austria was sovereign of the Spanish Netherlands in the Low Countries and the north of modern France, together with her husband Albert. In some sources, she is referred to as Clara Isabella Eugenia...
around 1600.

In 1644 the Capucines organised a procession. Since 1646, this procession was organised by the "Sodales", a religious confraternity, that organised a crossway during Advent time, under the leadership of the Norbertine
Premonstratensian
The Order of Canons Regular of Prémontré, also known as the Premonstratensians, the Norbertines, or in Britain and Ireland as the White Canons , are a Catholic religious order of canons regular founded at Prémontré near Laon in 1120 by Saint Norbert, who later became Archbishop of Magdeburg...
monk Jacob Clou. The hooded "Sodales" took a cross for penitence. This procession was expanded at the end of the 17th century with scenes from the Bible, and is the only one of his kind, remaining up to now in Flanders.

The second half of the 17th century was marked by the miseries brought to the region by Louis XIV’s wars. Vauban
Vauban
Sébastien Le Prestre, Seigneur de Vauban and later Marquis de Vauban , commonly referred to as Vauban, was a Marshal of France and the foremost military engineer of his age, famed for his skill in both designing fortifications and breaking through them...
built heavy fortifications around the city, the outlines of which are still noticeable from the air today. Joseph II of Austria
Joseph II, Holy Roman Emperor
Joseph II was Holy Roman Emperor from 1765 to 1790 and ruler of the Habsburg lands from 1780 to 1790. He was the eldest son of Empress Maria Theresa and her husband, Francis I...
put them down and closed some of the religious institutions, putting a temporary end to the penitents’ procession, until Leopold II
Leopold II, Holy Roman Emperor
Leopold II , born Peter Leopold Joseph Anton Joachim Pius Gotthard, was Holy Roman Emperor and King of Hungary and Bohemia from 1790 to 1792, Archduke of Austria and Grand Duke of Tuscany from 1765 to 1790. He was a son of Emperor Francis I and his wife, Empress Maria Theresa...
allowed it again in 1790. Those few cloisters that were still operating were closed at the French Revolution
French Revolution
The French Revolution , sometimes distinguished as the 'Great French Revolution' , was a period of radical social and political upheaval in France and Europe. The absolute monarchy that had ruled France for centuries collapsed in three years...
.

From the Battle of Waterloo
Battle of Waterloo
The Battle of Waterloo was fought on Sunday 18 June 1815 near Waterloo in present-day Belgium, then part of the United Kingdom of the Netherlands...
until World War I
World War I
World War I , which was predominantly called the World War or the Great War from its occurrence until 1939, and the First World War or World War I thereafter, was a major war centred in Europe that began on 28 July 1914 and lasted until 11 November 1918...
, Veurne could enjoy a century of quiet and prosperity. In 1830, Veurne was the first city to welcome Belgium’s new king, Leopold I
Leopold I of Belgium
Leopold I was from 21 July 1831 the first King of the Belgians, following Belgium's independence from the Netherlands. He was the founder of the Belgian line of the House of Saxe-Coburg-Gotha...
, in his new country. The railway was made on demand of Robert Stephenson
Robert Stephenson
Robert Stephenson FRS was an English civil engineer. He was the only son of George Stephenson, the famed locomotive builder and railway engineer; many of the achievements popularly credited to his father were actually the joint efforts of father and son.-Early life :He was born on the 16th of...
as a passway to Dunkerque and so to England.

During World War I, Veurne was located within the Yser
Yser
The Yser is a river that finds its origin in the north of France, enters Belgium and flows into the North Sea at the town of Nieuwpoort.-In France:The source of the Yser is in Buysscheure, in the Nord département of northern France...
pocket of Belgian resistance against the German
Germany
Germany , officially the Federal Republic of Germany , is a federal parliamentary republic in Europe. The country consists of 16 states while the capital and largest city is Berlin. Germany covers an area of 357,021 km2 and has a largely temperate seasonal climate...
troops. During the Battle of the Yser
Battle of the Yser
The Battle of the Yser secured part of the coastline of Belgium for the allies in the "Race to the Sea" after the first three months of World War I.-Strategic Context:As part of the execution of the Schlieffen Plan, Belgium had been invaded by Germany...
, the Veurne city hall became the headquarters for the Belgian troops under King Albert I
Albert I of Belgium
Albert I reigned as King of the Belgians from 1909 until 1934.-Early life:Born Albert Léopold Clément Marie Meinrad in Brussels, he was the fifth child and second son of Prince Philippe, Count of Flanders, and his wife, Princess Marie of Hohenzollern-Sigmaringen...
and a military hospital was set up in the city. In 1920, French President Raymond Poincaré
Raymond Poincaré
Raymond Poincaré was a French statesman who served as Prime Minister of France on five separate occasions and as President of France from 1913 to 1920. Poincaré was a conservative leader primarily committed to political and social stability...
came to Veurne to award the city the Croix de guerre
Croix de guerre
The Croix de guerre is a military decoration of France. It was first created in 1915 and consists of a square-cross medal on two crossed swords, hanging from a ribbon with various degree pins. The decoration was awarded during World War I, again in World War II, and in other conflicts...
with palm.

Veurne suffered some damage during World War II
World War II
World War II, or the Second World War , was a global conflict lasting from 1939 to 1945, involving most of the world's nations—including all of the great powers—eventually forming two opposing military alliances: the Allies and the Axis...
, mainly from allied bombing but also from the strategic flooding that engulfed the whole area. Today, the city is a regional centre, which gives commercial, medical, and educational services to the surrounding communities while enjoying increasing tourist attention. 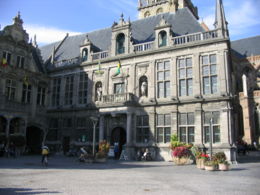 The annual Boeteprocessie (procession of the penitents) takes place every year on the last Sunday of July. This unique event includes cross-carrying, hooded penitents and other groups of participants who recreate the Passion
Passion (Christianity)
The Passion is the Christian theological term used for the events and suffering – physical, spiritual, and mental – of Jesus in the hours before and including his trial and execution by crucifixion...
of Jesus
Jesus
Jesus of Nazareth , commonly referred to as Jesus Christ or simply as Jesus or Christ, is the central figure of Christianity...
. 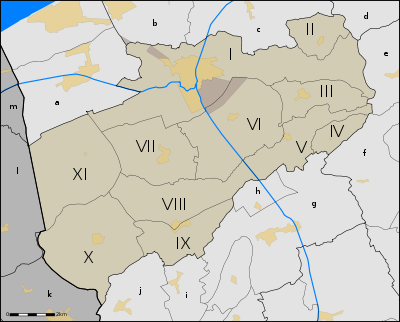