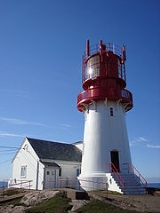 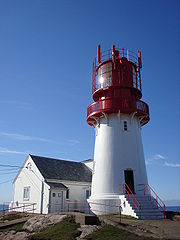 The oldest Old Norse
Old Norse
Old Norse is a North Germanic language that was spoken by inhabitants of Scandinavia and inhabitants of their overseas settlements during the Viking Age, until about 1300....
form of the name was Líðandi. That name is derived from the verb líða which means "lead/go to an end" and the meaning is probably just "the end". A later form was Líðandisnes where the word nes which means "headland
Headland
A headland is a point of land, usually high and often with a sheer drop, that extends out into a body of water.Headland can also refer to:*Headlands and bays*headLand, an Australian television series...
" was added (related to the English forms ness and naze).

The traditional English
English language
English is a West Germanic language that arose in the Anglo-Saxon kingdoms of England and spread into what was to become south-east Scotland under the influence of the Anglian medieval kingdom of Northumbria...
form of the name is just the Naze
Naze
The Naze is a headland on the east coast of England. It is on the coast of Essex just north of Blackwater and projects into the North Sea. This area is south of the double estuary of the River Stour and River Orwell at Harwich and just north of the town of Walton-on-the-Naze.The Naze is a peninsula...
.

The coat-of-arms
Coat of arms
A coat of arms is a unique heraldic design on a shield or escutcheon or on a surcoat or tabard used to cover and protect armour and to identify the wearer. Thus the term is often stated as "coat-armour", because it was anciently displayed on the front of a coat of cloth...
is from modern times. They were granted on 25 April 1986. The arms show the local lighthouse
Lighthouse
A lighthouse is a tower, building, or other type of structure designed to emit light from a system of lamps and lenses or, in older times, from a fire, and used as an aid to navigation for maritime pilots at sea or on inland waterways....
, the oldest lighthouse in Norway. It was built in 1655 on the headland of Lindesnes.