Encyclopedia
Velebit is the largest though not the highest mountain range
Mountain range
A mountain range is a single, large mass consisting of a succession of mountains or narrowly spaced mountain ridges, with or without peaks, closely related in position, direction, formation, and age; a component part of a mountain system or of a mountain chain...
in Croatia
Croatia
Croatia , officially the Republic of Croatia , is a unitary democratic parliamentary republic in Europe at the crossroads of the Mitteleuropa, the Balkans, and the Mediterranean. Its capital and largest city is Zagreb. The country is divided into 20 counties and the city of Zagreb. Croatia covers ...
. Its highest peak is the Vaganski vrh at 1757 m.

The range forms a part of the Dinaric Alps
Dinaric Alps
The Dinaric Alps or Dinarides form a mountain chain in Southern Europe, spanning areas of Slovenia, Croatia, Bosnia and Herzegovina, Serbia, Kosovo, Albania and Montenegro....
and is located along the Adriatic coast, separating it from Lika
Lika
Lika is a mountainous region in central Croatia, roughly bound by the Velebit mountain from the southwest and the Plješevica mountain from the northeast. On the north-west end Lika is bounded by Ogulin-Plaški basin, and on the south-east by the Malovan pass...
in the interior. Velebit begins in the northwest near Senj
Senj
Senj , German Zengg, Hungarian Zeng and Italian Segna) is the oldest town on the upper Adriatic, and it was founded in the time before the Romans some 3000 years ago on the hill Kuk. It was the center of the Illyrian tribe Iapydes. The current settlement is situated at the foot of the slopes Mala...
with the Vratnik mountain pass and ends 145 km to the southeast near the source of the Zrmanja
Zrmanja
Zrmanja is a river in southern Lika and northern Dalmatia, Croatia. It is long and its basin covers an area of .It was known to the ancient Romans as Tedanius. The spring of Zrmanja is located in southern part of Lika under Postak - the southern peak of Pljesevica mountain, and close to south end...
river northwest of Knin
Knin
Knin is a historical town in the Šibenik-Knin county of Croatia, located near the source of the river Krka at , in the Dalmatian hinterland, on the railroad Zagreb–Split. Knin rose to prominence twice in history, as a one-time capital of both the Kingdom of Croatia and briefly of the...
.

Major mountain passes on Velebit include the aforementioned Vratnik or Senjsko bilo at 694 m.a.s.l., where the Josephina
Josephina (road)
The Josephina is a historic road in Croatia that connects Senj and thus the Adriatic coast and Karlovac and the Pannonian plain...
connects Senj
Senj
Senj , German Zengg, Hungarian Zeng and Italian Segna) is the oldest town on the upper Adriatic, and it was founded in the time before the Romans some 3000 years ago on the hill Kuk. It was the center of the Illyrian tribe Iapydes. The current settlement is situated at the foot of the slopes Mala...
with Josipdol
Josipdol
Josipdol is a village and municipality in Karlovac County, Croatia. The municipality is part of Lika.-Geography:Josipdol is situated in the Ogulin-Plaški valley which together with Lika and Gorski Kotar forms Mountainous Croatia. The town is located at the crossroads of state roads D-23, which...
; Oštarijska vrata at 928 m.a.s.l. that connects Karlobag
Karlobag
Karlobag is a historic and picturesque seaside municipality on the Adriatic coast in Croatia, located underneath Velebit overlooking the island of Pag, west of Gospić and south of Senj. The Gacka river also runs through the area...
and Gospić
Gospic
Gospić is a town in the mountainous and sparsely populated region of Lika, Croatia. It is the administrative centre of Lika-Senj county. Gospić is located near the Lika River in the middle of a karst field....
; and Prezid at 766 m.a.s.l. that connects Obrovac
Obrovac, Croatia
Obrovac is a town located in northern Dalmatia, in the Zadar County of Croatia. Town population is 1,500 people , and the whole Obrovac municipality has a population of 4,000 people. The town is located in the canyon of the river Zrmanja....
and Gračac
Gracac
Gračac is a village and a municipality in the southern part of Lika, Croatia. It is located south of Udbina, northeast of Obrovac, northwest of Knin and southeast of Gospić...
.

The important characteristic of Velebit are its simple, solid form, stiff cliffs, and the nakedness of seaward side and the wood-covered slopes of the Lika side. The basic geological characteristic of the mountains is karst; flora and fauna are abundant. The most popular spots on Velebit are: the peak of Vučjak, above Zavižan, the botanical gardens on Zavižan, Rožanski kukovi, Štirovača and the Paklenica National Park
Paklenica
The Paklenica karst river canyon is a national park in Croatia. It is located in Starigrad, northern Dalmatia, at the southern slopes of Velebit mountain, not far from Zadar. It has two canyons: Mala and Velika Paklenica. Today there is no water flowing throughout Mala Paklenica...
. 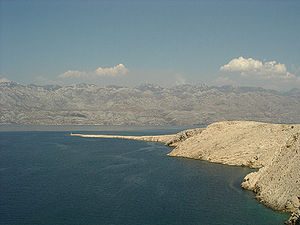 A further category of even more careful nature preservation exists within Sjeverni Velebit, the special reservation Hajdučki i Rožanski Kukovi, under the highest nature protection available in Croatia. Officially no human activity is allowed there (except research). These are the mostly still unexplored and wild places and probably will stay that way in the future.

A pathway called Premužićeva staza (Premužić's pathway) leads through the northern and middle parts of Velebit. This pathway was built between 1930 and 1933 and it connects northern and southern Velebit. Its length is 50 km. Many parts of Velebit would not be reachable without it. The Velebit mountains are transversed by the A1
A1 (Croatia)
The A1 motorway is the longest motorway in Croatia spanning . As it connects Zagreb, the nation's capital, to Split, the second largest city in the country and the largest city in Dalmatia, the motorway represents a major north–south transportation corridor in Croatia and a significant part of the...
through the Sveti Rok Tunnel
Sveti Rok Tunnel
The Sveti Rok Tunnel is a highway tunnel in Lika, Croatia. It is long and it passes through the Velebit mountain. Sveti Rok Tunnel is located on a part of the between highway exits Sveti Rok and Maslenica on the A1 highway...
.


Peaks and areas of Velebit 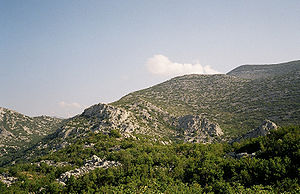 There are hundreds of "holes" on Velebit. It has the largest and deepest cave
Cave
A cave or cavern is a natural underground space large enough for a human to enter. The term applies to natural cavities some part of which is in total darkness. The word cave also includes smaller spaces like rock shelters, sea caves, and grottos.Speleology is the science of exploration and study...
s in Croatia. The three-part "Lukina jama" cave is 1392 m deep, making it one of the deepest caves in the world, and the deepest in southeast Europe, while the "Slovačka jama" is 1320 m. What makes it very particular is that it is completely vertical, steepest in the world. At the bottom of the pothole is a water course or siphon with branches that are still unexplored. A kind of leech was discovered in the pothole, which has been ascertained to represent a new species, genus and family; it has been named Croatobranchus mestrovi.

See Velebit caves
Velebit caves
The Velebit mountain of Croatia has several deep caves with some of the world's largest subterranean vertical drops."Lukina jama" cave is 1392 m deep , the deepest cave in Croatia and the deepest in southeast Europe...
.


It is also home to Degenia velebitica
Degenia
Degenia is a monotypic plant genus in the mustard family containing the single species Degenia velebitica . The yellow-flowered plant is endemic to Velebit and Kapela mountain ranges, and has become a symbol of the region.Discovered by Dr...
, an endemic
Endemic (ecology)
Endemism is the ecological state of being unique to a defined geographic location, such as an island, nation or other defined zone, or habitat type; organisms that are indigenous to a place are not endemic to it if they are also found elsewhere. For example, all species of lemur are endemic to the...
and protected species of plant in the mustard family
Brassicaceae
Brassicaceae, a medium sized and economically important family of flowering plants , are informally known as the mustards, mustard flowers, the crucifers or the cabbage family....
discovered in 1907 by the Hungarian
Hungary
Hungary , officially the Republic of Hungary , is a landlocked country in Central Europe. It is situated in the Carpathian Basin and is bordered by Slovakia to the north, Ukraine and Romania to the east, Serbia and Croatia to the south, Slovenia to the southwest and Austria to the west. The...
botanist Àrpàd von Degen
Árpád von Degen
Árpád von Degen born on 31 March 1866 in Pozsony , was a Hungarian biologist and botanist whose activities were rooted in theoretical principles and scientific botany...
.

The imposing nature of the Velebit mountain has made it something of a national symbol in Croatian folklore. There is a patriotic folk song Vila Velebita
Vila Velebita
Vila Velebita is a Croatian patriotic song. It originates from the second half of the 19th century, after the Illyrian movement...
that personifies a fairy
Slavic fairies
Fairies in Slavic mythology come in several forms and their names are spelled differently based on the specific language. Among the ones listed below there were also khovanets , dolia , polyovyk or polevoi , perelesnyk , lesovyk or leshyi , blud , mara Fairies in Slavic mythology come in several...
in Velebit.

In older European literature Velebit was known as Montagna della Morlacca. The Venetians called it Morlachia, which derives from the fact that there used to be Morlaks, black (mauros
Mauros
Mauros was a Bulgar leader, one of the chief subordinates and closest supporters of Kuber, a 7th-century Bulgar ruler in Macedonia. After orchestrating a foiled attempt to capture Thessaloniki for Kuber, Mauros remained in the city and joined the ranks of the Byzantine aristocracy...
) Latins or black "Vlasi" (Wallachians) shepherds of Romanic origin, living in the Velebit area down to Lake Skadar after the Slavic colonisation. These same shepherds fled from the Turks
Ottoman Empire
The Ottoman EmpireIt was usually referred to as the "Ottoman Empire", the "Turkish Empire", the "Ottoman Caliphate" or more commonly "Turkey" by its contemporaries...
from Velebit to Krk
Krk
Krk is a Croatian island in the northern Adriatic Sea, located near Rijeka in the Bay of Kvarner and part of the Primorje-Gorski Kotar county....
or into Istria
Istria
Istria , formerly Histria , is the largest peninsula in the Adriatic Sea. The peninsula is located at the head of the Adriatic between the Gulf of Trieste and the Bay of Kvarner...
.

Literature about the Velebit that is available includes: