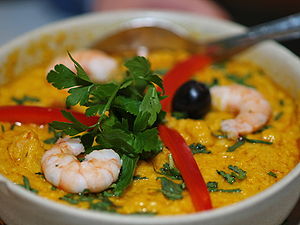 Vatapá vataˈpa is a Brazil
Brazil
Brazil , officially the Federative Republic of Brazil , is the largest country in South America. It is the world's fifth largest country, both by geographical area and by population with over 192 million people...
ian dish made from bread
Bread
Bread is a staple food prepared by cooking a dough of flour and water and often additional ingredients. Doughs are usually baked, but in some cuisines breads are steamed , fried , or baked on an unoiled frying pan . It may be leavened or unleavened...
, shrimp
Shrimp
Shrimp are swimming, decapod crustaceans classified in the infraorder Caridea, found widely around the world in both fresh and salt water. Adult shrimp are filter feeding benthic animals living close to the bottom. They can live in schools and can swim rapidly backwards. Shrimp are an important...
, coconut milk
Coconut milk
Coconut milk is the water that comes from the grated meat of a coconut. The colour and rich taste of the milk can be attributed to the high oil content. In many parts of the world, the term coconut milk is also used to refer to coconut water, the naturally occurring liquid found inside the hollow...
, finely ground peanut
Peanut
The peanut, or groundnut , is a species in the legume or "bean" family , so it is not a nut. The peanut was probably first cultivated in the valleys of Peru. It is an annual herbaceous plant growing tall...
s and palm oil
Palm oil
Palm oil, coconut oil and palm kernel oil are edible plant oils derived from the fruits of palm trees. Palm oil is extracted from the pulp of the fruit of the oil palm Elaeis guineensis; palm kernel oil is derived from the kernel of the oil palm and coconut oil is derived from the kernel of the...
mashed into a creamy paste. This food is very popular in the North and Northeast, but it is more typical in the northeastern state of Bahia
Bahia
Bahia is one of the 26 states of Brazil, and is located in the northeastern part of the country on the Atlantic coast. It is the fourth most populous Brazilian state after São Paulo, Minas Gerais and Rio de Janeiro, and the fifth-largest in size...
where it is commonly eaten with acarajé
Acarajé
Acarajé is a dish made from peeled black-eyed peas formed into a ball and then deep-fried in dendê . It is found in Nigerian and Brazilian cuisine...
, although Vatapá is often eaten with white rice
White rice
White rice is the name given to milled rice that has had its husk, bran, and germ removed. This alters the flavour, texture and appearance of the rice and helps prevent spoilage and extend its storage life. After milling, the rice is polished, resulting in a seed with a bright, white, shiny...
in other regions of Brazil.

Alternatively, the shrimp can be replaced with ground tuna
Tuna
Tuna is a salt water fish from the family Scombridae, mostly in the genus Thunnus. Tuna are fast swimmers, and some species are capable of speeds of . Unlike most fish, which have white flesh, the muscle tissue of tuna ranges from pink to dark red. The red coloration derives from myoglobin, an...
, chicken
Chicken
The chicken is a domesticated fowl, a subspecies of the Red Junglefowl. As one of the most common and widespread domestic animals, and with a population of more than 24 billion in 2003, there are more chickens in the world than any other species of bird...
, or turkey
Turkey
Turkey , known officially as the Republic of Turkey , is a Eurasian country located in Western Asia and in East Thrace in Southeastern Europe...
, among other options.
The source of this article is wikipedia, the free encyclopedia.  The text of this article is licensed under the GFDL.