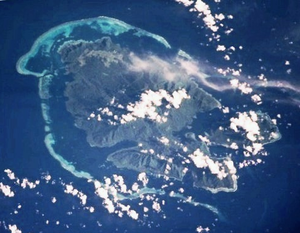 The name Vanikoro is always used as though it referred to a single island, due to both its geophysical and cultural unity. However, technically it is a group of several nearby islands surrounded by a single belt of coral reef
Coral reef
Coral reefs are underwater structures made from calcium carbonate secreted by corals. Coral reefs are colonies of tiny living animals found in marine waters that contain few nutrients. Most coral reefs are built from stony corals, which in turn consist of polyps that cluster in groups. The polyps...
. Only the two major islands are inhabited: the bigger one Banie
Banie (island)
Banie is the main island of the Vanikoro group, in the Temotu province of the Solomon Islands. The only other inhabited island of the group is the smaller island of Teanu ou Tevai.-Name:...
, and the smaller one Teanu
Teanu (island)
Teanu is the second island in size of the Vanikoro group, in the Temotu province of the Solomon Islands. It is located northeast of the main island of the group, Banie.Teanu has currently only one inhabited village, Puma....
(or Tevai). Other, uninhabited islets in the Vanikoro group include Manieve, Nomianu and Nanunga. The total area of the Vanikoro group is 173 km².

The 800 inhabitants of Vanikoro consist of two different populations, who tend to live separately. The Melanesian majority, about 600 people, are the descendants of the original population of Vanikoro. A minority of about 200 individuals are of Polynesian
Polynesians
The Polynesian peoples is a grouping of various ethnic groups that speak Polynesian languages, a branch of the Oceanic languages within the Austronesian languages, and inhabit Polynesia. They number approximately 1,500,000 people...
descent; for the last few centuries they have established settlements on the southern coast of Banie, even though they still preserve close links with Tikopia
Tikopia
Tikopia is a small and high island in the southwestern Pacific Ocean. Covering an area of 5 km² , the island is the remnant of an extinct volcano. Its highest point, Mt. Reani, reaches an elevation of 380 m above sea level. Lake Te Roto covers an old volcanic crater which is 80 m...
, an island lying 200 km eastwards, and which identify as their origin.

The three languages spoken by the Melanesian population of Vanikoro are all Oceanic, of the Temotu subgroup
Temotu languages
The Temotu languages, named after Temotu Province of the Solomon Islands, are a branch of Oceanic languages proposed in Ross & Næss 2007 for the Reefs – Santa Cruz languages...
: Teanu
Teanu language
Teanu is the main language spoken on the island of Vanikoro, in the easternmost province of the Solomon Islands.Some information on Teanu, as well as on the two other languages of the island, can be found in .-Name:...
or Buma; Lovono or Vano; and Tanema. The Tikopian settlers speak a Polynesian language, Tikopian
Tikopia language
The Tikopia language is a Polynesian Outlier language from the island of Tikopia in the Solomon Islands. It is closely related to the Anuta language of the neighboring island of Anuta. Tikopian is also spoken by the Polynesian minority on Vanikoro, who long ago migrated from Tikopia.-External...
or fakatikopia.

French
France
The French Republic , The French Republic , The French Republic , (commonly known as France , is a unitary semi-presidential republic in Western Europe with several overseas territories and islands located on other continents and in the Indian, Pacific, and Atlantic oceans. Metropolitan France...
explorer Jean-François de La Pérouse
Jean-François de Galaup, comte de La Pérouse
Jean François de Galaup, comte de Lapérouse was a French Navy officer and explorer whose expedition vanished in Oceania.-Early career:...
was stranded on Vanikoro after both his vessels, La Boussole and the Astrolabe, struck the then unknown reefs of the island in 1788. It is reported that some of the men were killed by the local inhabitants, whilst the surviving sailors built a smaller vessel and left the island, but were never seen again. Those that remained on the island died before search parties arrived in 1826. Jules Verne
Jules Verne
Jules Gabriel Verne was a French author who pioneered the science fiction genre. He is best known for his novels Twenty Thousand Leagues Under the Sea , A Journey to the Center of the Earth , and Around the World in Eighty Days...
dedicates a chapter of his novel Twenty Thousand Leagues Under the Sea
Twenty Thousand Leagues Under the Sea
Twenty Thousand Leagues Under the Sea is a classic science fiction novel by French writer Jules Verne published in 1870. It tells the story of Captain Nemo and his submarine Nautilus as seen from the perspective of Professor Pierre Aronnax...
to this event.
The source of this article is wikipedia, the free encyclopedia.  The text of this article is licensed under the GFDL.