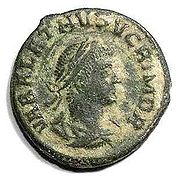 Lucius Iulius Aurelius Septimius Vabalathus Athenodorus (266-273) was a king of the Palmyrene Empire
Palmyrene Empire
The Palmyrene Empire was a splinter empire, that broke off of the Roman Empire during the Crisis of the Third Century. It encompassed the Roman provinces of Syria Palaestina, Egypt and large parts of Asia Minor....
. Vabalathus is the Latinized form of his name in the Arabic language
Arabic language
Arabic is a name applied to the descendants of the Classical Arabic language of the 6th century AD, used most prominently in the Quran, the Islamic Holy Book...
, Wahb Allat (وهب اللات) or gift of the Goddess. As the Arabian goddess Allāt
Allāt
' or ' was a Pre-Islamic Arabian goddess who was one of the three chief goddesses of Mecca. She is mentioned in the Qur'an , which indicates that pre-Islamic Arabs considered her as one of the daughters of Allah along with Manāt and al-‘Uzzá....
came to be identified with Athena, he used Athenodorus as the Greek form of his name.

His father was King of Palmyra, Septimius Odaenathus
Odaenathus
Lucius Septimius Odaenathus, Odenathus or Odenatus , the Latinized form of the Syriac Odainath, was a ruler of Palmyra, Syria and later of the short lived Palmyrene Empire, in the second half of the 3rd century, who succeeded in recovering the Roman East from the Persians and restoring it to the...
and his mother was Queen Zenobia
Zenobia
Zenobia was a 3rd-century Queen of the Palmyrene Empire in Roman Syria. She led a famous revolt against the Roman Empire. The second wife of King Septimius Odaenathus, Zenobia became queen of the Palmyrene Empire following Odaenathus' death in 267...
. When his father was assassinated by his cousin Maeonius
Maeonius
Maeonius , or Maconius, was a short-lived Roman usurper. He is also known with the names of Odaenathus and Rufinus Maeonius (d. 266/267), or Maconius, was a short-lived Roman usurper. He is also known with the names of Odaenathus (Syncellus I p717) and Rufinus Maeonius (d. 266/267), or Maconius,...
(267), the young Vabalathus was made king (rex consul imperator dux Romanorum, "illustrious King of Kings" and corrector
Corrector
A corrector is a person who or object that practices correction, usually by removing or rectifying errors.The word is originally a Roman title corrector, derived from the Latin verb corrigēre, meaning "an action to rectify, to make right a wrong."Apart from the general sense of anyone who corrects...
totius orientis) of the Palmyrene Empire. Power was wielded by his mother Zenobia. Zenobia conquered Egypt
Egypt
Egypt , officially the Arab Republic of Egypt, Arabic: , is a country mainly in North Africa, with the Sinai Peninsula forming a land bridge in Southwest Asia. Egypt is thus a transcontinental country, and a major power in Africa, the Mediterranean Basin, the Middle East and the Muslim world...
, Syria
Syria
Syria , officially the Syrian Arab Republic , is a country in Western Asia, bordering Lebanon and the Mediterranean Sea to the West, Turkey to the north, Iraq to the east, Jordan to the south, and Israel to the southwest....
, Palestine
Palestine
Palestine is a conventional name, among others, used to describe the geographic region between the Mediterranean Sea and the Jordan River, and various adjoining lands....
, Anatolia
Anatolia
Anatolia is a geographic and historical term denoting the westernmost protrusion of Asia, comprising the majority of the Republic of Turkey...
and Lebanon
Lebanon
Lebanon , officially the Republic of LebanonRepublic of Lebanon is the most common term used by Lebanese government agencies. The term Lebanese Republic, a literal translation of the official Arabic and French names that is not used in today's world. Arabic is the most common language spoken among...
.

Initially Roman Emperor
Roman Emperor
The Roman emperor was the ruler of the Roman State during the imperial period . The Romans had no single term for the office although at any given time, a given title was associated with the emperor...
Aurelian
Aurelian
Aurelian , was Roman Emperor from 270 to 275. During his reign, he defeated the Alamanni after a devastating war. He also defeated the Goths, Vandals, Juthungi, Sarmatians, and Carpi. Aurelian restored the Empire's eastern provinces after his conquest of the Palmyrene Empire in 273. The following...
recognized Vabalathus' rule, perhaps because he was engaged in conflict with the Gallic Empire
Gallic Empire
The Gallic Empire is the modern name for a breakaway realm that existed from 260 to 274. It originated during the Roman Empire's Crisis of the Third Century....
in the west and hesitated to incite open warfare with the Palmyrene Empire. This mutual recognition is testified by early coins minted under Vaballathus, in which Aurelian is portraited with the title augustus
Augustus (honorific)
Augustus , Latin for "majestic," "the increaser," or "venerable", was an Ancient Roman title, which was first held by Gaius Julius Caesar Augustus , and subsequently came to be considered one of the titles of what are now known as the Roman Emperors...
; however, the relationship between the two empires deteriorated and Aurelian disappeared from his coins, while Zenobia and Vabalathus and adopted the titles of augusta
Augusta (honorific)
Augusta was the imperial honorific title of empresses. It was given to the women of the Roman and Byzantine imperial families. In the third century, Augustae could also receive the titles of Mater castrorum and Mater Patriae .The title implied the greatest prestige, with the Augustae able to...
and augustus respectively.

The end of Vabalathus' rule came when Aurelian conquered and sacked Palmyra
Palmyra
Palmyra was an ancient city in Syria. In the age of antiquity, it was an important city of central Syria, located in an oasis 215 km northeast of Damascus and 180 km southwest of the Euphrates at Deir ez-Zor. It had long been a vital caravan city for travellers crossing the Syrian desert...
(272/3) and took Vabalathus and his mother back to Rome
Rome
Rome is the capital of Italy and the country's largest and most populated city and comune, with over 2.7 million residents in . The city is located in the central-western portion of the Italian Peninsula, on the Tiber River within the Lazio region of Italy.Rome's history spans two and a half...
as hostages. According to Zosimus
Zosimus
Zosimus was a Byzantine historian, who lived in Constantinople during the reign of the Byzantine Emperor Anastasius I . According to Photius, he was a comes, and held the office of "advocate" of the imperial treasury.- Historia Nova :...
, Vaballathus died on the way to Rome.

According to other historians the Roman emperor Aurelian was an excellent military tactician and a talented administrator. He was also one of the most merciful Roman emperors in history. He allowed both rebels to live after they marched in his triumph. In fact, Aurelian gave Zenobia the status of a Roman matron and a nice villa to which she was allowed to retire.