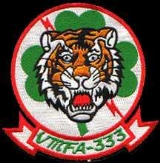 Encyclopedia
Marine Fighter Attack Squadron 333 (VMFA-333) was a United States Marine Corps
United States Marine Corps
The United States Marine Corps is a branch of the United States Armed Forces responsible for providing power projection from the sea, using the mobility of the United States Navy to deliver combined-arms task forces rapidly. It is one of seven uniformed services of the United States...
fighter squadron consisting of F/A-18 Hornet
F/A-18 Hornet
The McDonnell Douglas F/A-18 Hornet is a supersonic, all-weather carrier-capable multirole fighter jet, designed to dogfight and attack ground targets . Designed by McDonnell Douglas and Northrop, the F/A-18 was derived from the latter's YF-17 in the 1970s for use by the United States Navy and...
s . Known as the "Fighting Shamrocks" and “Trip Trey”, the squadron participated in action during World War II
World War II
World War II, or the Second World War , was a global conflict lasting from 1939 to 1945, involving most of the world's nations—including all of the great powers—eventually forming two opposing military alliances: the Allies and the Axis...
, the Vietnam War
Vietnam War
The Vietnam War was a Cold War-era military conflict that occurred in Vietnam, Laos, and Cambodia from 1 November 1955 to the fall of Saigon on 30 April 1975. This war followed the First Indochina War and was fought between North Vietnam, supported by its communist allies, and the government of...
and Operation Desert Storm The squadron’s aircraft were easily recognizable by the row of three shamrocks painted on the vertical stabilizer
Vertical stabilizer
The vertical stabilizers, vertical stabilisers, or fins, of aircraft, missiles or bombs are typically found on the aft end of the fuselage or body, and are intended to reduce aerodynamic side slip. It is analogical to a skeg on boats and ships.On aircraft, vertical stabilizers generally point upwards...
s of their aircraft. They were decommissioned on March 31, 1992.

Marine Scout Bombing Squadron 333 (VMSB-333) was activated August 1, 1943 as at Marine Corps Air Station Cherry Point
Marine Corps Air Station Cherry Point
Marine Corps Air Station Cherry Point or MCAS Cherry Point is a United States Marine Corps airfield located in Havelock, North Carolina, USA, in the eastern part of the state...
, North Carolina
North Carolina
North Carolina is a state located in the southeastern United States. The state borders South Carolina and Georgia to the south, Tennessee to the west and Virginia to the north. North Carolina contains 100 counties. Its capital is Raleigh, and its largest city is Charlotte...
. In April 1944, a portion of the squadron was sent to Boca Chica, Florida for anti-submarine training and upon their return departed for San Diego, and three weeks after that, Hawaii
Hawaii
Hawaii is the newest of the 50 U.S. states , and is the only U.S. state made up entirely of islands. It is the northernmost island group in Polynesia, occupying most of an archipelago in the central Pacific Ocean, southwest of the continental United States, southeast of Japan, and northeast of...
. The squadron was transferred to Midway Island
Midway Atoll
Midway Atoll is a atoll in the North Pacific Ocean, near the northwestern end of the Hawaiian archipelago, about one-third of the way between Honolulu, Hawaii, and Tokyo, Japan. Unique among the Hawaiian islands, Midway observes UTC-11 , eleven hours behind Coordinated Universal Time and one hour...
in July 1944 and began flying anti-submarine patrols in their SBD Dauntless
SBD Dauntless
The Douglas SBD Dauntless was a naval dive bomber made by Douglas during World War II. The SBD was the United States Navy's main dive bomber from mid-1940 until late 1943, when it was largely replaced by the SB2C Helldiver...
bombers. They were redesignated Marine Fighter Bomber Squadron 333 (VMBF-333) on October 14, 1944 and transitioned to the F4U Corsair
F4U Corsair
The Vought F4U Corsair was a carrier-capable fighter aircraft that saw service primarily in World War II and the Korean War. Demand for the aircraft soon overwhelmed Vought's manufacturing capability, resulting in production by Goodyear and Brewster: Goodyear-built Corsairs were designated FG and...
.

They were reactivated on August 1, 1952 as Marine Attack Squadron 333 (VMA-333) and located at Marine Corps Air Station Miami and equipped with the Grumman F6F Hellcat
F6F Hellcat
The Grumman F6F Hellcat was a carrier-based fighter aircraft developed to replace the earlier F4F Wildcat in United States Navy service. Although the F6F resembled the Wildcat, it was a completely new design powered by a 2,000 hp Pratt & Whitney R-2800. Some tagged it as the "Wildcat's big...
. The Hellcats were quickly replaced with Corsairs and they were in turn replaced with A-1 Skyraider
A-1 Skyraider
The Douglas A-1 Skyraider was an American single-seat attack aircraft that saw service between the late 1940s and early 1980s. It became a piston-powered, propeller-driven anachronism in the jet age, and was nicknamed "Spad", after a French World War I fighter...
s. The Squadron was redesignated Marine Fighter Squadron 333 (VMF-333) on January 28, 1957 and again transitioned airframes, this time to the FJ Fury
FJ Fury
The North American FJ-2/-3 Fury were a series of swept-wing carrier-capable fighters for the United States Navy and Marine Corps. Based on the United States Air Force's F-86 Sabre, these aircraft featured folding wings, and a longer nose landing strut designed to both increase angle of attack upon...
. At this time the squadron also relocated to Marine Corps Air Station Beaufort
Marine Corps Air Station Beaufort
Marine Corps Air Station Beaufort or MCAS Beaufort is a United States Marine Corps air base located three miles northwest of the central business district of Beaufort, a city in Beaufort County, South Carolina, United States...
, South Carolina
South Carolina
South Carolina is a state in the Deep South of the United States that borders Georgia to the south, North Carolina to the north, and the Atlantic Ocean to the east. Originally part of the Province of Carolina, the Province of South Carolina was one of the 13 colonies that declared independence...
. 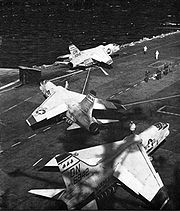 Three years later VMF-333 became the first Marine Corps squadron to receive the F-8 Crusader
F-8 Crusader
The Vought F-8 Crusader was a single-engine, supersonic, carrier-based air superiority jet aircraft built by Vought for the United States Navy and the U.S. Marine Corps, replacing the Vought F7U Cutlass...
.
On August the 14th 1962 the squadron performed a non-stop air refuelled deployment to Naval Air Station Roosevelt Road, Puerto Rico and Guantanamo Bay, Cuba. Of the 22 aircraft in the squadron 4 were initially stationed at Gitmo as armed Hot Pad Alert aircraft. The rest of the reinforced squadron (parts of Marine Air Base Squadron 32 and Headquarters and Maintenance Squadron 32 were attached) at Roosy engaged in advanced tactics, gunnery and missile training while living in a tent city that served as a deployment test site. The squadron was already in position when the Cuban Missile Crisis erupted in October and the aircraft numbers at Gitmo were reinforced should the need have arisen to strike targets in Cuba. During the crisis VMF-333 was joined by Marine Attack Squadron 331 and assumed tactical command over Puerto Rico's Air National Guard F86 aircraft as a combined Puerto Rico Air Defense Command. Trip Tree returned to MCAS Beaufort in December of that year after the crisis was resolved.

On February 1, 1966, The squadron was again redesignated as Marine All Weather Fighter Squadron 333 (VMF(AW)-333) when they received new all-weather versions of the F-8 Crusader. The squadrons last name change came on June 20, 1966 when they became Marine Fighter Attack Squadron 333 (VMFA-333) as they transitioned to the F-4 Phantom II
F-4 Phantom II
The McDonnell Douglas F-4 Phantom II is a tandem two-seat, twin-engined, all-weather, long-range supersonic jet interceptor fighter/fighter-bomber originally developed for the United States Navy by McDonnell Aircraft. It first entered service in 1960 with the U.S. Navy. Proving highly adaptable,...
. In June 1972, VMFA-333 deployed on board the USS America (CVA-66) and conducted mission over Vietnam
Vietnam
Vietnam – sometimes spelled Viet Nam , officially the Socialist Republic of Vietnam – is the easternmost country on the Indochina Peninsula in Southeast Asia. It is bordered by China to the north, Laos to the northwest, Cambodia to the southwest, and the South China Sea –...
. It was during this deployment that the squadron got its only air to air kill when Major Lee.T. Lasseter along with his RIO, Capt. John D. Cummings shot down a MiG-21 over North Vietnam
North Vietnam
The Democratic Republic of Vietnam , was a communist state that ruled the northern half of Vietnam from 1954 until 1976 following the Geneva Conference and laid claim to all of Vietnam from 1945 to 1954 during the First Indochina War, during which they controlled pockets of territory throughout...
, near Hanoi. After the shoot down both aircraft were damaged by flak and an SA-2 SAM, which hit 5526 in the tail section. Close to running out of fuel and with 5526 on fire from the SAM hit, the pilots ejected just south of Haiphong Harbor
Haiphong
, also Haiphong, is the third most populous city in Vietnam. The name means, "coastal defence".-History:Hai Phong was originally founded by Lê Chân, the female general of a Vietnamese revolution against the Chinese led by the Trưng Sisters in the year 43 C.E.The area which is now known as Duong...
. The incident was also the first and only all-Marine kill during the Vietnam War. Two other Marines shot down MiGs but they were on exchange with the Air Force
United States Air Force
The United States Air Force is the aerial warfare service branch of the United States Armed Forces and one of the American uniformed services. Initially part of the United States Army, the USAF was formed as a separate branch of the military on September 18, 1947 under the National Security Act of...
. For the rest of the 1970s, the squadron remained affiliated with Carrier Air Wing 8 and made several deployments aboard the USS Nimitz (CVN-68).
Major Lee T. Lasseter later assumed command of VMFA-333 and was named Marine Aviator of the year for 1972.

VMFA-333 was the last regular Marine squadron to operate the F-4 Phantom but finally transferred to the F/A-18 Hornet
F/A-18 Hornet
The McDonnell Douglas F/A-18 Hornet is a supersonic, all-weather carrier-capable multirole fighter jet, designed to dogfight and attack ground targets . Designed by McDonnell Douglas and Northrop, the F/A-18 was derived from the latter's YF-17 in the 1970s for use by the United States Navy and...
in October 1987. During their final deployment to the Persian Gulf
Persian Gulf
The Persian Gulf, in Southwest Asia, is an extension of the Indian Ocean located between Iran and the Arabian Peninsula.The Persian Gulf was the focus of the 1980–1988 Iran-Iraq War, in which each side attacked the other's oil tankers...
in 1990-1991 as part of Operation Desert Storm, the Shamrocks flew more than seven hundred combat missions without loss and delivered more than two million pounds of ordnance against Iraqi forces. VMFA-333 was deactivated effective March 31, 1992.