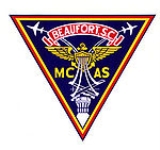 Naval Air Station Beaufort was commissioned on June 15, 1943 for advanced training operations of anti-submarine patrols during World War II
World War II
World War II, or the Second World War , was a global conflict lasting from 1939 to 1945, involving most of the world's nations—including all of the great powers—eventually forming two opposing military alliances: the Allies and the Axis...
. It was then deactivated in 1946 and reactivated in 1956. On March 1, 1960, it was re-designated Marine Corps Air Station Beaufort. On September 19, 1975, the airfield was named Merritt Field in honor of Major General Lewie G. Merritt
Lewie G. Merritt
Lewie G. Merritt was a major general and early aviator in the United States Marine Corps. Merritt served over 30 years in the Marine Corps, including service in World War I at Belleau Wood and as an aviator during World War II in both the European and Pacific Theaters...
, USMC, a 1917 graduate of The Citadel, The Military College of South Carolina. He was from Ridge Spring, South Carolina
Ridge Spring, South Carolina
Ridge Spring is a town in Saluda County, South Carolina, United States. The population was 823 at the 2000 census. It is part of the Columbia, South Carolina Metropolitan Statistical Area.-Geography:Ridge Spring is located at ....
.

The air station encompasses 6,900 acres (28 km²). It is also associated with a large air-to-air combat area off the coast of South Carolina
South Carolina
South Carolina is a state in the Deep South of the United States that borders Georgia to the south, North Carolina to the north, and the Atlantic Ocean to the east. Originally part of the Province of Carolina, the Province of South Carolina was one of the 13 colonies that declared independence...
and Georgia
Georgia (U.S. state)
Georgia is a state located in the southeastern United States. It was established in 1732, the last of the original Thirteen Colonies. The state is named after King George II of Great Britain. Georgia was the fourth state to ratify the United States Constitution, on January 2, 1788...
as well as a 5,200 acre (21 km²) air-to-ground combat and bombing range in McIntosh County, Georgia
McIntosh County, Georgia
McIntosh County is a county located in the U.S. state of Georgia. It is part of the Brunswick, Georgia, Metropolitan Statistical Area which encompasses all of McIntosh, Glynn, and Brantley counties. As of 2010, the population is 14,333. The county seat is Darien.-History:McIntosh County was split...
. Also attached to the base is the housing complex of Laurel Bay
Laurel Bay, South Carolina
Laurel Bay is a census-designated place and military housing complex in Beaufort County, South Carolina, United States. The population was 5,891 at the 2010 census. As defined by the U.S...
, just 3 miles (5 km) from the station, that provides family housing for area servicemembers.

MCAS Beaufort's nickname is "Fightertown East." MCAS Miramar
Marine Corps Air Station Miramar
Marine Corps Air Station Miramar , formerly Naval Air Station Miramar is a United States Marine Corps installation that is home to the 3rd Marine Aircraft Wing, which is the aviation element of the 1st Marine Expeditionary Force...
in San Diego, California
San Diego, California
San Diego is the eighth-largest city in the United States and second-largest city in California. The city is located on the coast of the Pacific Ocean in Southern California, immediately adjacent to the Mexican border. The birthplace of California, San Diego is known for its mild year-round...
is the more commonly known "Fightertown", also called "Fightertown USA", the latter having acquired the nickname when it was under Navy control as NAS Miramar.