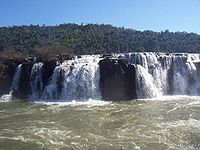 The Uruguay River is a river
River
A river is a natural watercourse, usually freshwater, flowing towards an ocean, a lake, a sea, or another river. In a few cases, a river simply flows into the ground or dries up completely before reaching another body of water. Small rivers may also be called by several other names, including...
in South America
South America
South America is a continent situated in the Western Hemisphere, mostly in the Southern Hemisphere, with a relatively small portion in the Northern Hemisphere. The continent is also considered a subcontinent of the Americas. It is bordered on the west by the Pacific Ocean and on the north and east...
. It flows from north to south and makes boundary with Brazil
Brazil
Brazil , officially the Federative Republic of Brazil , is the largest country in South America. It is the world's fifth largest country, both by geographical area and by population with over 192 million people...
, Argentina
Argentina
Argentina , officially the Argentine Republic , is the second largest country in South America by land area, after Brazil. It is constituted as a federation of 23 provinces and an autonomous city, Buenos Aires...
, and Uruguay
Uruguay
Uruguay ,officially the Oriental Republic of Uruguay,sometimes the Eastern Republic of Uruguay; ) is a country in the southeastern part of South America. It is home to some 3.5 million people, of whom 1.8 million live in the capital Montevideo and its metropolitan area...
, separating some of the Argentine provinces of the Mesopotamia
Mesopotamia, Argentina
La Mesopotamia, Región Mesopotámica is the humid and verdant area of north-east Argentina, comprising the provinces of Misiones, Entre Ríos and Corrientes. The region called Litoral consists of the Mesopotamia and the provinces of Chaco, Formosa and Santa Fe...
from the other two countries. It passes between the states of Santa Catarina
Santa Catarina (state)
Santa Catarina is a state in southern Brazil with one of the highest standards of living in Latin America. Its capital is Florianópolis, which mostly lies on the Santa Catarina Island. Neighbouring states are Rio Grande do Sul to the south and Paraná to the north. It is bounded on the east by...
and Rio Grande do Sul
Rio Grande do Sul
Rio Grande do Sul is the southernmost state in Brazil, and the state with the fifth highest Human Development Index in the country. In this state is located the southernmost city in the country, Chuí, on the border with Uruguay. In the region of Bento Gonçalves and Caxias do Sul, the largest wine...
in Brazil; forms the eastern border of the provinces of Misiones
Misiones Province
Misiones is one of the 23 provinces of Argentina, located in the northeastern corner of the country in the Mesopotamiсa region. It is surrounded by Paraguay to the northwest, Brazil to the north, east and south, and Corrientes Province of Argentina to the southwest.- History :The province was...
, Corrientes
Corrientes Province
Corrientes is a province in northeast Argentina, in the Mesopotamia region. It is surrounded by : Paraguay, the province of Misiones, Brazil, Uruguay, and the provinces of Entre Rios, Santa Fe and Chaco.-History:...
, and Entre Ríos
Entre Ríos Province
Entre Ríos is a northeastern province of Argentina, located in the Mesopotamia region. It borders the provinces of Buenos Aires , Corrientes and Santa Fe , and Uruguay in the east....
in Argentina; and makes up the western borders of the departments of Artigas
Artigas Department
The Department of Artigas , with an area of and 78,019 inhabitants, it is the northernmost department of Uruguay. Its capital is Artigas.It is named after José Artigas , leader of the orientales during the wars of Independence.-Geography and climate:Neighbouring departments are Salto to the...
, Salto
Salto Department
Salto Department is a department of Uruguay. Its capital is Salto.-Population and Demographics:As of the census of 2004, there were 123,120 people and 34,441 households in the department. The average household size was 3.5...
, Paysandú
Paysandú Department
Paysandú Department is a department of Uruguay. Its capital is Paysandú. Its name origin is debated but is likely to be of charrua origin.The fertile soils of Paysandú have encouraged much agricultural development. Livestock raising is one of the principal agricultural activities, with cattle...
, Río Negro
Río Negro Department
The Río Negro Department is an administrative division of Uruguay located in the west of the country. It has 53,989 inhabitants and an area of 9,282 km² . Its capital is Fray Bentos.-Geography and climate:...
, Soriano
Soriano Department
Soriano is a department of Uruguay. Its capital is Mercedes.-Population and Demographics:As of the census of 2004, there were 84,563 people and 26,105 households in the department. The average household size was 3.2...
, and Colonia
Colonia Department
Colonia is a departamento in southwestern Uruguay. Its capital is Colonia del Sacramento, the country's second oldest city.-Economy:The region is the main producer of dairy products in Uruguay...
in Uruguay.

The river measures about 1600 kilometres (994.2 mi) in length and starts in the Serra do Mar in Brazil, where the Canoas River and the Pelotas River are joined, at about 200 m above mean sea level
Above mean sea level
The term above mean sea level refers to the elevation or altitude of any object, relative to the average sea level datum. AMSL is used extensively in radio by engineers to determine the coverage area a station will be able to reach...
. In this stage the river goes through uneven, broken terrain, forming rapid
Rapid
A rapid is a section of a river where the river bed has a relatively steep gradient causing an increase in water velocity and turbulence. A rapid is a hydrological feature between a run and a cascade. A rapid is characterised by the river becoming shallower and having some rocks exposed above the...
s and falls. Its course through Rio Grande do Sul is not navigable.

Together with the Paraná River
Paraná River
The Paraná River is a river in south Central South America, running through Brazil, Paraguay and Argentina for some . It is second in length only to the Amazon River among South American rivers. The name Paraná is an abbreviation of the phrase "para rehe onáva", which comes from the Tupi language...
, the Uruguay forms the Río de la Plata
Río de la Plata
The Río de la Plata —sometimes rendered River Plate in British English and the Commonwealth, and occasionally rendered [La] Plata River in other English-speaking countries—is the river and estuary formed by the confluence of the Uruguay River and the Paraná River on the border between Argentina and...
estuary
Estuary
An estuary is a partly enclosed coastal body of water with one or more rivers or streams flowing into it, and with a free connection to the open sea....
. It is navigable from around Salto Chico. Its main tributary
Tributary
A tributary or affluent is a stream or river that flows into a main stem river or a lake. A tributary does not flow directly into a sea or ocean...
is the Río Negro
Río Negro (Uruguay)
The Río Negro is the most important river in Uruguay. It originates in the southern highlands of Brazil, just east of Bagé, and flows west across the entire width of Uruguay to the Uruguay River. The course of the Río Negro across Uruguay effectively divides the south of the country from the north...
, which is born in the south of Brazil and goes through Uruguay 500 km until its confluence
Confluence (geography)
In geography, a confluence is the meeting of two or more bodies of water. It usually refers to the point where two streams flow together, merging into a single stream...
with the Uruguay river, which is located 100 km north from the Uruguay's confluence with the Río de la Plata, in Punta Gorda (Colonia Department, Uruguay).

The drainage basin
Drainage basin
A drainage basin is an extent or an area of land where surface water from rain and melting snow or ice converges to a single point, usually the exit of the basin, where the waters join another waterbody, such as a river, lake, reservoir, estuary, wetland, sea, or ocean...
of the Uruguay River has an area of 365000 square kilometres (140,927.3 sq mi). Its main economic use is the generation of hydroelectricity
Hydroelectricity
Hydroelectricity is the term referring to electricity generated by hydropower; the production of electrical power through the use of the gravitational force of falling or flowing water. It is the most widely used form of renewable energy...
and it is dammed in its lower portion by the Salto Grande Dam
Salto Grande Dam
The Salto Grande Dam is a large hydroelectric dam on the Uruguay River, located between Concordia, Argentina, and Salto, Uruguay; thus is shared between the two countries....
and by the Itá Dam upstream in Brazil.

The name of the river comes from the Spanish settlers' interpretation of the word the locals used to designate it. The original name, Urugua'ý, in Guaraní
Guaraní language
Guaraní, specifically the primary variety known as Paraguayan Guaraní , is an indigenous language of South America that belongs to the Tupí–Guaraní subfamily of the Tupian languages. It is one of the official languages of Paraguay , where it is spoken by the majority of the population, and half of...
, means "river of the painted birds".

Argentina and Uruguay are currently experiencing a conflict over the Uruguay River. Two European companies proposed to build cellulose
Cellulose
Cellulose is an organic compound with the formula , a polysaccharide consisting of a linear chain of several hundred to over ten thousand β linked D-glucose units....
-processing plants at Fray Bentos
Fray Bentos
Fray Bentos, the capital of the Río Negro Department of western Uruguay, is a port on the Uruguay River. It is close to the border with Argentina and about due north of Buenos Aires.-History:...
, Uruguay, opposite Gualeguaychú, Argentina. Since April 2010, residents of the latter as well as many others have protested, claiming that the plants will pollute the river shared by the two countries. At the turn of the year the conflict escalated into a diplomatic crisis, making one of the companies move the project 250 km south. Since December 2005, the international bridges linking the Argentine province of Entre Ríos
Entre Ríos Province
Entre Ríos is a northeastern province of Argentina, located in the Mesopotamia region. It borders the provinces of Buenos Aires , Corrientes and Santa Fe , and Uruguay in the east....
with Uruguay have been intermittently blockaded by Argentine protestors, causing major disruptions in commercial traffic and tourism.

The International Court of Justice completed hearings on October 2, 2009, between Argentina and Uruguay over the dispute. Judges from the Court will present their verdict in the beginning of 2010. Argentina believes the Finnish company Botnia is polluting the fish as well as the overall environment while Uruguay believes that the plant is not depositing a large amount of toxins in the Uruguay River. (AFP|http://www.google.com/hostednews/afp/article/ALeqM5gTc3ZWTskRnrf1J9zTNEuDtgSD1A)