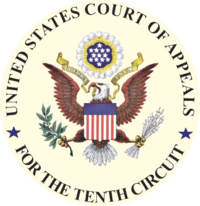 Congress created a new judicial circuit in 1929 to accommodate the increased caseload in the federal courts. Between 1866 and 1912, twelve new states had entered the Union and been incorporated into the Eighth and Ninth Circuits. The Eighth Circuit encompassed 13 states and had become the largest in the nation.

Chief Justice William Howard Taft
William Howard Taft
William Howard Taft was the 27th President of the United States and later the tenth Chief Justice of the United States...
suggested the reorganization of the Eight Circuit Court in response to widespread opposition in 1928 to a proposal to reorganize the nation's entire circuit structure. The original plan had sprung from an American Bar Association
American Bar Association
The American Bar Association , founded August 21, 1878, is a voluntary bar association of lawyers and law students, which is not specific to any jurisdiction in the United States. The ABA's most important stated activities are the setting of academic standards for law schools, and the formulation...
committee in 1925 and would have changed the composition of all but two circuits.

The House of Representatives considered two proposals to divide the existing Eighth Circuit. A bill by Representative Walter Newton
Walter Newton
Walter Hughes Newton was a United States Representative from Minnesota; born in Minneapolis, Hennepin County, Minnesota; attended the public schools and was graduated from the law department of the University of Minnesota at Minneapolis in 1905; was admitted to the bar the same year and commenced...
would separate the circuit’s eastern and western states. An alternate proposal divided the northern from the southern states. With the judges and bar of the existing Eighth Circuit for Newton's bill and little opposition to dividing the circuit, lawmakers focused on providing for more judgeships and meeting places of the circuit courts of appeals in their deliberations.


Current composition of the court

, the judges on the court are: