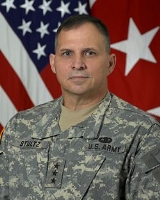 Jack Calvin Stultz, Jr. was born in Dillon, South Carolina. He attended Davidson College
Davidson College
Davidson College is a private liberal arts college in Davidson, North Carolina. The college has graduated 23 Rhodes Scholars and is consistently ranked in the top ten liberal arts colleges in the country by U.S. News and World Report magazine, although it has recently dropped to 11th in U.S. News...
in Davidson, North Carolina
Davidson, North Carolina
Davidson is a town in Mecklenburg County in the U.S. state of North Carolina. The population was 7,139 at the 2000 census. It is home to Davidson College...
, graduating with a Bachelor of Arts
Bachelor of Arts
A Bachelor of Arts , from the Latin artium baccalaureus, is a bachelor's degree awarded for an undergraduate course or program in either the liberal arts, the sciences, or both...
degree in history
History
History is the discovery, collection, organization, and presentation of information about past events. History can also mean the period of time after writing was invented. Scholars who write about history are called historians...
. He played and lettered in football from 1971 to 1973. Stultz entered active duty in 1974 after receiving his commission as an Engineer
United States Army Corps of Engineers
The United States Army Corps of Engineers is a federal agency and a major Army command made up of some 38,000 civilian and military personnel, making it the world's largest public engineering, design and construction management agency...
officer from the Reserve Officers' Training Corps
Reserve Officers' Training Corps
The Reserve Officers' Training Corps is a college-based, officer commissioning program, predominantly in the United States. It is designed as a college elective that focuses on leadership development, problem solving, strategic planning, and professional ethics.The U.S...
. After completing the Engineer Officer Basic Course and Airborne School
United States Army Airborne School
The United States Army Airborne School — widely known as Jump School — conducts the basic paratrooper training for the United States armed forces. It is operated by the 1st Battalion , 507th Infantry, United States Army Infantry School, Fort Benning, Georgia...
, he was assigned to the 20th Engineer Battalion, Fort Campbell
Fort Campbell
Fort Campbell is a United States Army installation located astraddle the Kentucky-Tennessee border between Hopkinsville, Kentucky, and Clarksville, Tennessee...
, Kentucky, and served as Platoon Leader
Platoon leader
A platoon leader or platoon commander is the officer in command of a platoon. This person is usually a junior officer — a second or first lieutenant, or an equivalent rank. The officer is usually assisted by a platoon sergeant...
, Executive Officer
Executive officer
An executive officer is generally a person responsible for running an organization, although the exact nature of the role varies depending on the organization.-Administrative law:...
, and Commander
Company Commander
A company commander is the commanding officer of a company, a military unit which typically consists of 100 to 350 soldiers, often organized into three or four smaller units called platoons....
, Company B, 20th Engineer Battalion.

Stultz left active duty in June 1979 to pursue a civilian career. He also began his Army Reserve career with assignment to the 108th Division (Infantry OSUT), headquartered in Charlotte, North Carolina
Charlotte, North Carolina
Charlotte is the largest city in the U.S. state of North Carolina and the seat of Mecklenburg County. In 2010, Charlotte's population according to the US Census Bureau was 731,424, making it the 17th largest city in the United States based on population. The Charlotte metropolitan area had a 2009...
. Stultz served in a variety of positions with the 108th Division, including Brigade Assistant Operations Officer, Battalion Personnel Officer, Commander, Company D, 4th Battalion 108th Regiment, and Division Assistant Operations Officer.

Stultz began his career with the Transportation Corps in February 1987 with an assignment to the 32d Transportation Group (Composite), which was mobilized and deployed in November 1990 in support of Operation Desert Shield/Desert Storm
Gulf War
The Persian Gulf War , commonly referred to as simply the Gulf War, was a war waged by a U.N.-authorized coalition force from 34 nations led by the United States, against Iraq in response to Iraq's invasion and annexation of Kuwait.The war is also known under other names, such as the First Gulf...
. Stultz was responsible for providing transportation support to XVIII Airborne Corps and VII Corps in Saudi Arabia
Saudi Arabia
The Kingdom of Saudi Arabia , commonly known in British English as Saudi Arabia and in Arabic as as-Sa‘ūdiyyah , is the largest state in Western Asia by land area, constituting the bulk of the Arabian Peninsula, and the second-largest in the Arab World...
, Iraq
Iraq
Iraq ; officially the Republic of Iraq is a country in Western Asia spanning most of the northwestern end of the Zagros mountain range, the eastern part of the Syrian Desert and the northern part of the Arabian Desert....
, and Kuwait
Kuwait
The State of Kuwait is a sovereign Arab state situated in the north-east of the Arabian Peninsula in Western Asia. It is bordered by Saudi Arabia to the south at Khafji, and Iraq to the north at Basra. It lies on the north-western shore of the Persian Gulf. The name Kuwait is derived from the...
. Stultz assumed responsibilities as the Group Executive Officer after returning from the desert in July 1991.

He took command of the 257th Transportation Battalion (Movement Control) in 1995. The battalion deployed to the Balkans in March 1997 in support of Operation Joint Endeavor/Joint Guard, providing movement control support for operations in Hungary
Hungary
Hungary , officially the Republic of Hungary , is a landlocked country in Central Europe. It is situated in the Carpathian Basin and is bordered by Slovakia to the north, Ukraine and Romania to the east, Serbia and Croatia to the south, Slovenia to the southwest and Austria to the west. The...
, Croatia
Croatia
Croatia , officially the Republic of Croatia , is a unitary democratic parliamentary republic in Europe at the crossroads of the Mitteleuropa, the Balkans, and the Mediterranean. Its capital and largest city is Zagreb. The country is divided into 20 counties and the city of Zagreb. Croatia covers ...
, and Bosnia
Bosnia and Herzegovina
Bosnia and Herzegovina , sometimes called Bosnia-Herzegovina or simply Bosnia, is a country in Southern Europe, on the Balkan Peninsula. Bordered by Croatia to the north, west and south, Serbia to the east, and Montenegro to the southeast, Bosnia and Herzegovina is almost landlocked, except for the...
.

He took command of the 32d Transportation Group in 1998, and served in this capacity until assuming duties as Deputy Commanding General, 143d Transportation Command in 1999.

Stultz deployed to Kuwait in October 2002 as Commander, 143d Transportation Command (Forward), establishing initial logistics operations in support of Operation Iraqi Freedom. Moving forward into Iraq with the initial ground offensive, he established the first forward logistics hub at Tallil
Ali Air Base
Ali Air Base is a military airbase located near Nasiriyah, Iraq. It is also known as Tallil Air Base. At present, the base is being used by United States Armed Forces. It is called Camp Adder by the U.S. Army; the name "Ali Air Base" is used chiefly by the U.S...
and initial rail operations at Garma, located west of Baghdad. In October 2003, he was assigned as Director of Movements, Distribution, and Transportation, Coalition Forces Land Component Command-Kuwait
Coalition Forces Land Component Command
Coalition Forces Land Component Command, or CFLCC, is a generic U.S. and allied military term. In U.S. military terminology, Unified Combatant Commands or Joint Task Forces can have components from all services and components – Army ~ Land, Air, Naval, Marine, and Special Operations...
, responsible for the deployment and redeployment of sustainment supplies for United States and Coalition forces in Kuwait and Iraq. From January to August 2004, he was responsible for port and ground transportation operations for the largest movement of forces since World War II, more commonly known as a "surge." Stultz returned to the United States in August 2004 after 22 months in theater
Theater (warfare)
In warfare, a theater, is defined as an area or place within which important military events occur or are progressing. The entirety of the air, land, and sea area that is or that may potentially become involved in war operations....
.

In October 2004, Stultz was promoted to the rank of Major General
Major general (United States)
In the United States Army, United States Marine Corps, and United States Air Force, major general is a two-star general-officer rank, with the pay grade of O-8. Major general ranks above brigadier general and below lieutenant general...
and assumed command of the 143d Transportation Command in Orlando, Florida
Orlando, Florida
Orlando is a city in the central region of the U.S. state of Florida. It is the county seat of Orange County, and the center of the Greater Orlando metropolitan area. According to the 2010 US Census, the city had a population of 238,300, making Orlando the 79th largest city in the United States...
, which provided command and control to twelve units in the southeastern United States.