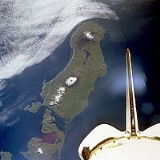 Encyclopedia
Unimak Island is the largest island
Island
An island or isle is any piece of sub-continental land that is surrounded by water. Very small islands such as emergent land features on atolls can be called islets, cays or keys. An island in a river or lake may be called an eyot , or holm...
in the Aleutian Islands chain of the U.S. state
U.S. state
A U.S. state is any one of the 50 federated states of the United States of America that share sovereignty with the federal government. Because of this shared sovereignty, an American is a citizen both of the federal entity and of his or her state of domicile. Four states use the official title of...
of Alaska
Alaska
Alaska is the largest state in the United States by area. It is situated in the northwest extremity of the North American continent, with Canada to the east, the Arctic Ocean to the north, and the Pacific Ocean to the west and south, with Russia further west across the Bering Strait...
. It is the easternmost island in the Aleutians and, with an area of 1,571.41 mi² (4,069.9 km²), the ninth largest island in the United States and the 134th largest island in the world. It is home to Mount Shishaldin
Mount Shishaldin
Mount Shishaldin is a moderately active volcano on Unimak Island in the Aleutian Islands chain of Alaska. It is the tallest mountain in the Aleutian Islands. The most symmetrical cone-shaped glacier-clad large mountain on earth, the volcano's topographic contour lines are nearly perfect circles...
, one of the ten most active volcano
Volcano
2. Bedrock3. Conduit 4. Base5. Sill6. Dike7. Layers of ash emitted by the volcano8. Flank| 9. Layers of lava emitted by the volcano10. Throat11. Parasitic cone12. Lava flow13. Vent14. Crater15...
es in the world. According to the United States Census Bureau
United States Census Bureau
The United States Census Bureau is the government agency that is responsible for the United States Census. It also gathers other national demographic and economic data...
, there were 64 people living on Unimak as of the 2000 census
United States Census, 2000
The Twenty-second United States Census, known as Census 2000 and conducted by the Census Bureau, determined the resident population of the United States on April 1, 2000, to be 281,421,906, an increase of 13.2% over the 248,709,873 persons enumerated during the 1990 Census...
, all of them in the city of False Pass
False Pass, Alaska
False Pass is a city in Aleutians East Borough, Alaska, United States. Isanax̂ is the Aleut name for present day Isanotski Strait and means gap, hole, rent, or tear in the Aleut language which was rendered as Isanotski in transliterated Russian...
at the eastern end of the island. Cape Lutke
Cape Lutke, Alaska
Cape Lutke is a landhead in Unimak Island, the largest island in the Aleutian Islands chain of the U.S. state of Alaska. It is located on the southern central coast of the island....
is a landhead on the island.

An interesting physical feature is Fisher Caldera, a volcanic crater
Volcanic crater
A volcanic crater is a circular depression in the ground caused by volcanic activity. It is typically a basin, circular in form within which occurs a vent from which magma erupts as gases, lava, and ejecta. A crater can be of large dimensions, and sometimes of great depth...
in the west-central part of Unimak. Some characteristics include many volcanic cone
Volcanic cone
Volcanic cones are among the simplest volcanic formations. They are built by ejecta from a volcanic vent, piling up around the vent in the shape of a cone with a central crater. Volcanic cones are of different types, depending upon the nature and size of the fragments ejected during the eruption...
s and undrained lake
Lake
A lake is a body of relatively still fresh or salt water of considerable size, localized in a basin, that is surrounded by land. Lakes are inland and not part of the ocean and therefore are distinct from lagoons, and are larger and deeper than ponds. Lakes can be contrasted with rivers or streams,...
s. It is named for Bernard Fisher, a U.S. Geological Survey geologist
Geologist
A geologist is a scientist who studies the solid and liquid matter that constitutes the Earth as well as the processes and history that has shaped it. Geologists usually engage in studying geology. Geologists, studying more of an applied science than a theoretical one, must approach Geology using...
who was killed in Umnak Pass
Umnak Pass
Umnak Pass is a strait between the Bering Sea and the North Pacific Ocean in the Aleutian Islands in Alaska. It lies between Unalaska Island to the northeast and Umnak Island to the southwest.-References:...
.

As a faunal extension
Fauna
Fauna or faunæ is all of the animal life of any particular region or time. The corresponding term for plants is flora.Zoologists and paleontologists use fauna to refer to a typical collection of animals found in a specific time or place, e.g. the "Sonoran Desert fauna" or the "Burgess shale fauna"...
of the Alaska Peninsula
Alaska Peninsula
The Alaska Peninsula is a peninsula extending about to the southwest from the mainland of Alaska and ending in the Aleutian Islands. The peninsula separates the Pacific Ocean from Bristol Bay, an arm of the Bering Sea....
, Unimak has a relatively diverse assemblage of terrestrial mammals, including brown bear
Brown Bear
The brown bear is a large bear distributed across much of northern Eurasia and North America. It can weigh from and its largest subspecies, the Kodiak Bear, rivals the polar bear as the largest member of the bear family and as the largest land-based predator.There are several recognized...
s and caribou. West of Unimak, the largest native mammal in the Aleutians is the red fox
Red Fox
The red fox is the largest of the true foxes, as well as being the most geographically spread member of the Carnivora, being distributed across the entire northern hemisphere from the Arctic Circle to North Africa, Central America, and the steppes of Asia...
.