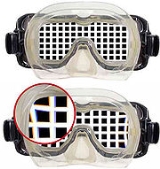 Encyclopedia
Light rays bend when they travel from one medium to another; the amount of bending is determined by the refractive indices
Refractive index
In optics the refractive index or index of refraction of a substance or medium is a measure of the speed of light in that medium. It is expressed as a ratio of the speed of light in vacuum relative to that in the considered medium....
of the two media. If one medium has a particular curved shape, it functions as a lens
Lens (optics)
A lens is an optical device with perfect or approximate axial symmetry which transmits and refracts light, converging or diverging the beam. A simple lens consists of a single optical element...
. The cornea
Cornea
The cornea is the transparent front part of the eye that covers the iris, pupil, and anterior chamber. Together with the lens, the cornea refracts light, with the cornea accounting for approximately two-thirds of the eye's total optical power. In humans, the refractive power of the cornea is...
, humours, and crystalline lens of the eye
Human eye
The human eye is an organ which reacts to light for several purposes. As a conscious sense organ, the eye allows vision. Rod and cone cells in the retina allow conscious light perception and vision including color differentiation and the perception of depth...
together form a lens that focuses images on the retina
Retina
The vertebrate retina is a light-sensitive tissue lining the inner surface of the eye. The optics of the eye create an image of the visual world on the retina, which serves much the same function as the film in a camera. Light striking the retina initiates a cascade of chemical and electrical...
. Our eyes are adapted for viewing in air. Water, however, has approximately the same refractive index as the cornea (both about 1.33), effectively eliminating the cornea's focusing properties. When our eyes are in water, instead of their focusing images on the retina, they now focus them far behind the retina, resulting in an extremely blurred image from hypermetropia.

The crystalline lenses of fishes'
Fish
Fish are a paraphyletic group of organisms that consist of all gill-bearing aquatic vertebrate animals that lack limbs with digits. Included in this definition are the living hagfish, lampreys, and cartilaginous and bony fish, as well as various extinct related groups...
eyes are extremely convex, almost spherical, and their refractive indices are the highest of all the animals. These properties enable proper focusing of the light rays and in turn proper image formation on the retina. This convex lens gives the name to the fisheye lens
Fisheye lens
In photography, a fisheye lens is a wide-angle lens that takes in a broad, panoramic and hemispherical image. Originally developed for use in meteorology to study cloud formation and called "whole-sky lenses", fisheye lenses quickly became popular in general photography for their unique, distorted...
in photography. 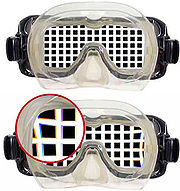 By wearing a flat diving mask
Diving mask
A diving mask is an item of diving equipment that allows scuba divers, free-divers, and snorkelers to see clearly underwater. When the human eye is in direct contact with water as opposed to air, its normal environment, light entering the eye is refracted by a different angle and the eye is unable...
, humans can see clearly under water. The scuba mask's flat window separates one's eyes from the surrounding water by a layer of air. Light rays entering from water into the flat parallel window change their direction minimally within the window material itself. But when these rays exit the window into the air space between the flat window and the eye, the refraction
Refraction
Refraction is the change in direction of a wave due to a change in its speed. It is essentially a surface phenomenon . The phenomenon is mainly in governance to the law of conservation of energy. The proper explanation would be that due to change of medium, the phase velocity of the wave is changed...
is quite noticeable. The view paths refract (bend) in a manner similar to viewing fish kept in an aquarium. Linear polarizing filters decrease visibility underwater by limiting ambient light and dimming artificial light sources.

While wearing a flat scuba mask or goggles
Goggles
Goggles or safety glasses are forms of protective eyewear that usually enclose or protect the area surrounding the eye in order to prevent particulates, water or chemicals from striking the eyes. They are used in chemistry laboratories and in woodworking. They are often used in snow sports as well,...
, objects underwater will appear 33% bigger (34% bigger in salt water) and 25% closer than they actually are. Also pincushion distortion and lateral chromatic aberration
Chromatic aberration
In optics, chromatic aberration is a type of distortion in which there is a failure of a lens to focus all colors to the same convergence point. It occurs because lenses have a different refractive index for different wavelengths of light...
are noticeable. Double-dome masks restore natural sized underwater vision and field of view, with certain limitations.

Water is responsible for the attenuation of light due to absorption. In other words, as we go deeper on a dive, more color is absorbed by the water. Color vision is also affected by turbidity of the water as well as particulate matter.

The best colors to use for visibility in water was shown by Luria et al. and quoted from Adolfson and Berghage below:

The most difficult colors at the limits of visibility with a water
background are dark colors such as gray or black.

A very short-sighted person (eyesight abnormality resulting from the eye's faulty refractive index due to which the distant objects appear blurred) can see more or less normally under water.

The Moken
Moken
The Moken , are an Austronesian ethnic group with about 2,000 to 3,000 members who maintain a nomadic, sea-based culture. They speak their own language which belongs to the Austronesian language family.-Nomenclature:They refer to themselves as Moken...
people of South-East Asia are able to focus underwater to pick up tiny shellfish and other food items http://www.cdnn.info/news/article/a040514.html. Gislén et al. have compared Moken and European children and found that the underwater visual acuity of the Moken was twice that of their European counterparts. This ability appears to be due to training rather than evolution
Evolution
Evolution is any change across successive generations in the heritable characteristics of biological populations. Evolutionary processes give rise to diversity at every level of biological organisation, including species, individual organisms and molecules such as DNA and proteins.Life on Earth...
or genetics.
This is due to the contraction of the pupil
Pupil
The pupil is a hole located in the center of the iris of the eye that allows light to enter the retina. It appears black because most of the light entering the pupil is absorbed by the tissues inside the eye. In humans the pupil is round, but other species, such as some cats, have slit pupils. In...
, instead of the usual dilation (mydriasis
Mydriasis
Mydriasis is a dilation of the pupil due to disease, trauma or the use of drugs. Normally, the pupil dilates in the dark and constricts in the light to respectively improve vividity at night and to protect the retina from sunlight damage during the day...
) that is undergone when a normal, untrained eye, accustomed to viewing in air, is submerged.
The source of this article is wikipedia, the free encyclopedia.  The text of this article is licensed under the GFDL.