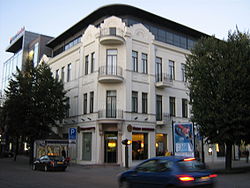 Ūkio Bankas is a Lithuania
Lithuania
Lithuania , officially the Republic of Lithuania is a country in Northern Europe, the biggest of the three Baltic states. It is situated along the southeastern shore of the Baltic Sea, whereby to the west lie Sweden and Denmark...
n commercial bank
Commercial bank
After the implementation of the Glass–Steagall Act, the U.S. Congress required that banks engage only in banking activities, whereas investment banks were limited to capital market activities. As the two no longer have to be under separate ownership under U.S...
based in Kaunas
Kaunas
Kaunas is the second-largest city in Lithuania and has historically been a leading centre of Lithuanian economic, academic, and cultural life. Kaunas was the biggest city and the center of a powiat in Trakai Voivodeship of the Grand Duchy of Lithuania since 1413. During Russian Empire occupation...
. More than 50% of shares are owned by Lithuanian businessman Vladimir Romanov
Vladimir Romanov
Vladimir Nikolayevich Romanov ; born 1947 in Tver Oblast, Russian SFSR, USSR) is an ethnic Russian businessman who also holds Lithuanian citizenship following that country's independence from the Soviet Union. He is chairman of UBIG Investments which is the majority shareholder in Scottish Premier...
who therefore is in the control of the bank. It is the fifth largest and oldest private bank in Lithuania. The bank is listed in NASDAQ OMX Vilnius stock exchange.

The bank is growing rapidly, since the beginning of 2005, Ūkio Bankas has opened 12 branches across Lithuania (correct as of 26 September 2006). Ūkio Bankas also has representative offices in Russia
Russia
Russia or , officially known as both Russia and the Russian Federation , is a country in northern Eurasia. It is a federal semi-presidential republic, comprising 83 federal subjects...
, Ukraine
Ukraine
Ukraine is a country in Eastern Europe. It has an area of 603,628 km², making it the second largest contiguous country on the European continent, after Russia...
and Kazakhstan
Kazakhstan
Kazakhstan , officially the Republic of Kazakhstan, is a transcontinental country in Central Asia and Eastern Europe. Ranked as the ninth largest country in the world, it is also the world's largest landlocked country; its territory of is greater than Western Europe...
, and Romanov is planning to open a branch of the bank in Edinburgh
Edinburgh
Edinburgh is the capital city of Scotland, the second largest city in Scotland, and the eighth most populous in the United Kingdom. The City of Edinburgh Council governs one of Scotland's 32 local government council areas. The council area includes urban Edinburgh and a rural area...
, Scotland
Scotland
Scotland is a country that is part of the United Kingdom. Occupying the northern third of the island of Great Britain, it shares a border with England to the south and is bounded by the North Sea to the east, the Atlantic Ocean to the north and west, and the North Channel and Irish Sea to the...
; the first branch to be located in Western Europe
Western Europe
Western Europe is a loose term for the collection of countries in the western most region of the European continents, though this definition is context-dependent and carries cultural and political connotations. One definition describes Western Europe as a geographic entity—the region lying in the...
.

In October 2006 during internet conference on the news portal Delfi.lt
Delfi.lt
Delfi is a major internet portal in the Baltic States of Estonia, Latvia, and Lithuania, providing daily news, ranging from gardening to politics...
Vladimir Romanov announced his plans of selling his shares to the strategic investor. GE Money, a branch of General Electric
General Electric
General Electric Company , or GE, is an American multinational conglomerate corporation incorporated in Schenectady, New York and headquartered in Fairfield, Connecticut, United States...
, as one of the possible buyers was mentioned by Romanov .