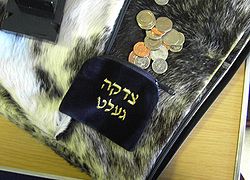 Tzedakah or Ṣ'daqah in Classical Hebrew  is a Hebrew
Hebrew language
Hebrew is a Semitic language of the Afroasiatic language family. Culturally, is it considered by Jews and other religious groups as the language of the Jewish people, though other Jewish languages had originated among diaspora Jews, and the Hebrew language is also used by non-Jewish groups, such...
word commonly translated as charity
Charity (practice)
The practice of charity means the voluntary giving of help to those in need who are not related to the giver.- Etymology :The word "charity" entered the English language through the Old French word "charité" which was derived from the Latin "caritas".Originally in Latin the word caritas meant...
, though it is based on the Hebrew word (צדק, tzadik
Tzadik
Tzadik/Zadik/Sadiq is a title given to personalities in Jewish tradition considered righteous, such as Biblical figures and later spiritual masters. The root of the word ṣadiq, is ṣ-d-q , which means "justice" or "righteousness", also the root of Tzedakah...
) meaning righteousness
Righteousness
Righteousness is an important theological concept in Zoroastrianism, Hinduism , Judaism, Christianity and Islam...
, fairness
Social justice
Social justice generally refers to the idea of creating a society or institution that is based on the principles of equality and solidarity, that understands and values human rights, and that recognizes the dignity of every human being. The term and modern concept of "social justice" was coined by...
or justice
Justice
Justice is a concept of moral rightness based on ethics, rationality, law, natural law, religion, or equity, along with the punishment of the breach of said ethics; justice is the act of being just and/or fair.-Concept of justice:...
. In Judaism
Judaism
Judaism ) is the "religion, philosophy, and way of life" of the Jewish people...
, tzedakah refers to the religious obligation to perform charity, and philanthropic acts, which Judaism emphasises are important parts of living a spiritual life; Maimonides
Maimonides
Moses ben-Maimon, called Maimonides and also known as Mūsā ibn Maymūn in Arabic, or Rambam , was a preeminent medieval Jewish philosopher and one of the greatest Torah scholars and physicians of the Middle Ages...
says that, while the second highest form of tzedakah is to anonymously give donations to unknown recipients, the highest form is to give a gift, loan, or partnership that will result in the recipient supporting himself instead of living upon others. Unlike philanthropy
Philanthropy
Philanthropy etymologically means "the love of humanity"—love in the sense of caring for, nourishing, developing, or enhancing; humanity in the sense of "what it is to be human," or "human potential." In modern practical terms, it is "private initiatives for public good, focusing on quality of...
, which is completely voluntary, tzedakah is seen as a religious obligation, which must be performed regardless of financial standing, and must even be performed by poor people; tzedakah is considered to be one of the three main acts that can annul a less than favorable heavenly decree.

The Hebrew Bible
Hebrew Bible
The Hebrew Bible is a term used by biblical scholars outside of Judaism to refer to the Tanakh , a canonical collection of Jewish texts, and the common textual antecedent of the several canonical editions of the Christian Old Testament...
teaches the obligation to aid those in need, but does not employ one single term for this obligation. The term tzedekah occurs 157 times in the Masoretic Text
Masoretic Text
The Masoretic Text is the authoritative Hebrew text of the Jewish Bible and is regarded as Judaism's official version of the Tanakh. While the Masoretic Text defines the books of the Jewish canon, it also defines the precise letter-text of these biblical books, with their vocalization and...
, typically in relation to "righteousness" per se, usually in the singular, but sometimes in the plural tzedekot, in relation to acts of charity. In the Septuagint this was sometimes translated eleemosyne, "almsgiving."


In rabbinical literature of the classical and Middle Ages

Maimonides
Maimonides
Moses ben-Maimon, called Maimonides and also known as Mūsā ibn Maymūn in Arabic, or Rambam , was a preeminent medieval Jewish philosopher and one of the greatest Torah scholars and physicians of the Middle Ages...
lists his Eight Levels of Giving, as written in the Mishneh Torah
Mishneh Torah
The Mishneh Torah subtitled Sefer Yad ha-Hazaka is a code of Jewish religious law authored by Maimonides , one of history's foremost rabbis...
, Hilkhot matanot aniyim ("Laws about Giving to Poor People"), Chapter 10:7-14:

In practice, most Jews carry out tzedakah by donating a portion of their income to charitable institutions, or to needy people that they may encounter; the perception among many modern day Jews is that if donation of this form is not possible, the obligation of tzedakah still requires that something be given. Traditional Jews commonly practice "ma'aser kesafim," tithing 10% of their income to support those in need.

Special acts of tzedakah are performed on significant days; at weddings, Jewish brides and bridegrooms would traditionally give to charity, to symbolise the sacred character of the marriage; at Passover
Passover
Passover is a Jewish holiday and festival. It commemorates the story of the Exodus, in which the ancient Israelites were freed from slavery in Egypt...
, a major holiday in Jewish tradition, it is traditional to be welcoming towards hungry strangers, and feed them at the table; at Purim
Purim
Purim is a Jewish holiday that commemorates the deliverance of the Jewish people in the ancient Persian Empire from destruction in the wake of a plot by Haman, a story recorded in the Biblical Book of Esther .Purim is celebrated annually according to the Hebrew calendar on the 14th...
it is considered obligatory for every Jew to give food to two other people
Mishloach manot
Mishloach manot , and also called a Purim basket, are gifts of food or drink that are sent to friends, relatives, neighbors, teachers, business associates, and any other acquaintances on Purim day. The mitzvah of giving mishloach manot derives from the Book of Esther...
, in an amount that would equate to a meal each, for the purpose of increasing the total happiness during the month
Adar
Adar is the sixth month of the civil year and the twelfth month of the ecclesiastical year on the Hebrew calendar. It is a winter month of 29 days...
.

As for the more limited form of tzedakah expressed in the biblical laws, namely the leaving of gleaning
Gleaning
Gleaning is the act of collecting leftover crops from farmers' fields after they have been commercially harvested or on fields where it is not economically profitable to harvest...
s from certain crops, the Shulchan Aruch
Shulchan Aruch
The Shulchan Aruch also known as the Code of Jewish Law, is the most authoritative legal code of Judaism. It was authored in Safed, Israel, by Yosef Karo in 1563 and published in Venice two years later...
argues that during the exile Jewish farmers are not obliged to obey it. Nevertheless, in modern Israel
Israel
The State of Israel is a parliamentary republic located in the Middle East, along the eastern shore of the Mediterranean Sea...
, rabbis of Orthodox Judaism insist that Jews allow gleanings to be consumed by the poor and by strangers, and all crops (not just gleanings) by anyone and everyone (free, not bought nor sold) during Sabbatical years.

In addition, one must be very careful about how one gives out tzedakah money. It is not sufficient to just give to anyone or any organization, rather, one must check the credentials and finances to be sure that your Tzedakah money will be used wisely, efficiently and effectively "Do not steal from a poor person, for (s)he is poor," (Proverbs
Book of Proverbs
The Book of Proverbs , commonly referred to simply as Proverbs, is a book of the Hebrew Bible.The original Hebrew title of the book of Proverbs is "Míshlê Shlomoh" . When translated into Greek and Latin, the title took on different forms. In the Greek Septuagint the title became "paroimai paroimiae"...
22:22) and from Talmud
Talmud
The Talmud is a central text of mainstream Judaism. It takes the form of a record of rabbinic discussions pertaining to Jewish law, ethics, philosophy, customs and history....
ic-era commentaries including Numbers Rabba 5:2. It is taught that Tzedakah money was never yours to begin with, rather, it always belongs to the recipient, and hence you have an obligation to give it AND to give it away to places that use it efficiently and effectively.

There are many examples of Tzedakah funds that operate according to Maimonides' principles above (particularly #2), including Hands on Tzedakah
Hands on tzedakah
Hands On Tzedakah is a 501 3 public charity headquartered in Boca Raton, Florida. Founded in 2003, the organization provides funding for various social service programs in the United States, Israel and other countries...
(working with non-profits in the USA and in Israel
Israel
The State of Israel is a parliamentary republic located in the Middle East, along the eastern shore of the Mediterranean Sea...
), and Mitzvah Heroes Fund (working mainly with non-profits in Israel). Paamonim
Paamonim
Paamonim is a non-profit organization operating in Israel aimed at assisting families in financial difficulty so that they may regain their economic independence...
is a non-profit organization in Israel that operates according to Maimonides' first principle.