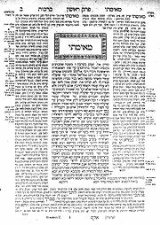 Overview
The Talmud is a central text of mainstream Judaism
Judaism
Judaism ) is the "religion, philosophy, and way of life" of the Jewish people...
. It takes the form of a record of rabbi
Rabbi
In Judaism, a rabbi is a teacher of Torah. This title derives from the Hebrew word רבי , meaning "My Master" , which is the way a student would address a master of Torah...
nic discussions pertaining to Jewish law
Halakha
Halakha — also transliterated Halocho , or Halacha — is the collective body of Jewish law, including biblical law and later talmudic and rabbinic law, as well as customs and traditions.Judaism classically draws no distinction in its laws between religious and ostensibly non-religious life; Jewish...
, ethics
Jewish ethics
Jewish ethics stands at the intersection of Judaism and the Western philosophical tradition of ethics. Like other types of religious ethics, the diverse literature of Jewish ethics primarily aims to answer a broad range of moral questions and, hence, may be classified as a normative ethics...
, philosophy, customs and history.

The Talmud has two components: the Mishnah
Mishnah
The Mishnah or Mishna is the first major written redaction of the Jewish oral traditions called the "Oral Torah". It is also the first major work of Rabbinic Judaism. It was redacted c...
(c. 200 CE
Common Era
Common Era ,abbreviated as CE, is an alternative designation for the calendar era originally introduced by Dionysius Exiguus in the 6th century, traditionally identified with Anno Domini .Dates before the year 1 CE are indicated by the usage of BCE, short for Before the Common Era Common Era...
), the first written compendium of Judaism's Oral Law; and the Gemara
Gemara
The Gemara is the component of the Talmud comprising rabbinical analysis of and commentary on the Mishnah. After the Mishnah was published by Rabbi Judah the Prince The Gemara (also transliterated Gemora or, less commonly, Gemorra; from Aramaic גמרא gamar; literally, "[to] study" or "learning by...
(c. 500 CE), a discussion of the Mishnah and related Tannaitic
Tannaim
The Tannaim were the Rabbinic sages whose views are recorded in the Mishnah, from approximately 70-200 CE. The period of the Tannaim, also referred to as the Mishnaic period, lasted about 130 years...
writings that often ventures onto other subjects and expounds broadly on the Tanakh
Tanakh
The Tanakh is a name used in Judaism for the canon of the Hebrew Bible. The Tanakh is also known as the Masoretic Text or the Miqra. The name is an acronym formed from the initial Hebrew letters of the Masoretic Text's three traditional subdivisions: The Torah , Nevi'im and Ketuvim —hence...
.

The terms Talmud and Gemara are often used interchangeably.

Make a teacher for yourself, acquire for yourself a friend, and judge every man to the side of merit. (Avot 1:6)

Let your home be a meeting place for the wise; dust yourself in the soil of their feet, and drink thirstily of their words. (Avot 1:4)

Rabbi Eliezer would say: The honor of your fellow should be as precious to you as your own, and do not be easy to anger. (Avot 2:7)

Rabbi Joshua would say: An evil eye, the evil inclination, and the hatred of one's fellows, drive a person from the world. (Avot 2:11)