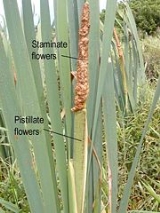 Encyclopedia
Typha latifolia is a perennial
Perennial plant
A perennial plant or simply perennial is a plant that lives for more than two years. The term is often used to differentiate a plant from shorter lived annuals and biennials. The term is sometimes misused by commercial gardeners or horticulturalists to describe only herbaceous perennials...
herbaceous
Herbaceous
A herbaceous plant is a plant that has leaves and stems that die down at the end of the growing season to the soil level. They have no persistent woody stem above ground...
plant in the genus
Genus
In biology, a genus is a low-level taxonomic rank used in the biological classification of living and fossil organisms, which is an example of definition by genus and differentia...
Typha
Typha
Typha is a genus of about eleven species of monocotyledonous flowering plants in the family Typhaceae. The genus has a largely Northern Hemisphere distribution, but is essentially cosmopolitan, being found in a variety of wetland habitats...
. It is found as a native plant
Native plant
Native plant is a term to describe plants endemic or naturalized to a given area in geologic time.This includes plants that have developed, occur naturally, or existed for many years in an area...
species in North and South America, Europe, Eurasia
Eurasia
Eurasia is a continent or supercontinent comprising the traditional continents of Europe and Asia ; covering about 52,990,000 km2 or about 10.6% of the Earth's surface located primarily in the eastern and northern hemispheres...
, and Africa. In Canada, broadleaf cattail occurs in all provinces and the Northwest Territories, and in the United States, it is native to all states except Hawaii. It is an introduced
Introduced species
An introduced species — or neozoon, alien, exotic, non-indigenous, or non-native species, or simply an introduction, is a species living outside its indigenous or native distributional range, and has arrived in an ecosystem or plant community by human activity, either deliberate or accidental...
and invasive species
Invasive species
"Invasive species", or invasive exotics, is a nomenclature term and categorization phrase used for flora and fauna, and for specific restoration-preservation processes in native habitats, with several definitions....
, and considered a noxious weed, in Australia
Australia
Australia , officially the Commonwealth of Australia, is a country in the Southern Hemisphere comprising the mainland of the Australian continent, the island of Tasmania, and numerous smaller islands in the Indian and Pacific Oceans. It is the world's sixth-largest country by total area...
and Hawaii
Hawaii
Hawaii is the newest of the 50 U.S. states , and is the only U.S. state made up entirely of islands. It is the northernmost island group in Polynesia, occupying most of an archipelago in the central Pacific Ocean, southwest of the continental United States, southeast of Japan, and northeast of...
. It is not native but has been reported in Indonesia, Malaysia, New Zealand, Papua New Guinea, and the Philippines.

T. latifolia has been found in a variety of climates, including tropical, subtropical, southern and northern temperate, humid coastal, and dry continental. It is found at elevations from sea level to 7,500 feet (2,300 m).

T. latifolia is an "obligate wetland" species, meaning that it is always found in or near water. The species generally grows in flooded areas where the water depth does not exceed 2.6 feet (0.8 meters). However, it has also been reported growing in floating mats in slightly deeper water. T. latifolia grows mostly in fresh water but also occurs in slightly brackish marshes. The species can displace other species native to salt marshes upon reduction in salinity. Under such conditions the plant may be considered invasive, since it interferes with preservation of the salt marsh habitat.

Traditionally, Typha latifolia has been a part of many native North American cultures, as a source of food, medicine, and for other uses. The rhizome
Rhizome
In botany and dendrology, a rhizome is a characteristically horizontal stem of a plant that is usually found underground, often sending out roots and shoots from its nodes...
s are edible after cooking
Cooking
Cooking is the process of preparing food by use of heat. Cooking techniques and ingredients vary widely across the world, reflecting unique environmental, economic, and cultural traditions. Cooks themselves also vary widely in skill and training...
and removing the skin, while peeled stems and leaf bases can be eaten raw, or cooked. Young flower
Flower
A flower, sometimes known as a bloom or blossom, is the reproductive structure found in flowering plants . The biological function of a flower is to effect reproduction, usually by providing a mechanism for the union of sperm with eggs...
spikes are edible as well. Some cultures make use of the roots of T. latifolia as a poultice
Poultice
A poultice, also called cataplasm, is a soft moist mass, often heated and medicated, that is spread on cloth over the skin to treat an aching, inflamed, or painful part of the body. It can be used on wounds such as cuts...
for boil
Boil
A boil, also called a furuncle, is a deep folliculitis, infection of the hair follicle. It is always caused by infection by the bacterium Staphylococcus aureus, resulting in a painful swollen area on the skin caused by an accumulation of pus and dead tissue...
s, burns, or wounds. The Hopi
Hopi
The Hopi are a federally recognized tribe of indigenous Native American people, who primarily live on the Hopi Reservation in northeastern Arizona. The Hopi area according to the 2000 census has a population of 6,946 people. Their Hopi language is one of the 30 of the Uto-Aztecan language...
Kachina
Kachina
A kachina is a spirit being in western Pueblo cosmology and religious practices. The western Pueblo, Native American cultures located in the southwestern United States, include Hopi, Zuni, Tewa Village , Acoma Pueblo, and Laguna Pueblo. The kachina cult has spread to more eastern Pueblos, e.g....
s give the plant to children with toys attached, such as bows and dolls during the Home Dance.

While Typha latifolia grows all over, including in rural areas, it is not advisable to eat specimens deriving from polluted water
Water pollution
Water pollution is the contamination of water bodies . Water pollution occurs when pollutants are discharged directly or indirectly into water bodies without adequate treatment to remove harmful compounds....
as it is used as a bioremediator, it absorbs pollutants. Do not eat them if they taste very bitter or spicy.