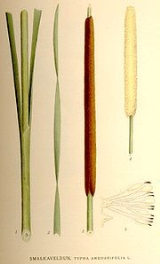 Encyclopedia
Typha angustifolia L., ( also Lesser Bulrush or Narrowleaf Cattail or Lesser Reedmace), is a perennial
Perennial plant
A perennial plant or simply perennial is a plant that lives for more than two years. The term is often used to differentiate a plant from shorter lived annuals and biennials. The term is sometimes misused by commercial gardeners or horticulturalists to describe only herbaceous perennials...
herbaceous
Herbaceous
A herbaceous plant is a plant that has leaves and stems that die down at the end of the growing season to the soil level. They have no persistent woody stem above ground...
plant of genus
Genus
In biology, a genus is a low-level taxonomic rank used in the biological classification of living and fossil organisms, which is an example of definition by genus and differentia...
Typha
Typha
Typha is a genus of about eleven species of monocotyledonous flowering plants in the family Typhaceae. The genus has a largely Northern Hemisphere distribution, but is essentially cosmopolitan, being found in a variety of wetland habitats...
. This cattail is an "obligate wetland" species that is commonly found in the northern hemisphere in brackish locations. The plant's leaves are flat, very narrow (¼"-½" wide), and 3'-6' tall when mature; 12-16 leaves arise from each vegetative shoot. At maturity, they have distinctive stalks that are about as tall as the leaves; the stalks are topped with brown, fluffy, sausage-shaped flowering heads. The plants have sturdy, rhizomatous roots that can extend 27" and are typically ¾"-1½" in diameter.

It has been proposed that the species was introduced from Europe to North America. In North America, it is also thought to have been introduced from coastal to inland locations.
The geographic range of Typha angustifolia overlaps with the very similar species Typha latifolia
Typha latifolia
Typha latifolia is a perennial herbaceous plant in the genus Typha. It is found as a native plant species in North and South America, Europe, Eurasia, and Africa...
(broadleaf or common cattail). T. angustifolia can be distinguished from T. latifolia by its narrower leaves and by a clear separation of two different regions (staminate flowers above and pistilate flowers below) on the flowering heads. The species hybridize as Typha x glauca (Typha angustifolia x T. latifolia) (white cattail); Typha x glauca is not a distinct species, but is rather a sterile F1 hybrid
F1 hybrid
F1 hybrid is a term used in genetics and selective breeding. F1 stands for Filial 1, the first filial generation seeds/plants or animal offspring resulting from a cross mating of distinctly different parental types....
. Broadleaf cattail is usually found in shallower water than narrowleaf cattail.

Several parts of the plant are edible, including during various seasons the dormant sprouts on roots and bases of leaves, the inner core of the stalk, green bloom spikes, ripe pollen, and starchy roots. The edible stem is called bồn bồn in Vietnam.photo
The source of this article is wikipedia, the free encyclopedia.  The text of this article is licensed under the GFDL.