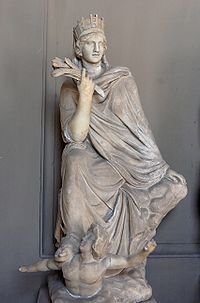 In ancient Greek city cults
Ancient Greek religion
Greek religion encompasses the collection of beliefs and rituals practiced in ancient Greece in the form of both popular public religion and cult practices. These different groups varied enough for it to be possible to speak of Greek religions or "cults" in the plural, though most of them shared...
, Tyche (Τύχη, meaning "luck" in Greek
Greek language
Greek is an independent branch of the Indo-European family of languages. Native to the southern Balkans, it has the longest documented history of any Indo-European language, spanning 34 centuries of written records. Its writing system has been the Greek alphabet for the majority of its history;...
, Roman
Roman mythology
Roman mythology is the body of traditional stories pertaining to ancient Rome's legendary origins and religious system, as represented in the literature and visual arts of the Romans...
equivalent: Fortuna
Fortuna
Fortuna can mean:*Fortuna, the Roman goddess of luck -Geographical:*19 Fortuna, asteroid*Fortuna, California, town located on the north coast of California*Fortuna, United States Virgin Islands...
) was the presiding tutelary deity that governed the fortune and prosperity of a city, its destiny
Destiny
Destiny or fate refers to a predetermined course of events. It may be conceived as a predetermined future, whether in general or of an individual...
.

Increasingly during the Hellenistic period, cities venerated their own specific iconic version of Tyche, wearing a mural crown
Mural crown
-Usage in ancient times:In Hellenistic culture, a mural crown identified the goddess Tyche, the embodiment of the fortune of a city, familiar to Romans as Fortuna...
(a crown like the walls of the city).

The Greek historian Polybius
Polybius
Polybius , Greek ) was a Greek historian of the Hellenistic Period noted for his work, The Histories, which covered the period of 220–146 BC in detail. The work describes in part the rise of the Roman Republic and its gradual domination over Greece...
believed that when no cause can be discovered to events such as floods, drought or frosts then the cause of these events may be fairly attributed to Tyche.

Stylianos Spyridakis concisely expressed Tyche's appeal in a Hellenistic world of arbitrary violence and unmeaning reverses: "In the turbulent years of the Epigoni of Alexander
Diadochi
The Diadochi were the rival generals, family and friends of Alexander the Great who fought for the control of Alexander's empire after his death in 323 BC...
, an awareness of the instability of human affairs led people to believe that Tyche, the blind mistress of Fortune, governed mankind with an inconstancy which explained the vicissitudes of the time."

In literature, she might be given various genealogies, as a daughter of Hermes
Hermes
Hermes is the great messenger of the gods in Greek mythology and a guide to the Underworld. Hermes was born on Mount Kyllini in Arcadia. An Olympian god, he is also the patron of boundaries and of the travelers who cross them, of shepherds and cowherds, of the cunning of thieves, of orators and...
and Aphrodite
Aphrodite
Aphrodite is the Greek goddess of love, beauty, pleasure, and procreation.Her Roman equivalent is the goddess .Historically, her cult in Greece was imported from, or influenced by, the cult of Astarte in Phoenicia....
, or considered as one of the Oceanids, daughters of Oceanus
Oceanus
Oceanus ; , Ōkeanós) was a pseudo-geographical feature in classical antiquity, believed by the ancient Greeks and Romans to be the world-ocean, an enormous river encircling the world....
and Tethys
Tethys (mythology)
In Greek mythology, Tethys , daughter of Uranus and Gaia was an archaic Titaness and aquatic sea goddess, invoked in classical Greek poetry but not venerated in cult. Tethys was both sister and wife of Oceanus...
, or of Zeus
Zeus
In the ancient Greek religion, Zeus was the "Father of Gods and men" who ruled the Olympians of Mount Olympus as a father ruled the family. He was the god of sky and thunder in Greek mythology. His Roman counterpart is Jupiter and his Etruscan counterpart is Tinia.Zeus was the child of Cronus...
. She was connected with Nemesis
Nemesis (mythology)
In Greek mythology, Nemesis , also called Rhamnousia/Rhamnusia at her sanctuary at Rhamnous, north of Marathon, was the spirit of divine retribution against those who succumb to hubris . The Greeks personified vengeful fate as a remorseless goddess: the goddess of revenge...
and Agathos Daimon
Agathodaemon
In ancient Greek religion, Agathos Daimon or Agathodaemon was a daemon or presiding spirit of the vineyards and grainfields and a personal companion spirit, similar to the Roman genius, ensuring good luck, health, and wisdom....
("good spirit").

In classical music, she is bemoaned in the "O Fortuna
O Fortuna
"O Fortuna" is a medieval Latin Goliardic poem written early in the thirteenth century, part of the collection known as the Carmina Burana. It is a complaint about fate, and Fortuna, a goddess in Roman mythology and personification of luck....
" movement of Carl Orff
Carl Orff
Carl Orff was a 20th-century German composer, best known for his cantata Carmina Burana . In addition to his career as a composer, Orff developed an influential method of music education for children.-Early life:...
's Carmina Burana
Carmina Burana
Carmina Burana , Latin for "Songs from Beuern" , is the name given to a manuscript of 254 poems and dramatic texts mostly from the 11th or 12th century, although some are from the 13th century. The pieces were written principally in Medieval Latin; a few in Middle High German, and some with traces...
.

She was uniquely venerated at Itanos
Itanos
Itanos is a former municipality in the Lasithi peripheral unit, eastern Crete, Greece. Since the 2011 local government reform it is part of the municipality Siteia, of which it is a municipal unit. Its territory is rich in ancient archaeological sites, notably a Minoan city in Roussolakkos and the...
in Crete, as Tyche Protogeneia, linked with the Athenian Protogeneia
Protogeneia
Protogeneia , in Greek mythology, may refer to:*Protogeneia, a daughter of Deucalion and Pyrrha, progenitors in Greek mythology. She was married to Locrus, but had no children; Zeus, however, who carried her off, became by her, on mount Maenalus in Arcadia, the father of Opus, Aethlius and Aetolus...
("firstborn"), daughter of Erechtheus
Erechtheus
Erechtheus in Greek mythology was the name of an archaic king of Athens, the re-founder of the polis and a double at Athens for Poseidon, as "Poseidon Erechtheus"...
, whose self-sacrifice saved the city.

Tyche appears on many coins
Numismatics
Numismatics is the study or collection of currency, including coins, tokens, paper money, and related objects. While numismatists are often characterized as students or collectors of coins, the discipline also includes the broader study of money and other payment media used to resolve debts and the...
of the Hellenistic period in the three centuries before the Christian era, especially from cities in the Aegean. Unpredictable turns of fortune drive the complicated plotlines of Hellenistic Romances
Romance (genre)
As a literary genre of high culture, romance or chivalric romance is a style of heroic prose and verse narrative that was popular in the aristocratic circles of High Medieval and Early Modern Europe. They were fantastic stories about marvel-filled adventures, often of a knight errant portrayed as...
, such as Leucippe and Clitophon
Leucippe and Clitophon
The Adventures of Leucippe and Clitophon , written by Achilles Tatius, is one of the five surviving Ancient Greek romances, notable for its many similarities to Longus' Daphnis and Chloe, and its apparent mild parodic nature.-Plot summary:...
or Daphnis and Chloe
Daphnis and Chloe
Daphnis and Chloe is the only known work of the 2nd century AD Greek novelist and romancer Longus.-Setting and style:It is set on the isle of Lesbos during the 2nd century AD, which is also assumed to be the author's home. Its style is rhetorical and pastoral; its shepherds and shepherdesses are...
. She experienced a resurgence in another era of uneasy change, the final days of publicly-sanctioned Paganism
Paganism
Paganism is a blanket term, typically used to refer to non-Abrahamic, indigenous polytheistic religious traditions....
, between the late-fourth-century emperors Julian
Julian the Apostate
Julian "the Apostate" , commonly known as Julian, or also Julian the Philosopher, was Roman Emperor from 361 to 363 and a noted philosopher and Greek writer....
and Theodosius I
Theodosius I
Theodosius I , also known as Theodosius the Great, was Roman Emperor from 379 to 395. Theodosius was the last emperor to rule over both the eastern and the western halves of the Roman Empire. During his reign, the Goths secured control of Illyricum after the Gothic War, establishing their homeland...
who definitively closed the temples. The effectiveness of her capricious power even achieved respectability in philosophical circles during that generation, though among poets it was a commonplace to revile her for a fickle harlot.

In medieval art
Medieval art
The medieval art of the Western world covers a vast scope of time and place, over 1000 years of art history in Europe, and at times the Middle East and North Africa...
, she was depicted as carrying a cornucopia
Cornucopia
The cornucopia or horn of plenty is a symbol of abundance and nourishment, commonly a large horn-shaped container overflowing with produce, flowers, nuts, other edibles, or wealth in some form...
, an emblem
Emblem
An emblem is a pictorial image, abstract or representational, that epitomizes a concept — e.g., a moral truth, or an allegory — or that represents a person, such as a king or saint.-Distinction: emblem and symbol:...
atic ship's rudder, and the wheel of fortune
Fortuna (mythology)
Fortuna was the goddess of fortune and personification of luck in Roman religion. She might bring good luck or bad: she could be represented as veiled and blind, as in modern depictions of Justice, and came to represent life's capriciousness...
, or she may stand on the wheel, presiding over the entire circle of fate.

The constellation of Virgo
Virgo (constellation)
Virgo is one of the constellations of the zodiac. Its name is Latin for virgin, and its symbol is . Lying between Leo to the west and Libra to the east, it is the second largest constellation in the sky...
is sometimes identified as the heavenly figure of Tyche, as well as other goddesses such as Demeter
Demeter
In Greek mythology, Demeter is the goddess of the harvest, who presided over grains, the fertility of the earth, and the seasons . Her common surnames are Sito as the giver of food or corn/grain and Thesmophoros as a mark of the civilized existence of agricultural society...
and Astraea.

The tutelary goddess who had ancient Rome
Ancient Rome
Ancient Rome was a thriving civilization that grew on the Italian Peninsula as early as the 8th century BC. Located along the Mediterranean Sea and centered on the city of Rome, it expanded to one of the largest empires in the ancient world....
in her care was Roma
Roma (mythology)
In traditional Roman religion, Roma was a female deity who personifed the city of Rome and more broadly, the Roman state. Her image appears on the base of the column of Antoninus Pius.-Problems in earliest attestation:...
. Constantine, in founding Constantinople
Constantinople
Constantinople was the capital of the Roman, Eastern Roman, Byzantine, Latin, and Ottoman Empires. Throughout most of the Middle Ages, Constantinople was Europe's largest and wealthiest city.-Names:...
, entrusted the new city to Anthousa.

In the Greco-Buddhist art of Gandhara
Gandhara
Gandhāra , is the name of an ancient kingdom , located in northern Pakistan and eastern Afghanistan. Gandhara was located mainly in the vale of Peshawar, the Potohar plateau and on the Kabul River...
, Tyche became closely associated with the Buddhist goddess Hariti
Hariti
Hārītī , is a Gandharan ogeress and Bactrian mythological figure who was later transformed in to a symbol for the protection of children, easy delivery, happy child rearing and parenting, harmony between husband and wife, love, and the well-being and safety of the family...
.
The source of this article is wikipedia, the free encyclopedia.  The text of this article is licensed under the GFDL.