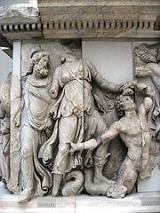 Overview
Oceanus; , Ōkeanós, ɔːkeanós) was a pseudo-geographical feature in classical antiquity
Classical antiquity
Classical antiquity is a broad term for a long period of cultural history centered on the Mediterranean Sea, comprising the interlocking civilizations of ancient Greece and ancient Rome, collectively known as the Greco-Roman world...
, believed by the ancient Greeks
Ancient Greece
Ancient Greece is a civilization belonging to a period of Greek history that lasted from the Archaic period of the 8th to 6th centuries BC to the end of antiquity. Immediately following this period was the beginning of the Early Middle Ages and the Byzantine era. Included in Ancient Greece is the...
and Romans
Ancient Rome
Ancient Rome was a thriving civilization that grew on the Italian Peninsula as early as the 8th century BC. Located along the Mediterranean Sea and centered on the city of Rome, it expanded to one of the largest empires in the ancient world....
to be the world-ocean
World Ocean
The World Ocean, world ocean, or global ocean, is the interconnected system of the Earth's oceanic waters, and comprises the bulk of the hydrosphere, covering almost 71% of the Earth's surface, with a total volume of 1.332 billion cubic kilometres.The unity and continuity of the World Ocean, with...
, an enormous river
River
A river is a natural watercourse, usually freshwater, flowing towards an ocean, a lake, a sea, or another river. In a few cases, a river simply flows into the ground or dries up completely before reaching another body of water. Small rivers may also be called by several other names, including...
encircling the world.

Strictly speaking, Oceanus was the ocean
Ocean
An ocean is a major body of saline water, and a principal component of the hydrosphere. Approximately 71% of the Earth's surface is covered by ocean, a continuous body of water that is customarily divided into several principal oceans and smaller seas.More than half of this area is over 3,000...
-stream
Stream
A stream is a body of water with a current, confined within a bed and stream banks. Depending on its locale or certain characteristics, a stream may be referred to as a branch, brook, beck, burn, creek, "crick", gill , kill, lick, rill, river, syke, bayou, rivulet, streamage, wash, run or...
at the Equator
Equator
An equator is the intersection of a sphere's surface with the plane perpendicular to the sphere's axis of rotation and containing the sphere's center of mass....
in which floated the habitable hemisphere (οἰκουμένη, oikoumene). In Greek mythology
Greek mythology
Greek mythology is the body of myths and legends belonging to the ancient Greeks, concerning their gods and heroes, the nature of the world, and the origins and significance of their own cult and ritual practices. They were a part of religion in ancient Greece...
, this world-ocean was personified as a Titan
Titan (mythology)
In Greek mythology, the Titans were a race of powerful deities, descendants of Gaia and Uranus, that ruled during the legendary Golden Age....
, a son of Uranus
Uranus (mythology)
Uranus , was the primal Greek god personifying the sky. His equivalent in Roman mythology was Caelus. In Ancient Greek literature, according to Hesiod in his Theogony, Uranus or Father Sky was the son and husband of Gaia, Mother Earth...
and Gaia
Gaia (mythology)
Gaia was the primordial Earth-goddess in ancient Greek religion. Gaia was the great mother of all: the heavenly gods and Titans were descended from her union with Uranus , the sea-gods from her union with Pontus , the Giants from her mating with Tartarus and mortal creatures were sprung or born...
. In Hellenistic and Roman mosaics, this Titan was often depicted as having the upper body of a muscular man with a long beard and horns (often represented as the claws of a crab) and the lower body of a serpent
Serpent (symbolism)
Serpent in Latin means: Rory Collins :&, in turn, from the Biblical Hebrew word of: "saraf" with root letters of: which refers to something burning-as, the pain of poisonous snake's bite was likened to internal burning.This word is commonly used in a specifically mythic or religious context,...
(cf.

Is it true he has a son but not full titan.

Who is Ouranos father and mother
More
x