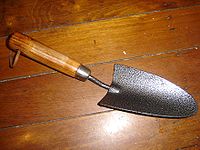 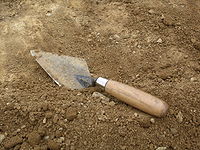 A trowel is one of several similar hand tool
Hand tool
A hand tool is a device for performing work on a material or a physical system using only hands. The hand tools can be manually used employing force, or electrically powered, using electrical current...
s used for digging, smoothing, or otherwise moving around small amounts of viscous or particulate material.

In gardening
Gardening
Gardening is the practice of growing and cultivating plants. Ornamental plants are normally grown for their flowers, foliage, or overall appearance; useful plants are grown for consumption , for their dyes, or for medicinal or cosmetic use...
, a trowel is a tool with a pointed, scoop-shaped metal blade
Blade
A blade is that portion of a tool, weapon, or machine with a cutting edge and/or a pointed tip that is designed to cut and/or puncture, stab, slash, chop, slice, thrust, or scrape animate or inanimate surfaces or materials...
and a handle. It is used for breaking up earth, digging small holes, especially for planting and weeding, mixing in fertilizer
Fertilizer
Fertilizer is any organic or inorganic material of natural or synthetic origin that is added to a soil to supply one or more plant nutrients essential to the growth of plants. A recent assessment found that about 40 to 60% of crop yields are attributable to commercial fertilizer use...
or other additives, and transferring plants to pots.

A cathole trowel is similar to a gardening trowel, but it was specifically designed for digging cathole
Cathole
A cathole or cat hole is a pit for human feces. Catholes are frequently used for the purpose of disposing of bowel movements or waste water by hikers and others engaging in outdoor recreation....
s in the backcountry
Backcountry
A backcountry area in general terms is a geographical region that is:* isolated* remote* undeveloped* difficult to accessThe term may apply to various regions that are reasonably close to urban areas but are:* not immediately accessible by car...
. Cathole trowels are used by backpackers
Backpacking (wilderness)
Backpacking combines the activities of hiking and camping for an overnight stay in backcountry wilderness...
, hikers and some kinds of campers, so they are often made of lighter weight materials than gardening trowels to make them easier to carry. Also, they may have features such as ruled
Ruler
A ruler, sometimes called a rule or line gauge, is an instrument used in geometry, technical drawing, printing and engineering/building to measure distances and/or to rule straight lines...
sides to measure for proper cathole depth or jagged edges for cutting through roots or frozen soil. Some cathole trowels are also designed to fold-up or collapse into a smaller size for easier storage.

A bricklayer's trowel (also known as a pointing trowel) is a tool with a handle and flat metal blade, used by masons for leveling, spreading, or shaping substances such as cement
Cement
In the most general sense of the word, a cement is a binder, a substance that sets and hardens independently, and can bind other materials together. The word "cement" traces to the Romans, who used the term opus caementicium to describe masonry resembling modern concrete that was made from crushed...
, plaster
Plaster
Plaster is a building material used for coating walls and ceilings. Plaster starts as a dry powder similar to mortar or cement and like those materials it is mixed with water to form a paste which liberates heat and then hardens. Unlike mortar and cement, plaster remains quite soft after setting,...
, or mortar
Mortar (masonry)
Mortar is a workable paste used to bind construction blocks together and fill the gaps between them. The blocks may be stone, brick, cinder blocks, etc. Mortar becomes hard when it sets, resulting in a rigid aggregate structure. Modern mortars are typically made from a mixture of sand, a binder...
, as well as for breaking brick
Brick
A brick is a block of ceramic material used in masonry construction, usually laid using various kinds of mortar. It has been regarded as one of the longest lasting and strongest building materials used throughout history.-History:...
s to shape them or smoothing a mould. A tuck pointing trowel is longer and thinner, designed for packing mortar between bricks. Brick trowels are traditionally made of carbon steel, but some newer versions are made of cast stainless steel
Stainless steel
In metallurgy, stainless steel, also known as inox steel or inox from French "inoxydable", is defined as a steel alloy with a minimum of 10.5 or 11% chromium content by mass....
, which has longer wear and is rust-free.

In archaeology
Archaeology
Archaeology, or archeology , is the study of human society, primarily through the recovery and analysis of the material culture and environmental data that they have left behind, which includes artifacts, architecture, biofacts and cultural landscapes...
brick or pointing trowels (usually 4" or 5" steel trowels) are used to scratch the strata in an excavation and allow the colours of the soil to be clear, so that the different strata can be identified, processed and excavated. In the United States
United States
The United States of America is a federal constitutional republic comprising fifty states and a federal district...
, there are several preferred brands of pointing trowels Marshalltown being one, but in the British Isles
British Isles
The British Isles are a group of islands off the northwest coast of continental Europe that include the islands of Great Britain and Ireland and over six thousand smaller isles. There are two sovereign states located on the islands: the United Kingdom of Great Britain and Northern Ireland and...
the WHS 4" pointing trowel
William Hunt and Sons
William Hunt and Sons or WHS is a British brand of masonry tools.Originally, William Hunt was a tool manufacturing firm from Sheffield in England. In 1857 they were working from Brades Steel Works, near Birmingham...
is the traditional tool.

Several types of trowel are used in concrete
Concrete
Concrete is a composite construction material, composed of cement and other cementitious materials such as fly ash and slag cement, aggregate , water and chemical admixtures.The word concrete comes from the Latin word...
construction. The float trowel or finishing trowel is usually rectangular, used to smooth, level, or texture the top layer of hardening concrete. A flooring trowel has one rectangular end and one pointed end, made to fit corners.

A gauging trowel has a rounded tip, used to mix measured proportions of the ingredients for quick set plaster
Plaster
Plaster is a building material used for coating walls and ceilings. Plaster starts as a dry powder similar to mortar or cement and like those materials it is mixed with water to form a paste which liberates heat and then hardens. Unlike mortar and cement, plaster remains quite soft after setting,...
.

A pool trowel is a flat-bladed tool with rounded ends used to apply coatings to concrete
Concrete
Concrete is a composite construction material, composed of cement and other cementitious materials such as fly ash and slag cement, aggregate , water and chemical admixtures.The word concrete comes from the Latin word...
, especially on swimming pool
Swimming pool
A swimming pool, swimming bath, wading pool, or simply a pool, is a container filled with water intended for swimming or water-based recreation. There are many standard sizes; the largest is the Olympic-size swimming pool...
decks.

Margin trowels and notched trowels are used to apply adhesive and grout
Grout
Grout is a construction material used to embed rebars in masonry walls, connect sections of pre-cast concrete, fill voids, and seal joints . Grout is generally composed of a mixture of water, cement, sand, often color tint, and sometimes fine gravel...
when applying ceramic or stone tile
Tile
A tile is a manufactured piece of hard-wearing material such as ceramic, stone, metal, or even glass. Tiles are generally used for covering roofs, floors, walls, showers, or other objects such as tabletops...
to a surface.

A smaller but similarly shaped tool called the palette knife
Palette knife
A palette knife is a blunt tool used for mixing or applying paint, with a flexible steel blade. It is primarily used for mixing paint colors, paste, etc., or for marbling, decorative endpapers, etc...
is used in oil painting
Oil painting
Oil painting is the process of painting with pigments that are bound with a medium of drying oil—especially in early modern Europe, linseed oil. Often an oil such as linseed was boiled with a resin such as pine resin or even frankincense; these were called 'varnishes' and were prized for their body...
.