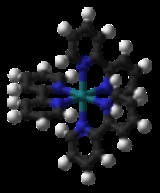 Encyclopedia
Trisruthenium(II) dichloride is the coordination compound with the formula [Ru(bipy)3]Cl2. This red crystalline salt is obtained as the hexahydrate
Water of crystallization
In crystallography, water of crystallization or water of hydration or crystallization water is water that occurs in crystals. Water of crystallization is necessary for the maintenance of crystalline properties, but capable of being removed by sufficient heat...
, although all of the properties of interest are in the cation [Ru(bipy)3]2+, which has received much attention because of its distinctive optical properties. The chlorides can be replaced with other anions, such as PF6−
Hexafluorophosphate
Hexafluorophosphate is an anion with chemical formula of . This octahedral species is isoelectronic with sulfur hexafluoride, SF6, and is valence isoelectronic with the highly stable superacid anion fluoroantimonate . As a non-coordinating anion, it is a poor nucleophile...
.

This salt is prepared by treating an aqueous solution of ruthenium trichloride with 2,2'-bipyridine
2,2'-Bipyridine
2,2'-Bipyridine is a organic compound with the formula . This colorless solid, commonly abbreviated bipy or bpy , is an important isomer of the bipyridine family. It is a bidentate chelating ligand, forming complexes with many transition metals...
. In this conversion, Ru(III) is reduced to Ru(II), and hypophosphorous acid
Hypophosphorous acid
Hypophosphorous acid is a phosphorus oxoacid and a powerful reducing agent with molecular formula H3PO2. Inorganic chemists refer to the free acid by this name , or the acceptable name of phosphinic acid. It is a colorless low-melting compound, which is soluble in water, dioxane, and alcohols...
is typically added as a reducing agent.. [Ru(bipy)3]2+ is an octahedral coordination complex. The complex is chiral, with D3 symmetry
Symmetry group
The symmetry group of an object is the group of all isometries under which it is invariant with composition as the operation...
. It has been resolved into its enantiomer
Enantiomer
In chemistry, an enantiomer is one of two stereoisomers that are mirror images of each other that are non-superposable , much as one's left and right hands are the same except for opposite orientation. It can be clearly understood if you try to place your hands one over the other without...
s, which are kinetically stable.

[Ru(bipy)3]2+ absorbs UV light and visible light. An aqueous solution absorbs at 452 (+/-3 nm) with an extinction coefficient of 11,500 M−1cm−1. Solutions of the resulting excited state
Excited state
Excitation is an elevation in energy level above an arbitrary baseline energy state. In physics there is a specific technical definition for energy level which is often associated with an atom being excited to an excited state....
have a comparatively long lifetime of 890 nanosecond
Nanosecond
A nanosecond is one billionth of a second . One nanosecond is to one second as one second is to 31.7 years.The word nanosecond is formed by the prefix nano and the unit second. Its symbol is ns....
s in acetonitrile and 650 ns in water . The excited state relaxes to the ground state
Ground state
The ground state of a quantum mechanical system is its lowest-energy state; the energy of the ground state is known as the zero-point energy of the system. An excited state is any state with energy greater than the ground state...
by emission of a photon
Photon
In physics, a photon is an elementary particle, the quantum of the electromagnetic interaction and the basic unit of light and all other forms of electromagnetic radiation. It is also the force carrier for the electromagnetic force...
at the wavelength
Wavelength
In physics, the wavelength of a sinusoidal wave is the spatial period of the wave—the distance over which the wave's shape repeats.It is usually determined by considering the distance between consecutive corresponding points of the same phase, such as crests, troughs, or zero crossings, and is a...
of 600 nm. The long lifetime of the excited state is attributed to the fact that it is triplet, whereas the ground state is a singlet state
Diradical
A diradical in organic chemistry is a molecular species with two electrons occupying two degenerate molecular orbitals . They are known by their higher reactivities and shorter lifetimes. In a broader definition diradicals are even-electron molecules that have one bond less than the number...
and in part due to the fact that the structure of the molecule allows for charge separation. Singlet-triplet transitions are forbidden and therefore often slow.

The triplet excited state
Triplet state
A spin triplet is a set of three quantum states of a system, each with total spin S = 1 . The system could consist of a single elementary massive spin 1 particle such as a W or Z boson, or be some multiparticle state with total spin angular momentum of one.In physics, spin is the angular momentum...
has both oxidizing and reducing properties. This unusual situation arises because the excited state can be described as an Ru3+ complex containing a bipy- ligand. Thus, the photochemical properties of [Ru(bipy)3]2+ are reminiscent of the photosynthetic assembly
Photosynthesis
Photosynthesis is a chemical process that converts carbon dioxide into organic compounds, especially sugars, using the energy from sunlight. Photosynthesis occurs in plants, algae, and many species of bacteria, but not in archaea. Photosynthetic organisms are called photoautotrophs, since they can...
, which also involves separation of an electron
Electron
The electron is a subatomic particle with a negative elementary electric charge. It has no known components or substructure; in other words, it is generally thought to be an elementary particle. An electron has a mass that is approximately 1/1836 that of the proton...
and a hole
Electron hole
An electron hole is the conceptual and mathematical opposite of an electron, useful in the study of physics, chemistry, and electrical engineering. The concept describes the lack of an electron at a position where one could exist in an atom or atomic lattice...
.

[Ru(bipy)3]2+ has been examined as a photosensitiser for both the oxidation and reduction of water. Upon absorbing a photon, [Ru(bipy)3]2+ converts to the aforementioned triplet state, denoted [Ru(bipy)3]2+*. This species transfers an electron, located on one bipy ligand, to a sacrificial oxidant such as persulfate
Persulfate
The term persulfate refers to ions or compounds with more oxygen than normal sulfates.These do not have sulfur in a different oxidation state; rather, they contain peroxide units, where two oxygens take the place of one in a normal sulfate; the oxygen atoms are in oxidation state −1.The main forms...
(S2O82-). The resulting [Ru(bipy)3]3+ is a powerful oxidant and oxidizes water into O2 and protons via a metal oxide catalyst. Alternatively, the reducing power of [Ru(bipy)3]2+* can be harnessed to reduce methylviologen
Viologen
Viologens are toxic bipyridinium derivatives of 4,4'-bipyridyl. The name is because this class of compounds is easily reduced to the radical mono cation, which is intensely blue coloured....
, a recyclable carrier of electrons, which in turn reduces protons at a platinum
Platinum
Platinum is a chemical element with the chemical symbol Pt and an atomic number of 78. Its name is derived from the Spanish term platina del Pinto, which is literally translated into "little silver of the Pinto River." It is a dense, malleable, ductile, precious, gray-white transition metal...
catalyst. For this process to be catalytic, a sacrificial reductant, such as EDTA
EDTA
Ethylenediaminetetraacetic acid, widely abbreviated as EDTA , is a polyamino carboxylic acid and a colourless, water-soluble solid. Its conjugate base is named ethylenediaminetetraacetate. It is widely used to dissolve limescale. Its usefulness arises because of its role as a hexadentate ligand...
4- or triethanolamine
Triethanolamine
Triethanolamine, often abbreviated as TEA, is an organic chemical compound which is both a tertiary amine and a triol. A triol is a molecule with three alcohol groups. Like other amines, triethanolamine is a strong base due to the lone pair of electrons on the nitrogen atom. Triethanolamine can...
is provided to return the Ru(III) back to Ru(II).

Derivatives of [Ru(bipy)3]2+ are numerous. Such complexes are widely discussed for applications in biodiagnostics, photovoltaics
Dye-sensitized solar cells
A dye-sensitized solar cell is a low-cost solar cell belonging to the group of thin film solar cells. It is based on a semiconductor formed between a photo-sensitized anode and an electrolyte, a photoelectrochemical system...
and organic light-emitting diode
Organic light-emitting diode
An OLED is a light-emitting diode in which the emissive electroluminescent layer is a film of organic compounds which emit light in response to an electric current. This layer of organic semiconductor material is situated between two electrodes...
, but no derivative has been commercialized.

Photoredox catalysis using combination of [Ru(bipy)3]2+ catalyst and visible light has been considered as a tool for preparative organic chemistry since the 1970s. However, only a few research groups dealt with this topic until the beginning of the 21st century. Since 2008, development of this bond-forming strategy for organic synthesis has gained considerable momentum due to the seminal studies by MacMillan, Yoon, and Stephenson groups. Depending on the choice of suitable reductive or oxidative quencher, the [Ru(bipy)3]2+ catalyst can be used to trigger photoreduction or photooxidation, respectively. Current status of this field has been recently summarized in several review articles. It can be anticipated that photoredox reactivity of complexes based on metals other than Ru (e.g. Ir, Re, and bimetallic photocatalysts) will also be intensively explored. Additionally, transformations triggered by purely organic photoredox catalysts start to attract attention as highlighted in the recent report by Zeitler group.