Trifels Castle is a medieval castle
Castle
A castle is a type of fortified structure built in Europe and the Middle East during the Middle Ages by European nobility. Scholars debate the scope of the word castle, but usually consider it to be the private fortified residence of a lord or noble...
at an elevation of 500 m (1,640.4 ft) near the small town of Annweiler
Annweiler am Trifels
Annweiler am Trifels, or Annweiler is a town in the Südliche Weinstraße district, in Rhineland-Palatinate, Germany. It is situated on the river Queich, 12 km west of Landau, and on the railway from Landau to Pirmasens....
, in the Palatinate region of southwestern Germany
Germany
Germany , officially the Federal Republic of Germany , is a federal parliamentary republic in Europe. The country consists of 16 states while the capital and largest city is Berlin. Germany covers an area of 357,021 km2 and has a largely temperate seasonal climate...
. It is located high above the Queich
Queich
The Queich is a tributary of the Rhine, which rises in the southern part of the Palatinate Forest, and flows through the Upper Rhine valley to its confluence with the Rhine in Germersheim. It is 52 km long and is one of the four major drainage systems of the Palatinate Forest along with the...
valley within the Palatinate Forest on one peak of a red sandstone
Buntsandstein
The Buntsandstein or Bunter sandstone is a lithostratigraphic and allostratigraphic unit in the subsurface of large parts of west and central Europe...
mountain split into three. Trifels Castle is on the peak of the Sonnenberg, and on both of the other two rock elevations there are castle ruins: Anebos Castle
Anebos Castle
Anebos Castle is a ruin of a mediaeval castle in the Palatinate Forest south of Anweiler in Rhineland-Palatinate, Germany.The name of the castle probably origins from the German word "Amboss" .- Geography :...
and Scharfenberg Castle (demotically called Münz). 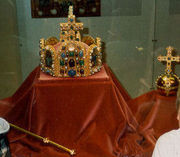 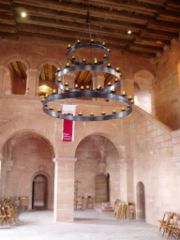 Trifels Castle has been gradually restored since the 19th century and today replicas of the Imperial Regalia
Imperial Regalia
The Imperial Regalia, insignia, or crown jewels are the regalia of the Emperors and Kings of the Holy Roman Empire. The most important parts are the Imperial Crown, the Holy Lance and the Imperial Sword...
(Reichskleinodien) of the Holy Roman Empire
Holy Roman Empire
The Holy Roman Empire was a realm that existed from 962 to 1806 in Central Europe.It was ruled by the Holy Roman Emperor. Its character changed during the Middle Ages and the Early Modern period, when the power of the emperor gradually weakened in favour of the princes...
are on display here. It is—together with Hambach Castle
Hambach Castle
Hambach Castle near the urban district Hambach of Neustadt an der Weinstraße in Rhineland-Palatinate, Germany, is considered to be the symbol of the German democracy movement because of the Hambacher Fest which occurred here in 1832.- Location :...
—one of the most popular tourist destinations in the state of Rhineland-Palatinate
Rhineland-Palatinate
Rhineland-Palatinate is one of the 16 states of the Federal Republic of Germany. It has an area of and about four million inhabitants. The capital is Mainz. English speakers also commonly refer to the state by its German name, Rheinland-Pfalz ....
.

The castle in Rhenish Franconia
Rhenish Franconia
Rhenish Franconia or Western Franconia denotes the western half of the central German stem duchy of Franconia in the 10th and 11th century, with its residence at the city of Worms...
was first mentioned in a 1081 deed of donation, when it was held by a local noble Diemar, a relative of Archbishop Siegfried I of Mainz. From him Trifels passed to the Imperial Salian dynasty
Salian dynasty
The Salian dynasty was a dynasty in the High Middle Ages of four German Kings , also known as the Frankish dynasty after the family's origin and role as dukes of Franconia...
. Emperor Henry V
Henry V, Holy Roman Emperor
Henry V was King of Germany and Holy Roman Emperor , the fourth and last ruler of the Salian dynasty. Henry's reign coincided with the final phase of the great Investiture Controversy, which had pitted pope against emperor...
in 1113 made it a Reichsburg (Imperial Castle), rejecting the inheritance claims raised by Archbishop Adalbert of Mainz
Adalbert of Mainz
Adalbert I von Saarbrücken , Archbishop of Mainz , played a key role in opposing Henry V, Holy Roman Emperor and in securing the election of Lothar III, Holy Roman Emperor.-Life:...
. The archbishop, allied with Henry's opponent Lothair of Supplinburg
Lothair III, Holy Roman Emperor
Lothair III of Supplinburg , was Duke of Saxony , King of Germany , and Holy Roman Emperor from 1133 to 1137. The son of Count Gebhard of Supplinburg, his reign was troubled by the constant intriguing of Frederick I, Duke of Swabia and Duke Conrad of Franconia...
, had to spend several years of imprisonment at Trifels.

Upon the death of Emperor Henry V in 1125, his nephew Duke Frederick II of Swabia
Frederick II, Duke of Swabia
Frederick II , called the One-Eyed, was the second Hohenstaufen duke of Swabia from 1105. He was the eldest son of Frederick I and Agnes....
made the castle a place of safekeeping for the Imperial Regalia of the Hohenstaufen emperors until in 1220 Frederick II of Hohenstaufen
Frederick II, Holy Roman Emperor
Frederick II , was one of the most powerful Holy Roman Emperors of the Middle Ages and head of the House of Hohenstaufen. His political and cultural ambitions, based in Sicily and stretching through Italy to Germany, and even to Jerusalem, were enormous...
moved them to Waldburg
Waldburg
Waldburg is a town in the district of Ravensburg in Baden-Württemberg in Germany. Most notably is the medieval castle that sits atop the large hill in the town...
Castle in Swabia
Duke of Swabia
The following is a list of Dukes of Swabia in southwest Germany.Swabia was one of the five stem duchies of the medieval German kingdom, and its dukes were thus among the most powerful magnates of Germany. The most notable family to hold Swabia were the Hohenstaufen, who held it, with a brief...
. Trifels Castle is also famous as the site where King Richard I of England
Richard I of England
Richard I was King of England from 6 July 1189 until his death. He also ruled as Duke of Normandy, Duke of Aquitaine, Duke of Gascony, Lord of Cyprus, Count of Anjou, Count of Maine, Count of Nantes, and Overlord of Brittany at various times during the same period...
(Richard the Lionheart) was imprisoned after he was captured by Duke Leopold V of Austria
Leopold V, Duke of Austria
Leopold V , the Virtuous, was a Babenberg duke of Austria from 1177 and of Styria from 1192 until his death...
near Vienna in December 1192 on his return from the Third Crusade
Third Crusade
The Third Crusade , also known as the Kings' Crusade, was an attempt by European leaders to reconquer the Holy Land from Saladin...
. Handed over to Emperor Henry VI of Hohenstaufen
Henry VI, Holy Roman Emperor
Henry VI was King of Germany from 1190 to 1197, Holy Roman Emperor from 1191 to 1197 and King of Sicily from 1194 to 1197.-Early years:Born in Nijmegen,...
, a period of three weeks of captivity at Trifels from 31 March to 19 April 1193 is well documented. According to legend, Richard was found and freed by the trobador Blondel de Nesle; in fact, he was released for an enormous ransom.

After the fall of the Hohenstaufen dynasty, the castle was pledged several times; it finally fell to the Dukes of Palatinate-Simmern and Zweibrücken
Palatinate-Simmern and Zweibrücken
Palatinate-Simmern and Zweibrücken was a state of the Holy Roman Empire based in the Simmern and Zweibrücken in modern Rhineland-Palatinate, Germany....
in 1410 and decayed after the Thirty Years' War
Thirty Years' War
The Thirty Years' War was fought primarily in what is now Germany, and at various points involved most countries in Europe. It was one of the most destructive conflicts in European history....
. From about 1840, the Wittelsbach kings of Bavaria
Kingdom of Bavaria
The Kingdom of Bavaria was a German state that existed from 1806 to 1918. The Bavarian Elector Maximilian IV Joseph of the House of Wittelsbach became the first King of Bavaria in 1806 as Maximilian I Joseph. The monarchy would remain held by the Wittelsbachs until the kingdom's dissolution in 1918...
had the castle rebuilt. It was significantly enlarged during the Nazi era
Nazi Germany
Nazi Germany , also known as the Third Reich , but officially called German Reich from 1933 to 1943 and Greater German Reich from 26 June 1943 onward, is the name commonly used to refer to the state of Germany from 1933 to 1945, when it was a totalitarian dictatorship ruled by...
, supervised by the Bavarian prime minister Ludwig Siebert
Ludwig Siebert (politician)
Ludwig Siebert was a Nazi politician and Bavarian prime minister from 1933 to 1942.-Life:...
.

The present-day castle is in large parts not true to the medieæval original. It is characterized by a large well tower outside the ring wall, linked to the castle by a bridge. The surrounding rocky landscape is a popular venue for mountaineers.