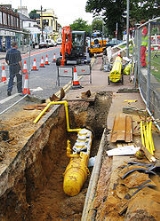 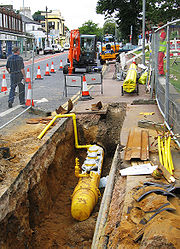 A trench is a type of excavation or depression in the ground. Trenches are generally defined by being deeper than they are wide (as opposed to a wider gully
Gully
A gully is a landform created by running water, eroding sharply into soil, typically on a hillside. Gullies resemble large ditches or small valleys, but are metres to tens of metres in depth and width...
or ditch
Ditch
A ditch is usually defined as a small to moderate depression created to channel water.In Anglo-Saxon, the word dïc already existed and was pronounced 'deek' in northern England and 'deetch' in the south. The origins of the word lie in digging a trench and forming the upcast soil into a bank...
), and by being narrow compared to their length (as opposed to a simple hole).

Some trenches are created as a result of erosion by river
River
A river is a natural watercourse, usually freshwater, flowing towards an ocean, a lake, a sea, or another river. In a few cases, a river simply flows into the ground or dries up completely before reaching another body of water. Small rivers may also be called by several other names, including...
s (which may have long since fallen dry), others are created by geological movement of tectonic plates
Tectonic Plates
Tectonic Plates is a 1992 independent Canadian film directed by Peter Mettler. Mettler also wrote the screenplay based on the play by Robert Lepage. The film stars Marie Gignac, Céline Bonnier and Robert Lepage.-Plot summary:...
, such as rift valley
Rift valley
A rift valley is a linear-shaped lowland between highlands or mountain ranges created by the action of a geologic rift or fault. This action is manifest as crustal extension, a spreading apart of the surface which is subsequently further deepened by the forces of erosion...
s or more commonly oceanic trench
Oceanic trench
The oceanic trenches are hemispheric-scale long but narrow topographic depressions of the sea floor. They are also the deepest parts of the ocean floor....
es. Some oceanic trenches include the Mariana Trench
Mariana Trench
The Mariana Trench or Marianas Trench is the deepest part of the world's oceans. It is located in the western Pacific Ocean, to the east of the Mariana Islands. The trench is about long but has a mean width of only...
and the Challenger Deep
Challenger Deep
The Challenger Deep is the deepest known point in the oceans, with a depth of to by direct measurement from submersibles, and slightly more by sonar bathymetry . It is located at the southern end of the Mariana Trench near the Mariana Islands group...
. The latter form is relatively deep (ca. 10 km), linear and narrow, and is formed by plate subduction
Subduction
In geology, subduction is the process that takes place at convergent boundaries by which one tectonic plate moves under another tectonic plate, sinking into the Earth's mantle, as the plates converge. These 3D regions of mantle downwellings are known as "Subduction Zones"...
when plates converge.

In the civil engineering
Civil engineering
Civil engineering is a professional engineering discipline that deals with the design, construction, and maintenance of the physical and naturally built environment, including works like roads, bridges, canals, dams, and buildings...
field of construction or maintenance of infrastructure, trenches play a major role. They may be created to search for pipes and other infrastructure that is known to be underground in the general area, but whose exact location has been lost ('search trench' or 'search slit'). They are also used to underground easily damaged and obstructive infrastructure or utilities (such as gas mains, water mains or telephone line
Telephone line
A telephone line or telephone circuit is a single-user circuit on a telephone communication system...
s). A similar use for higher bulk would be in pipeline transport
Pipeline transport
Pipeline transport is the transportation of goods through a pipe. Most commonly, liquids and gases are sent, but pneumatic tubes that transport solid capsules using compressed air are also used....
. Finally, trenches may be created as the first step of creating a foundation wall
Foundation (architecture)
A foundation is the lowest and supporting layer of a structure. Foundations are generally divided into two categories: shallow foundations and deep foundations.-Shallow foundations:...
.

Trenches have often been dug for defense. In the pre-firearm
Firearm
A firearm is a weapon that launches one, or many, projectile at high velocity through confined burning of a propellant. This subsonic burning process is technically known as deflagration, as opposed to supersonic combustion known as a detonation. In older firearms, the propellant was typically...
eras, they were mainly a type of hindrance for an attacker of a fortified location, such as the moat
Moat
A moat is a deep, broad ditch, either dry or filled with water, that surrounds a castle, other building or town, historically to provide it with a preliminary line of defence. In some places moats evolved into more extensive water defences, including natural or artificial lakes, dams and sluices...
around a castle
Castle
A castle is a type of fortified structure built in Europe and the Middle East during the Middle Ages by European nobility. Scholars debate the scope of the word castle, but usually consider it to be the private fortified residence of a lord or noble...
(this is technically called a ditch
Ditch
A ditch is usually defined as a small to moderate depression created to channel water.In Anglo-Saxon, the word dïc already existed and was pronounced 'deek' in northern England and 'deetch' in the south. The origins of the word lie in digging a trench and forming the upcast soil into a bank...
). An early example of this can be seen in the Battle of the Trench
Battle of the Trench
The Battle of the Trench also known as Battle of Ahzab, Battle of the Confederates and Siege of Medina , was a fortnight-long siege of Yathrib by Arab and Jewish tribes. The strength of the confederate armies is estimated around 10,000 men with six hundred horses and some camels, while the...
.

With the advent of accurate firearms, trenches were used to shelter troops. The Māori of New Zealand
New Zealand
New Zealand is an island country in the south-western Pacific Ocean comprising two main landmasses and numerous smaller islands. The country is situated some east of Australia across the Tasman Sea, and roughly south of the Pacific island nations of New Caledonia, Fiji, and Tonga...
used elaborate trench systems to defeat attacking British
United Kingdom
The United Kingdom of Great Britain and Northern IrelandIn the United Kingdom and Dependencies, other languages have been officially recognised as legitimate autochthonous languages under the European Charter for Regional or Minority Languages...
forces in several battles from 1840. Trench warfare and tactics evolved further in World War I
World War I
World War I , which was predominantly called the World War or the Great War from its occurrence until 1939, and the First World War or World War I thereafter, was a major war centred in Europe that began on 28 July 1914 and lasted until 11 November 1918...
and the Crimean War
Crimean War
The Crimean War was a conflict fought between the Russian Empire and an alliance of the French Empire, the British Empire, the Ottoman Empire, and the Kingdom of Sardinia. The war was part of a long-running contest between the major European powers for influence over territories of the declining...
, until systems of extensive main trenches, backup trenches (in case the first lines were overrun) and communication trenches often stretched dozens of kilometres along a front without interruption, and some kilometres further back from the front line.

The 'trench method' is used for searching and excavating ancient ruins or to dig into strata
Stratum
In geology and related fields, a stratum is a layer of sedimentary rock or soil with internally consistent characteristics that distinguish it from other layers...
of sedimented material to get a sideways (layered) view of the deposits – with a hope of being able to place found objects or materials in a chronological order. The advantage of this method is that it destroys only a small part of the site (those areas where the trenches, often arranged in a grid pattern, are located). However, this method also has the disadvantage of only revealing small slices of the whole volume, and modern archeological digs usually employ combination methods.