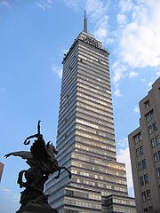 Encyclopedia
The Torre Latinoamericana (literally, "Latin-American Tower") is a building
Building
In architecture, construction, engineering, real estate development and technology the word building may refer to one of the following:...
in downtown Mexico City
Mexico City
Mexico City is the Federal District , capital of Mexico and seat of the federal powers of the Mexican Union. It is a federal entity within Mexico which is not part of any one of the 31 Mexican states but belongs to the federation as a whole...
, Mexico
Mexico
The United Mexican States , commonly known as Mexico , is a federal constitutional republic in North America. It is bordered on the north by the United States; on the south and west by the Pacific Ocean; on the southeast by Guatemala, Belize, and the Caribbean Sea; and on the east by the Gulf of...
. Its central location, height (183 m or 597 ft; 45 stories) and history make it one of the city's most important landmarks. It is also widely recognized internationally as an engineering and architectural
Architecture
Architecture is both the process and product of planning, designing and construction. Architectural works, in the material form of buildings, are often perceived as cultural and political symbols and as works of art...
landmark since it was the world's first major skyscraper
Skyscraper
A skyscraper is a tall, continuously habitable building of many stories, often designed for office and commercial use. There is no official definition or height above which a building may be classified as a skyscraper...
successfully built on highly active seismic land.

Torre Latinoamericana was Mexico City's tallest building from 1956, when it was built, until the 1984 completion of the Torre Ejecutiva Pemex
Torre Ejecutiva Pemex
The Torre Ejecutiva Pemex is a skyscraper in Mexico City. The building was originally designed as a pair of 26-story towers, but was later transformed into a single 52-story, international style tower. On September 19, 1985, the tower was able to resist the 8.1 earthquake that struck Mexico City...
, which is 22m higher (although, if one subtracts the height of the TV antenna
Antenna (radio)
An antenna is an electrical device which converts electric currents into radio waves, and vice versa. It is usually used with a radio transmitter or radio receiver...
atop the Torre Latinoamericana, it was surpassed already in 1972 by the 207m high Hotel de México, which was subsequently remodelled and turned into the World Trade Center Mexico City).

The Torre Latinoamericana was built to headquarter La Latinoamericana, Seguros, S.A., an insurance
Insurance
In law and economics, insurance is a form of risk management primarily used to hedge against the risk of a contingent, uncertain loss. Insurance is defined as the equitable transfer of the risk of a loss, from one entity to another, in exchange for payment. An insurer is a company selling the...
company founded on April 30, 1906. The building took its name from this company as it began to be built during the postwar boom of the late 1940s, that lasted until the early 1970s. At the time of its construction, the insurance company was controlled by the Mexican tycoon Miguel S. Macedo, who headed one of Mexico's largest financial concerns of that time in this country.

Originally the insurance company occupied a smaller building at the same location. In 1947 it temporarily relocated to a nearby office while the tower was built. Once it was finished in 1956, the insurance company moved into the tower's 4th to 8th floors. The rest of the building's office space was for lease. At the time of its completion the Torre Latinoamericana was the 45th tallest building in the world. Its public observation deck on the 44th floor is the highest in Mexico City.

The project was designed and executed by Dr Leonardo Zeevaert and his brother Adolfo Zeevaert, Mexican civil engineers born in Veracruz
Veracruz
Veracruz, formally Veracruz de Ignacio de la Llave officially Estado Libre y Soberano de Veracruz de Ignacio de la Llave , is one of the 31 states that, along with the Federal District, comprise the 32 federative entities of Mexico. It is divided in 212 municipalities and its capital city is...
. Nathan M. Newmark
Nathan M. Newmark
Nathan Mortimore Newmark was an American structural engineer and academic. He was awarded the National Medal of Science for engineering.-Early life:...
was the main consultant. Its design consists of a steel frame construction and deep-seated pylons, which were necessary given Mexico City's frequent earthquakes and muddy soil composition, which makes the terrain tricky to build on. Prior to the construction, both engineers carried out a number of soil mechanics studies in the construction site, and designed the structure accordingly. Today this is common and even mandatory practice, but at the time it was quite an innovation.

The tower gained notoriety when it withstood the magnitude 7.9 1957 earthquake
Earthquake
An earthquake is the result of a sudden release of energy in the Earth's crust that creates seismic waves. The seismicity, seismism or seismic activity of an area refers to the frequency, type and size of earthquakes experienced over a period of time...
, thanks to its outstanding design and strength. This feat garnered it recognition in the form of the American Institute of Steel Construction
American Institute of Steel Construction
The American Institute of Steel Construction, often abbreviated AISC, is a not-for-profit technical institute and trade association for the use of structural steel in the construction industry of the United States. It is headquartered in Chicago, IL. Their mission is to make structural steel the...
Award of Merit for "the tallest building ever exposed to a huge seismic force" (as is attested by plaques in the building's lobby and observation deck). However, an even greater test came, by far, with the magnitude 8.1 September 19, 1985 earthquake
1985 Mexico City earthquake
The 1985 Mexico City earthquake, a magnitude 8.0 earthquake that struck Mexico City on the early morning of 19 September 1985 at around 7:19 AM , caused the deaths of at least 10,000 people and serious damage to the greater Mexico City Area. The complete seismic event...
, which destroyed many buildings in Mexico City, especially the ones built downtown, in the tower's neighborhood. The Torre Latinoamericana withstood this force without problems, and has thus become a symbol of safety in Mexico City. Today the tower is considered one of the safest buildings in the city despite its potentially dangerous location.

While it was being built, detractors said that there was no way a building of that size could withstand one of Mexico City's earthquakes. It was indeed the very first really high skyscraper built on a very active seismic zone. It was also the first one built with a fully aluminum and glass (both clear and cobalt-colored) façade.

There is a legend
Legend
A legend is a narrative of human actions that are perceived both by teller and listeners to take place within human history and to possess certain qualities that give the tale verisimilitude...
that on the day of the 1957 earthquake, Dr. Leonardo Zeevaert was inspecting something or other on the roof of the tower, and that he got to see and feel how his tower withstood the quake while the surrounding buildings collapsed. The truth is that during the September, 1985 earthquake, which took place at 7:19, Adolfo Zeevaert was already inside his office on the 25th floor. From that vantage point he was able to witness the destruction taking place while several buildings collapsed and the dust cloud that followed, all the while feeling the movement inside the tower. It could arguably be said that it was the first time that a builder and designer of a tall building witnessed first hand its behavior during a massive earthquake.

The tower is now co-owned by its original builder La Latinoamericana, Seguros, Inmobiliaria Torre Latinoamericana, a real estate firm. In 2002 seven of the 44 floors were purchased by Telcel and Banco Inbursa, both firms controlled by Mexican businessman Carlos Slim.

In 2006, the tower celebrated its 50th anniversary. A ceremony was held on April 30, 2006, which included the reopening of the newly-remodelled 37th to 44th floors, a site museum, and a fully remodeled Mirador, or observation deck, designed by Danish-born architect Palle Seiersen Frost. Also on that occasion were unveiled some recognitions granted by several architectural, engineering and communications institutions. The Torre Latinoamericana is also a member of the World Federation of Great Towers.

Plans for the tower include a facelift, which will redo the building's exteriors using new materials while maintaining the original design and look; since the tower is considered a historical monument, its exterior look cannot be altered.