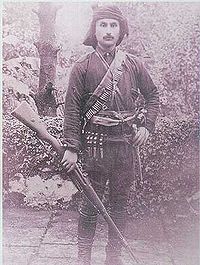 Topal Osman Agha was a Turkish
Turkish people
Turkish people, also known as the "Turks" , are an ethnic group primarily living in Turkey and in the former lands of the Ottoman Empire where Turkish minorities had been established in Bulgaria, Cyprus, Bosnia and Herzegovina, Georgia, Greece, Kosovo, Macedonia, and Romania...
militia leader of the late Ottoman
Ottoman Empire
The Ottoman EmpireIt was usually referred to as the "Ottoman Empire", the "Turkish Empire", the "Ottoman Caliphate" or more commonly "Turkey" by its contemporaries...
and early Republican
Turkey
Turkey , known officially as the Republic of Turkey , is a Eurasian country located in Western Asia and in East Thrace in Southeastern Europe...
periods. He commanded the 42nd Giresun Volunteer Regiment and 47th Giresun Volunteer Regiment. His last rank was Lieutenant-colonel of militia (Milis Yarbayı ).

He was a veteran of the 1912-1913 Balkan Wars
Balkan Wars
The Balkan Wars were two conflicts that took place in the Balkans in south-eastern Europe in 1912 and 1913.By the early 20th century, Montenegro, Bulgaria, Greece and Serbia, the countries of the Balkan League, had achieved their independence from the Ottoman Empire, but large parts of their ethnic...
where he became Lame .

For his work in the national movement, Osman became commander of Mustafa Kemal
Mustafa Kemal Atatürk
Mustafa Kemal Atatürk was an Ottoman and Turkish army officer, revolutionary statesman, writer, and the first President of Turkey. He is credited with being the founder of the Republic of Turkey....
's special "Bodyguard Regiment." and his loyal vassal Captain of militia Mustafa Kaptan was appointed the commander of the Guard Battalion of the Grand National Assembly. He choked Trabzon
Trabzon Province
Trabzon Province is a province of Turkey on the Black Sea coast. Located in a strategically important region, Trabzon is one of the oldest trade port cities in Anatolia. Neighbouring provinces are Giresun to the west, Gümüşhane to the southwest, Bayburt to the southeast and Rize to the east. The...
deputy Ali Shukri Bey (Ali Şükrü Bey ) to death on March 27, 1923, in response to Şükrü's criticism of Mustafa Kemal.

Mustafa Kemal ordered Ismail Hakki Bey (İsmail Hakkı Tekçe ), who was the commander of the Presidential Guard Battalion, to take Topal Osman and his fellows into custody. Topal was surrounded at his hideout in Seyran Bağları wards and in the resulting exchange of fire, was wounded and captured on April 1, 1923.

Toktamış Ateş of Istanbul University
Istanbul University
Istanbul University is a Turkish university located in Istanbul. The main campus is adjacent to Beyazıt Square.- Synopsis :A madrasa, a religious school, was established sometime in the 15th century after the Ottoman conquest of Constantinople. An institution of higher education named the...
claims that former primer minister Tansu Çiller
Tansu Çiller
Tansu Penbe Çiller is a Turkish economist and politician. She was Turkey's first and only female Prime Minister.- Early career :She is the daughter of a Turkish governor of Bilecik province during the 1950s. She graduated from the School of Economics at Robert College after finishing the American...
had once promised to open a university in Topal's name.