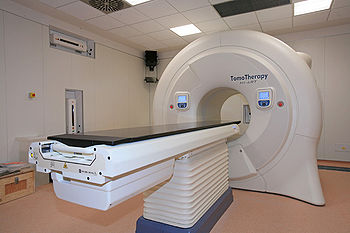 Tomotherapy is a type of radiation therapy in which the radiation is delivered slice-by-slice (hence the use of the Greek
Ancient Greek
Ancient Greek is the stage of the Greek language in the periods spanning the times c. 9th–6th centuries BC, , c. 5th–4th centuries BC , and the c. 3rd century BC – 6th century AD of ancient Greece and the ancient world; being predated in the 2nd millennium BC by Mycenaean Greek...
prefix tomo-, which means "slice"). This method of delivery differs from other forms of external beam radiation therapy in which the entire tumor volume is irradiated
at one time.

The first implementation of tomotherapy was the Corvus system developed by Nomos Corporation. This was the first commercial system for planning and delivering intensity modulated radiation therapy (IMRT). The original system, designed solely for use in the brain, incorporated a rigid skull-based fixation system to prevent patient motion between the delivery of each slice of radiation. But some users eschewed the fixation system and applied the technique to tumors in many different parts of the body.

In general, radiation therapy (or radiotherapy) has developed with a strong reliance on homogeneity of dose throughout the tumor. Tomotherapy embodies the sequential delivery of radiation to different parts of the tumor which raises two important issues. First, this method is known as "field matching" and brings with it the possibility of a less-than-perfect match between two adjacent fields with a resultant hot and/or cold spot within the tumor. The second issue is that if the patient or tumor moves during this sequential delivery, then again, a hot or cold spot will result. The first problem can be overcome, or at least minimized, by careful construction of the beam delivery system. The second requires close attention to the position of the target throughout treatment delivery.

The Corvus tomotherapy system achieved great popularity because it provided a mass market solution to IMRT very early compared to other vendors' systems. Generally speaking, dose homogeneity is less in IMRT than in 3D conformal radiation therapy which may account for the relative lack of concern regarding the field matching issue.

At this time, the Hi-Art system manufactured by TomoTherapy Inc. is the primary tomotherapy device in use although there are still a number of Corvus systems being used. TomoTherapy TomoHD systems are also in use. Other radiation therapy equipment vendors have recently responded to the challenge of short treatment times coupled with a full 360 degree treatment arc by developing methods of delivering IMRT using arcs. The major difference is that these methods are implemented on standard medical linear accelerators, thereby providing for complete volumetric irradiation.

TomoTherapy "beam on" times are comparable to normal radiation therapy
Radiation therapy
Radiation therapy , radiation oncology, or radiotherapy , sometimes abbreviated to XRT or DXT, is the medical use of ionizing radiation, generally as part of cancer treatment to control malignant cells.Radiation therapy is commonly applied to the cancerous tumor because of its ability to control...
treatment times (about 3–5 minutes beam on time for a common prostate treatment) but do add an additional 2–3 minutes for a daily CT. The daily CT is used to precisely place the radiation beam and allows the operator to modify the treatment should the patients anatomy change due to weight loss or tumor shrinkage (adaptive radiotherapy). Lung cancer
Lung cancer
Lung cancer is a disease characterized by uncontrolled cell growth in tissues of the lung. If left untreated, this growth can spread beyond the lung in a process called metastasis into nearby tissue and, eventually, into other parts of the body. Most cancers that start in lung, known as primary...
, head and neck tumor
Tumor
A tumor or tumour is commonly used as a synonym for a neoplasm that appears enlarged in size. Tumor is not synonymous with cancer...
s, breast cancer
Breast cancer
Breast cancer is cancer originating from breast tissue, most commonly from the inner lining of milk ducts or the lobules that supply the ducts with milk. Cancers originating from ducts are known as ductal carcinomas; those originating from lobules are known as lobular carcinomas...
, prostate cancer
Prostate cancer
Prostate cancer is a form of cancer that develops in the prostate, a gland in the male reproductive system. Most prostate cancers are slow growing; however, there are cases of aggressive prostate cancers. The cancer cells may metastasize from the prostate to other parts of the body, particularly...
, stereotactic radiosurgery
Radiosurgery
Radiosurgery is a medical procedure that allows non-invasive treatment of benign and malignant tumors. It is also known as stereotactic radiotherapy, when used to target lesions in the brain, and stereotactic body radiotherapy when used to target lesions in the body...
(SRS) and stereotactic body radiotherapy (SBRT) are some examples of treatments commonly performed using TomoTherapy.
While the first clinical use of TomoTherapy was in 2002, at the University of Wisconsin, under the leadership of Dr. Minesh Mehta, M.D., there are now more than 300 sites across Canada
Canada
Canada is a North American country consisting of ten provinces and three territories. Located in the northern part of the continent, it extends from the Atlantic Ocean in the east to the Pacific Ocean in the west, and northward into the Arctic Ocean...
, the United States
United States
The United States of America is a federal constitutional republic comprising fifty states and a federal district...
, Europe
Europe
Europe is, by convention, one of the world's seven continents. Comprising the westernmost peninsula of Eurasia, Europe is generally 'divided' from Asia to its east by the watershed divides of the Ural and Caucasus Mountains, the Ural River, the Caspian and Black Seas, and the waterways connecting...
and Asia
Asia
Asia is the world's largest and most populous continent, located primarily in the eastern and northern hemispheres. It covers 8.7% of the Earth's total surface area and with approximately 3.879 billion people, it hosts 60% of the world's current human population...
.