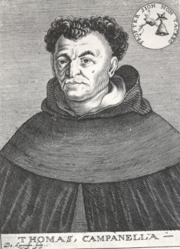 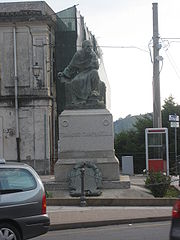 Tommaso Campanella OP baptized Giovanni Domenico Campanella, was an Italian
Italian people
The Italian people are an ethnic group that share a common Italian culture, ancestry and speak the Italian language as a mother tongue. Within Italy, Italians are defined by citizenship, regardless of ancestry or country of residence , and are distinguished from people...
philosopher, theologian, astrologer
Astrologer
An astrologer practices one or more forms of astrology. Typically an astrologer draws a horoscope for the time of an event, such as a person's birth, and interprets celestial points and their placements at the time of the event to better understand someone, determine the auspiciousness of an...
, and poet.

Born in Stignano
Stignano
Stignano is a comune in the Province of Reggio Calabria in the Italian region Calabria, located about 50 km south of Catanzaro and about 80 km northeast of Reggio Calabria. Stignano borders the following municipalities: Camini, Caulonia, Pazzano, Placanica, Riace, Stilo.-References:...
(in the county of Stilo
Stilo
Stilo is a town and comune in the province of Reggio Calabria, in the Calabria region of southern Italy. It is located 151 km from Reggio Calabria....
) in the province of Reggio di Calabria in southern Italy
Italy
Italy , officially the Italian Republic languages]] under the European Charter for Regional or Minority Languages. In each of these, Italy's official name is as follows:;;;;;;;;), is a unitary parliamentary republic in South-Central Europe. To the north it borders France, Switzerland, Austria and...
, Campanella was a child prodigy
Child prodigy
A child prodigy is someone who, at an early age, masters one or more skills far beyond his or her level of maturity. One criterion for classifying prodigies is: a prodigy is a child, typically younger than 18 years old, who is performing at the level of a highly trained adult in a very demanding...
. Son of a poor and illiterate cobbler
Shoemaking
Shoemaking is the process of making footwear. Originally, shoes were made one at a time by hand. Traditional handicraft shoemaking has now been largely superseded in volume of shoes produced by industrial mass production of footwear, but not necessarily in quality, attention to detail, or...
, he entered the Dominican Order
Dominican Order
The Order of Preachers , after the 15th century more commonly known as the Dominican Order or Dominicans, is a Catholic religious order founded by Saint Dominic and approved by Pope Honorius III on 22 December 1216 in France...
before the age of fifteen, taking the name of fra' Tommaso in honour of Thomas Aquinas
Thomas Aquinas
Thomas Aquinas, O.P. , also Thomas of Aquin or Aquino, was an Italian Dominican priest of the Catholic Church, and an immensely influential philosopher and theologian in the tradition of scholasticism, known as Doctor Angelicus, Doctor Communis, or Doctor Universalis...
. He studied theology and philosophy with several masters.

Early on, he became disenchanted with the Aristotelian
Aristotle
Aristotle was a Greek philosopher and polymath, a student of Plato and teacher of Alexander the Great. His writings cover many subjects, including physics, metaphysics, poetry, theater, music, logic, rhetoric, linguistics, politics, government, ethics, biology, and zoology...
orthodoxy and attracted by the empiricism
Empiricism
Empiricism is a theory of knowledge that asserts that knowledge comes only or primarily via sensory experience. One of several views of epistemology, the study of human knowledge, along with rationalism, idealism and historicism, empiricism emphasizes the role of experience and evidence,...
of Bernardino Telesio
Bernardino Telesio
Bernardino Telesio was an Italian philosopher and natural scientist.While his natural theories were later disproven, his emphasis on observation made him the "first of the moderns" who eventually developed thescientific method.-Biography:...
(1509–1588), who taught that knowledge is sensation and that all things in nature possess sensation. Campanella wrote his first work, Philosophia sensibus demonstrata ("Philosophy demonstrated by the senses"), published in 1592, in defence of Telesio.

In Naples
Naples
Naples is a city in Southern Italy, situated on the country's west coast by the Gulf of Naples. Lying between two notable volcanic regions, Mount Vesuvius and the Phlegraean Fields, it is the capital of the region of Campania and of the province of Naples...
he was also initiated in astrology
Astrology
Astrology consists of a number of belief systems which hold that there is a relationship between astronomical phenomena and events in the human world...
; astrological speculations would become a constant feature in his writings.
._.
Campanella's heterodox
Heterodoxy
Heterodoxy is generally defined as "any opinions or doctrines at variance with an official or orthodox position". As an adjective, heterodox is commonly used to describe a subject as "characterized by departure from accepted beliefs or standards"...
views, especially his opposition to the authority of Aristotle
Aristotle
Aristotle was a Greek philosopher and polymath, a student of Plato and teacher of Alexander the Great. His writings cover many subjects, including physics, metaphysics, poetry, theater, music, logic, rhetoric, linguistics, politics, government, ethics, biology, and zoology...
, brought him into conflict with the ecclesiastical authorities. Denounced to the Inquisition
Inquisition
The Inquisition, Inquisitio Haereticae Pravitatis , was the "fight against heretics" by several institutions within the justice-system of the Roman Catholic Church. It started in the 12th century, with the introduction of torture in the persecution of heresy...
and cited before the Holy Office in Rome
Rome
Rome is the capital of Italy and the country's largest and most populated city and comune, with over 2.7 million residents in . The city is located in the central-western portion of the Italian Peninsula, on the Tiber River within the Lazio region of Italy.Rome's history spans two and a half...
, he was confined in a convent
Convent
A convent is either a community of priests, religious brothers, religious sisters, or nuns, or the building used by the community, particularly in the Roman Catholic Church and in the Anglican Communion...
until 1597.

After his liberation, Campanella returned to Calabria, where he was accused of leading a conspiracy against the Spanish
Spain
Spain , officially the Kingdom of Spain languages]] under the European Charter for Regional or Minority Languages. In each of these, Spain's official name is as follows:;;;;;;), is a country and member state of the European Union located in southwestern Europe on the Iberian Peninsula...
rule in his hometown of Stilo. Campanella's aim was to establish a society based on the community of goods and wives, for on the basis of the prophecies of Joachim of Fiore
Joachim of Fiore
Joachim of Fiore, also known as Joachim of Flora and in Italian Gioacchino da Fiore , was the founder of the monastic order of San Giovanni in Fiore . He was a mystic, a theologian and an esoterist...
and his own astrological observations, he foresaw the advent of the Age of the Spirit in the year 1600. Betrayed by two of his fellow conspirators, he was captured and incarcerated in Naples, where he was tortured on the rack
Rack (torture)
The rack is a torture device consisting of a rectangular, usually wooden frame, slightly raised from the ground, with a roller at one, or both, ends, having at one end a fixed bar to which the legs were fastened, and at the other a movable bar to which the hands were tied...
. He made a full confession and would have been put to death if he had not feigned madness and set his cell on fire. He was tortured further (a total of seven times) and then, crippled and ill, was sentenced to life imprisonment.

Campanella was finally released from his prison in 1626, through Pope Urban VIII
Pope Urban VIII
Pope Urban VIII , born Maffeo Barberini, was pope from 1623 to 1644. He was the last pope to expand the papal territory by force of arms, and was a prominent patron of the arts and reformer of Church missions...
, who personally interceded on his behalf with Philip IV of Spain
Philip IV of Spain
Philip IV was King of Spain between 1621 and 1665, sovereign of the Spanish Netherlands, and King of Portugal until 1640...
. Taken to Rome
Rome
Rome is the capital of Italy and the country's largest and most populated city and comune, with over 2.7 million residents in . The city is located in the central-western portion of the Italian Peninsula, on the Tiber River within the Lazio region of Italy.Rome's history spans two and a half...
and held for a time by the Holy Office, Campanella was restored to full liberty in 1629. He lived for five years in Rome, where he was Urban's advisor in astrological matters.

In 1634, however, a new conspiracy in Calabria, led by one of his followers, threatened fresh troubles. With the aid of Cardinal Barberini and the French Ambassador de Noailles, he fled to France
France
The French Republic , The French Republic , The French Republic , (commonly known as France , is a unitary semi-presidential republic in Western Europe with several overseas territories and islands located on other continents and in the Indian, Pacific, and Atlantic oceans. Metropolitan France...
, where he was received at the court of Louis XIII
Louis XIII of France
Louis XIII was a Bourbon monarch who ruled as King of France and of Navarre from 1610 to 1643.Louis was only eight years old when he succeeded his father. His mother, Marie de Medici, acted as regent during Louis' minority...
with marked favour. Protected by Cardinal Richelieu and granted a liberal pension by the king, he spent the rest of his days in the convent of Saint-Honoré in Paris
Paris
Paris is the capital and largest city in France, situated on the river Seine, in northern France, at the heart of the Île-de-France region...
. His last work was a poem celebrating the birth of the future Louis XIV
Louis XIV of France
Louis XIV , known as Louis the Great or the Sun King , was a Bourbon monarch who ruled as King of France and Navarre. His reign, from 1643 to his death in 1715, began at the age of four and lasted seventy-two years, three months, and eighteen days...
(Ecloga in portentosam Delphini nativitatem).