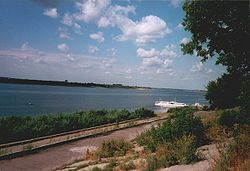 Tom is a river in Russia
Russia
Russia or , officially known as both Russia and the Russian Federation , is a country in northern Eurasia. It is a federal semi-presidential republic, comprising 83 federal subjects...
, a right tributary
Tributary
A tributary or affluent is a stream or river that flows into a main stem river or a lake. A tributary does not flow directly into a sea or ocean...
of the Ob
Ob River
The Ob River , also Obi, is a major river in western Siberia, Russia and is the world's seventh longest river. It is the westernmost of the three great Siberian rivers that flow into the Arctic Ocean .The Gulf of Ob is the world's longest estuary.-Names:The Ob is known to the Khanty people as the...
. Its length is 540 miles (871 km). Its source is in the Abakan mountains (a northern continuation of the Altay Mountains
Altay Mountains
The Altai Mountains are a mountain range in East-Central Asia, where Russia, China, Mongolia and Kazakhstan come together, and where the rivers Irtysh and Ob have their sources. The Altai Mountains are known as the original locus of the speakers of Turkic as well as other members of the proposed...
), and it flows northward through the Kuznetsk Basin
Kuznetsk Basin
The Kuznetsk Basin in southwestern Siberia, Russia, is one of the largest coal mining areas in the world, covering an area of around . It lies in the Kuznetsk Depression between Tomsk and Novokuznetsk in the basin of the Tom River...
. It flows into the Ob approximately 30 miles (50 km) north of Tomsk
Tomsk
Tomsk is a city and the administrative center of Tomsk Oblast, Russia, located on the Tom River. One of the oldest towns in Siberia, Tomsk celebrated its 400th anniversary in 2004...
.