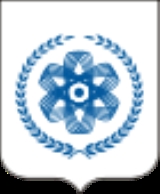 Encyclopedia
Seversk is a closed
Closed city
A closed city or closed town is a settlement with travel and residency restrictions in the Soviet Union and some of its successor countries. In modern Russia, such places are officially known as "closed administrative-territorial formations" ....
city in Tomsk Oblast
Tomsk Oblast
Tomsk Oblast is a federal subject of Russia . It lies in the southeastern West Siberian Plain, in the southwest of the Siberian Federal District. Its administrative center is the city of Tomsk. Population:...
, Russia
Russia
Russia or , officially known as both Russia and the Russian Federation , is a country in northern Eurasia. It is a federal semi-presidential republic, comprising 83 federal subjects...
, located 15 kilometres (9.3 mi) northwest of Tomsk
Tomsk
Tomsk is a city and the administrative center of Tomsk Oblast, Russia, located on the Tom River. One of the oldest towns in Siberia, Tomsk celebrated its 400th anniversary in 2004...
on the right bank of the Tom River
Tom River
Tom is a river in Russia, a right tributary of the Ob. Its length is 540 miles . Its source is in the Abakan mountains , and it flows northward through the Kuznetsk Basin...
. Population:

The current Chair of the City Duma
Duma
A Duma is any of various representative assemblies in modern Russia and Russian history. The State Duma in the Russian Empire and Russian Federation corresponds to the lower house of the parliament. Simply it is a form of Russian governmental institution, that was formed during the reign of the...
and Mayor is Grigory Shamin, who has served since 2010. The current city manager is Anatoly Abramov, who has served since August 2007.

Seversk is the site of the Siberian Group of Chemical Enterprises, founded in 1954. It comprises several nuclear reactor
Nuclear reactor
A nuclear reactor is a device to initiate and control a sustained nuclear chain reaction. Most commonly they are used for generating electricity and for the propulsion of ships. Usually heat from nuclear fission is passed to a working fluid , which runs through turbines that power either ship's...
s and chemical plants for separation, enrichment, and reprocessing of uranium
Uranium
Uranium is a silvery-white metallic chemical element in the actinide series of the periodic table, with atomic number 92. It is assigned the chemical symbol U. A uranium atom has 92 protons and 92 electrons, of which 6 are valence electrons...
and plutonium
Plutonium
Plutonium is a transuranic radioactive chemical element with the chemical symbol Pu and atomic number 94. It is an actinide metal of silvery-gray appearance that tarnishes when exposed to air, forming a dull coating when oxidized. The element normally exhibits six allotropes and four oxidation...
. Following an agreement in March 2003 between Russia
Russia
Russia or , officially known as both Russia and the Russian Federation , is a country in northern Eurasia. It is a federal semi-presidential republic, comprising 83 federal subjects...
and the United States
United States
The United States of America is a federal constitutional republic comprising fifty states and a federal district...
to shut down Russia's three remaining plutonium-producing reactors, two of the three plutonium producing reactors (the two that are sited at Seversk) have now been shut down.

Nuclear warheads
Nuclear weapon
A nuclear weapon is an explosive device that derives its destructive force from nuclear reactions, either fission or a combination of fission and fusion. Both reactions release vast quantities of energy from relatively small amounts of matter. The first fission bomb test released the same amount...
are produced and stored on the premises. One of the most serious nuclear accidents at SGCE occurred on 6 April 1993, when a tank containing a highly radioactive solution exploded. 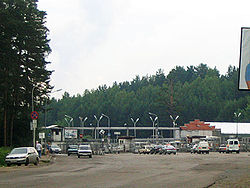 Seversk was a secret city in the Soviet Union
Soviet Union
The Soviet Union , officially the Union of Soviet Socialist Republics , was a constitutionally socialist state that existed in Eurasia between 1922 and 1991....
until President Boris Yeltsin
Boris Yeltsin
Boris Nikolayevich Yeltsin was the first President of the Russian Federation, serving from 1991 to 1999.Originally a supporter of Mikhail Gorbachev, Yeltsin emerged under the perestroika reforms as one of Gorbachev's most powerful political opponents. On 29 May 1990 he was elected the chairman of...
decreed in 1992 that such cities could use their historical names. The town appeared on no official maps until then. As it was the tradition with Soviet towns containing secret facilities, Tomsk-7 is actually a post office box number and implied that the place was located some distance from the city of Tomsk.

For many years, residents had restrictions on their ability to come and go from the city. Upon leaving Seversk, residents had to surrender their entry passes at the checkpoints and were forbidden from discussing where they worked or lived. However, in 1987 some restrictions were lifted due to the large number of residents who worked or studied in Tomsk.

Despite the order removing Seversk's secret status, the city still remains closed to non-residents. The city has six checkpoints where visitors must show entry documents. Permission to visit to the city may only be granted by the appropriate authorities through the institution being visited, or through a private party such as a close relative. Prior to May 2007, visitors applied for entry passes at a special office in Tomsk. This regime has been modified and visitors apply for entry documents at the main checkpoint.

There was a nuclear accident at the Tomsk-7 Reprocessing Complex on April 6, 1993, when a tank exploded while being cleaned with nitric
Nitric acid
Nitric acid , also known as aqua fortis and spirit of nitre, is a highly corrosive and toxic strong acid.Colorless when pure, older samples tend to acquire a yellow cast due to the accumulation of oxides of nitrogen. If the solution contains more than 86% nitric acid, it is referred to as fuming...
acid
Acid
An acid is a substance which reacts with a base. Commonly, acids can be identified as tasting sour, reacting with metals such as calcium, and bases like sodium carbonate. Aqueous acids have a pH of less than 7, where an acid of lower pH is typically stronger, and turn blue litmus paper red...
. The explosion released a cloud of radioactive gas. TIME magazine
Time (magazine)
Time is an American news magazine. A European edition is published from London. Time Europe covers the Middle East, Africa and, since 2003, Latin America. An Asian edition is based in Hong Kong...
has identified the Tomsk-7 explosion as one of the 10 world's "worst nuclear disasters".

Nine municipal cultural and artistic institutions successfully work in Seversk, as well as four establishments of additional education for children of artistic and aesthetic focus and two organizations of other forms of property - a Nonprofit Organization "House of Culture in the name of N. Ostrovskiy" and a cinema called "Mir".