Encyclopedia
Tokhtamysh was the prominent khan
Khan (title)
Khan is an originally Altaic and subsequently Central Asian title for a sovereign or military ruler, widely used by medieval nomadic Turko-Mongol tribes living to the north of China. 'Khan' is also seen as a title in the Xianbei confederation for their chief between 283 and 289...
of the White Horde, who briefly unified the White Horde and Blue Horde subdivisions of the Golden Horde
Golden Horde
The Golden Horde was a Mongol and later Turkicized khanate that formed the north-western sector of the Mongol Empire...
into a single state. He was a descendant of Genghis Khan
Genghis Khan
Genghis Khan , born Temujin and occasionally known by his temple name Taizu , was the founder and Great Khan of the Mongol Empire, which became the largest contiguous empire in history after his death....
's eldest grandson, Orda Khan
Orda Khan
Orda Ichen was a Mongol Khan and military strategist who ruled eastern part of the Ulus of Jochi during the 13th century.-First Khan of the Blue Horde:...
or his brother Tuqa-Timur.

Tokhtamysh appears in history in 1376, trying to overthrow his uncle Urus Khan
Urus Khan
Urus Khan was the eighth Khan of the White Horde, and a disputable Khan of the Blue Horde, he was a direct descendant of Genghis Khan. Urus himself is the direct ancestor of khans of the Kazakh Khanate.- Ancestor of Urus :...
, ruler of the White Horde, and fleeing to the great Timur
Timur
Timur , historically known as Tamerlane in English , was a 14th-century conqueror of West, South and Central Asia, and the founder of the Timurid dynasty in Central Asia, and great-great-grandfather of Babur, the founder of the Mughal Dynasty, which survived as the Mughal Empire in India until...
. Tokhtamysh outlived Urus and both his sons and forcefully ascended the throne of the White Horde in 1378 with Timur's backing.

Tokhtamysh dreamed of emulating his ancestors and made plans to reunite the Ulus Jochi. In 1380, he invaded the Blue Horde by fording across the Volga. The ruler of the Blue Horde, Mamai
Mamai
Mamai of Borjigin kin, was a powerful military commander of the Blue Horde in the 1370s which is now the Southern Ukrainian Steppes and the Crimean Peninsula....
, was killed shortly after the Battle of Kulikovo
Battle of Kulikovo
The Battle of Kulikovo was a battle between Tatar Mamai and Muscovy Dmitriy and portrayed by Russian historiography as a stand-off between Russians and the Golden Horde. However, the political situation at the time was much more complicated and concerned the politics of the Northeastern Rus'...
, making Tokhtamysh's victory over the horde all the easier.

Having divided the Blue and White Hordes into the Golden Horde
Golden Horde
The Golden Horde was a Mongol and later Turkicized khanate that formed the north-western sector of the Mongol Empire...
in 1382 Tokhtamysh led a successful campaign
Siege of Moscow (1382)
The Siege of Moscow in 1382 was a battle between Tokhtamysh, khan of the Golden Horde, and the Muscovite forces.-Background:After the death of Berdibeg, the Blue Horde fell into anarchy, with local khans in various places of the Horde's domains. During this time, Mamai Khan emerged as a kingmaker...
against Russia
Russia
Russia or , officially known as both Russia and the Russian Federation , is a country in northern Eurasia. It is a federal semi-presidential republic, comprising 83 federal subjects...
as a punishment for the Kulikovo defeat - setting back, though not ending, the Russian aspiration to free themselves of Mongol rule. In just six years, Tokhtamysh had reunified the Mongol lands from Crimea to Lake Balkhash
Lake Balkhash
Lake Balkhash is one of the largest lakes in Asia and 12th largest continental lake in the world. It is located in southeastern Kazakhstan, in Central Asia, and belongs to an endorheic basin shared by Kazakhstan and China, with a small part in Kyrgyzstan. The basin drains into the lake via seven...
. 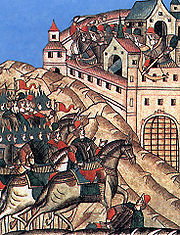 Believing he could emulate the successes of Genghis Khan
Genghis Khan
Genghis Khan , born Temujin and occasionally known by his temple name Taizu , was the founder and Great Khan of the Mongol Empire, which became the largest contiguous empire in history after his death....
himself, in 1385 Tokhtamysh, with an army of 50,000 (or five tumens), invaded Persia and took Tabriz
Tabriz
Tabriz is the fourth largest city and one of the historical capitals of Iran and the capital of East Azerbaijan Province. Situated at an altitude of 1,350 meters at the junction of the Quri River and Aji River, it was the second largest city in Iran until the late 1960s, one of its former...
. Returning north they took 200,000 slaves from Caucasus, including tens of thousands of Azeri Turks from the districts of Shirvan, Mugan, and Daghestan. As Tokhtamysh moved north from the Caucasus, Timur annexed Azerbaijan
Azerbaijan
Azerbaijan , officially the Republic of Azerbaijan is the largest country in the Caucasus region of Eurasia. Located at the crossroads of Western Asia and Eastern Europe, it is bounded by the Caspian Sea to the east, Russia to the north, Georgia to the northwest, Armenia to the west, and Iran to...
and Persia to his own expanding kingdom. Furious, Tokhtamysh turned back and made war on his former ally.

Eventually, Tokhtamysh conceded defeat and withdrew to the steppe. However, in 1387 he suddenly invaded Transoxiana
Transoxiana
Transoxiana is the ancient name used for the portion of Central Asia corresponding approximately with modern-day Uzbekistan, Tajikistan, southern Kyrgystan and southwest Kazakhstan. Geographically, it is the region between the Amu Darya and Syr Darya rivers...
, the heart of Timur's realm. Unfortunately for Tokhtamysh, heavy snow forced him back to the steppe.

In 1395, the scenario reached its climax as Timur attacked the Golden Horde and defeated Tokhtamysh at the Terek
Battle of the Terek River
The Battle of the Terek River was the second major battle of Tokhtamysh-Timur War. It took place at the Terek River, North Caucasus.Tokhtamysh cavalry attacked the right flank and the center of Timur's army. However, some Golden Horde emirs went over to Timur's side. This helped Timur defeat the...
. Timur sacked the capital, Sarai Berke, vassalized the Golden Horde, and placed a puppet ruler, Koirichak, on the throne of Orda's Ulus and appointed Temur Qutlugh
Temur Qutlugh
Temür Qutlugh was a khan of Golden Horde in 1397–1399. He was a son of Timur-Malik, khan of the White Horde, who struggled against Toqtamysh. After the death of Temur Malik in 1379 Qutlugh was reared at Toqtamysh's court. After an unsuccessful revolt against Toqtamysh in 1388, he, along with...
khan of the Horde.

Tokhtamysh escaped to the Ukrainian
Ukraine
Ukraine is a country in Eastern Europe. It has an area of 603,628 km², making it the second largest contiguous country on the European continent, after Russia...
steppes and asked for help from the Grand Duke Vytautas of Lithuania
Lithuania
Lithuania , officially the Republic of Lithuania is a country in Northern Europe, the biggest of the three Baltic states. It is situated along the southeastern shore of the Baltic Sea, whereby to the west lie Sweden and Denmark...
. In the great Battle of the Vorskla River
Battle of the Vorskla River
The Battle of the Vorskla River was a great battle in the medieval history of Eastern Europe. It was fought on August 12, 1399, between the Tatars, under Edigu and Temur Qutlugh, and the armies of Tokhtamysh and Grand Duke Vytautas of Lithuania...
(1399) the combined forces of Tokhtamysh and Vytautas were defeated by two of Timur's generals, khan Temur Qutlugh and emir
Emir
Emir , meaning "commander", "general", or "prince"; also transliterated as Amir, Aamir or Ameer) is a title of high office, used throughout the Muslim world...
(murza, visir) Edigu
Edigu
Edigu was a Mongol emir of the White Horde who founded the new political entity, which came to be known as the Nogai Horde....
. The defeated Tokhtamysh was killed in Tyumen
Tyumen
Tyumen is the largest city and the administrative center of Tyumen Oblast, Russia, located on the Tura River east of Moscow. Population: Tyumen is the oldest Russian settlement in Siberia. Founded in 16th century to support Russia's eastward expansion, the city has remained one of the most...
by Edigu's men in 1406.