Encyclopedia
Tlatelolco is an area in the Cuauhtémoc
Cuauhtémoc, D.F.
Cuauhtémoc, named after the former Aztec leader, is one of the 16 boroughs of the Federal district of Mexico City. It consists of the oldest parts of the city, extending over what was the entire city in the 1920s. This area is the historic and culture center of the city, although it is not the...
borough of Mexico City
Mexico City
Mexico City is the Federal District , capital of Mexico and seat of the federal powers of the Mexican Union. It is a federal entity within Mexico which is not part of any one of the 31 Mexican states but belongs to the federation as a whole...
, centered on the Plaza de las Tres Culturas
Plaza de las Tres Culturas
The Plaza de las Tres Culturas is the main square within the Tlatelolco neighbourhood of Mexico City. The name "Three Cultures" is in recognition of the three periods of Mexican history reflected by those buildings pre-Columbian, Spanish colonial, and the independent "mestizo" nation...
, a square surrounded on three sides by an excavated Aztec
Aztec
The Aztec people were certain ethnic groups of central Mexico, particularly those groups who spoke the Nahuatl language and who dominated large parts of Mesoamerica in the 14th, 15th and 16th centuries, a period referred to as the late post-classic period in Mesoamerican chronology.Aztec is the...
archaeological site
Tlatelolco (archaeological site)
Tlatelolco is an archaeological excavation site in Mexico City, Mexico where remains of the pre-Columbian city-state of the same name have been found...
, a 17th century church called Templo de Santiago, a former convent, and office complexes that used to belong to the Ministry of foreign relations and now are property of the National Autonomous University of Mexico
National Autonomous University of Mexico
The Universidad Nacional Autónoma de México is a university in Mexico. UNAM was founded on 22 September 1910 by Justo Sierra as a liberal alternative to the Roman Catholic-sponsored Royal and Pontifical University of Mexico The Universidad Nacional Autónoma de México (UNAM) (National Autonomous...
. 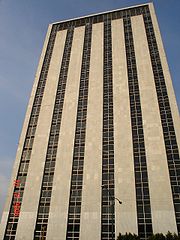 The Nonoalco-Tlatelolco housing project
Unidad Habitacional Nonoalco-Tlatelolco
The Unidad Habitacional Nonoalco-Tlatelolco is the largest apartment complex in Mexico, located in the Cuautemoc borough of Mexico City. It was built in the 1960s by architect Mario Pani. Originally, the complex had 102 apartment buildings, with its own schools, hospitals, stores and more, to make...
, built in the 1960s, is served by Metro Tlatelolco
Metro Tlatelolco
Metro Tlatelolco is a metro station along Line 3 of the Mexico City Metro. It is located in the Tlatelolco neighbourhood of the Cuauhtémoc borough of Mexico City, to the north of the downtown area...
. It is also home to the pyramid-shaped Banobras
Banobras
Banco Nacional de Obras y Servicios Públicos, SNC or Banobras is state owned development bank in Mexico. Its core business is sub national and project finance...
building, which houses a 47-bell carillon
Carillon
A carillon is a musical instrument that is typically housed in a free-standing bell tower, or the belfry of a church or other municipal building. The instrument consists of at least 23 cast bronze, cup-shaped bells, which are played serially to play a melody, or sounded together to play a chord...
. At 125 meters, this is the world's tallest carillon tower. There is also a building covered with white marble that is the former home of the Secretariat of Foreign Affairs
Secretariat of Foreign Affairs (Mexico)
The Secretariat of Foreign Affairs is the government department responsible for Mexico's foreign affairs.-Missions:Mexico currently has:* 73 Embassies* 33 Consulates-Generals* 35 Consulates...
(SRE).

In 1967, the Treaty of Tlatelolco
Treaty of Tlatelolco
The Treaty of Tlatelolco is the conventional name given to the Treaty for the Prohibition of Nuclear Weapons in Latin America and the Caribbean...
signed here, with the aim of establishing a nuclear weapon
Nuclear weapon
A nuclear weapon is an explosive device that derives its destructive force from nuclear reactions, either fission or a combination of fission and fusion. Both reactions release vast quantities of energy from relatively small amounts of matter. The first fission bomb test released the same amount...
-free zone throughout Latin America
Latin America
Latin America is a region of the Americas where Romance languages  – particularly Spanish and Portuguese, and variably French – are primarily spoken. Latin America has an area of approximately 21,069,500 km² , almost 3.9% of the Earth's surface or 14.1% of its land surface area...
and the Caribbean
Caribbean
The Caribbean is a crescent-shaped group of islands more than 2,000 miles long separating the Gulf of Mexico and the Caribbean Sea, to the west and south, from the Atlantic Ocean, to the east and north...
. Since then, all the region's countries have signed and ratified the treaty.

On October 2, 1968, ten days before the start of the 1968 Summer Olympics
1968 Summer Olympics
The 1968 Summer Olympics, officially known as the Games of the XIX Olympiad, were an international multi-sport event held in Mexico City, Mexico in October 1968. The 1968 Games were the first Olympic Games hosted by a developing country, and the first Games hosted by a Spanish-speaking country...
the plaza was the scene of the Tlatelolco massacre
Tlatelolco massacre
The Tlatelolco massacre, also known as The Night of Tlatelolco , was a government massacre of student and civilian protesters and bystanders that took place during the afternoon and night of October 2, 1968, in the Plaza de las Tres Culturas in the Tlatelolco section of Mexico City...
, in which more than 300 student protesters were killed by the army
Army
An army An army An army (from Latin arma "arms, weapons" via Old French armée, "armed" (feminine), in the broadest sense, is the land-based military of a nation or state. It may also include other branches of the military such as the air force via means of aviation corps...
and police
Police
The police is a personification of the state designated to put in practice the enforced law, protect property and reduce civil disorder in civilian matters. Their powers include the legitimized use of force...
.