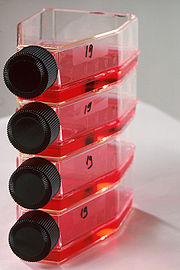 Tissue culture is the growth of tissues
Biological tissue
Tissue is a cellular organizational level intermediate between cells and a complete organism. A tissue is an ensemble of cells, not necessarily identical, but from the same origin, that together carry out a specific function. These are called tissues because of their identical functioning...
or cells
Cell (biology)
The cell is the basic structural and functional unit of all known living organisms. It is the smallest unit of life that is classified as a living thing, and is often called the building block of life. The Alberts text discusses how the "cellular building blocks" move to shape developing embryos....
separate from the organism. This is typically facilitated via use of a liquid, semi-solid, or solid growth medium
Growth medium
A growth medium or culture medium is a liquid or gel designed to support the growth of microorganisms or cells, or small plants like the moss Physcomitrella patens.There are different types of media for growing different types of cells....
, such as broth or agar. Tissue culture commonly refers to the culture of animal cells and tissues, while the more specific term plant tissue culture
Plant tissue culture
Plant tissue culture is a collection of techniques used to maintain or grow plant cells, tissues or organs under sterile conditions on a nutrient culture medium of known composition. Plant tissue culture is widely used to produce clones of a plant in a method known as micropropagation...
is being named for the plants.

In 1885 Wilhelm Roux
Wilhelm Roux
Wilhelm Roux was a German zoologist and pioneer of experimental embryology.Roux was born and educated in Jena, Germany where he attended university and studied under Ernst Haeckel. He also attended university in Berlin and Strasbourg and studied under Gustav Schwalbe, Friedrich Daniel von...
removed a section of the medullary plate of an embryo
Embryo
An embryo is a multicellular diploid eukaryote in its earliest stage of development, from the time of first cell division until birth, hatching, or germination...
nic chicken
Chicken
The chicken is a domesticated fowl, a subspecies of the Red Junglefowl. As one of the most common and widespread domestic animals, and with a population of more than 24 billion in 2003, there are more chickens in the world than any other species of bird...
and maintained it in a warm saline solution for several days, establishing the basic principle of tissue culture.
In 1907 the zoologist Ross Granville Harrison
Ross Granville Harrison
Ross Granville Harrison was an American biologist and anatomist credited as the first to work successfully with artificial tissue culture....
demonstrated the growth of frog nerve cell processes in a medium of clotted lymph
Lymph
Lymph is considered a part of the interstitial fluid, the fluid which lies in the interstices of all body tissues. Interstitial fluid becomes lymph when it enters a lymph capillary...
.
In 1913, E. Steinhardt, C. Israeli, and R. A. Lambert grew vaccinia
Vaccinia
Vaccinia virus is a large, complex, enveloped virus belonging to the poxvirus family. It has a linear, double-stranded DNA genome approximately 190 kbp in length, and which encodes for approximately 250 genes. The dimensions of the virion are roughly 360 × 270 × 250 nm, with a mass of...
virus
Virus
A virus is a small infectious agent that can replicate only inside the living cells of organisms. Viruses infect all types of organisms, from animals and plants to bacteria and archaea...
in fragments of guinea pig cornea
Cornea
The cornea is the transparent front part of the eye that covers the iris, pupil, and anterior chamber. Together with the lens, the cornea refracts light, with the cornea accounting for approximately two-thirds of the eye's total optical power. In humans, the refractive power of the cornea is...
l tissue. In 1996, the first use of regenerative tissue was used to replace a small distance of a urethra, which led to the understanding that the technique of obtaining samples of tissue, growing it outside the body without a scaffold, and reapplying it, can be used for only small distances of less than 1 cm.

In modern usage, tissue culture generally refers to the growth of cells from a tissue from a multicellular organism in vitro. These cells may be cells isolated from a donor organism, primary cells, or an immortalised cell line
Immortalised cell line
An immortalised cell line is population of cells from a multicellular organism which would normally not proliferate indefinitely but, due to mutation, have evaded normal cellular senescence and instead can keep undergoing division. The cells can therefore be grown for prolonged periods in vitro...
. The term tissue culture is often used interchangeably with cell culture
Cell culture
Cell culture is the complex process by which cells are grown under controlled conditions. In practice, the term "cell culture" has come to refer to the culturing of cells derived from singlecellular eukaryotes, especially animal cells. However, there are also cultures of plants, fungi and microbes,...

Tissue culture is an important tool for the study of the biology of cells from multicellular organisms. It provides an in vitro model of the tissue in a well defined environment which can be easily manipulated and analysed.