Encyclopedia
Thun is a municipality
Municipalities of Switzerland
Communes , also known as municipalities, are the smallest government division in Switzerland, numbering 2,596 . While many have a population of a few hundred citizens, the largest cities such as Zürich or Geneva also have the legal status of municipalities...
in the administrative district of Thun
Thun (administrative district)
Thun District in the Canton of Bern was created on 1 January 2010. It is part of the Oberland administrative region. It contains 35 municipalities with an area of and a population of 103,233....
in the canton
Cantons of Switzerland
The 26 cantons of Switzerland are the member states of the federal state of Switzerland. Each canton was a fully sovereign state with its own borders, army and currency from the Treaty of Westphalia until the establishment of the Swiss federal state in 1848...
of Bern in Switzerland
Switzerland
Switzerland name of one of the Swiss cantons. ; ; ; or ), in its full name the Swiss Confederation , is a federal republic consisting of 26 cantons, with Bern as the seat of the federal authorities. The country is situated in Western Europe,Or Central Europe depending on the definition....
with about 42,136 inhabitants (near 90,000 in the agglomeration), as of 1 January 2006.

It is located where the River Aar flows out of Lake Thun
Lake Thun
Lake Thun is an Alpine lake in the Bernese Oberland in Switzerland. It took its name from the city of Thun, on its northern shore.Lake Thun's approximately 2,500 km² large catchment area frequently causes local flooding after heavy rainfalls...
(Thunersee), 30 km south of Bern.
Besides tourism, machine and precision instrument engineering, the largest garrison
Garrison
Garrison is the collective term for a body of troops stationed in a particular location, originally to guard it, but now often simply using it as a home base....
in the country, the food industry and publishing are of economic importance to Thun.

The area of what is now Thun was inhabited since the Neolithic
Neolithic
The Neolithic Age, Era, or Period, or New Stone Age, was a period in the development of human technology, beginning about 9500 BC in some parts of the Middle East, and later in other parts of the world. It is traditionally considered as the last part of the Stone Age...
age (mid-3rd millennium BC
3rd millennium BC
The 3rd millennium BC spans the Early to Middle Bronze Age.It represents a period of time in which imperialism, or the desire to conquer, grew to prominence, in the city states of the Middle East, but also throughout Eurasia, with Indo-European expansion to Anatolia, Europe and Central Asia. The...
). The name of the city derives from the Celtic term Dunum, meaning "fortified city". It fell to Rome
Roman Republic
The Roman Republic was the period of the ancient Roman civilization where the government operated as a republic. It began with the overthrow of the Roman monarchy, traditionally dated around 508 BC, and its replacement by a government headed by two consuls, elected annually by the citizens and...
in 58 BC, when Roman legions
Roman army
The Roman army is the generic term for the terrestrial armed forces deployed by the kingdom of Rome , the Roman Republic , the Roman Empire and its successor, the Byzantine empire...
conquered almost all of Switzerland, and it soon became one of the main centres of Roman administration in the region.

The Romans were driven out of Thun, and out of the rest of Switzerland, by the Burgundians
Burgundians
The Burgundians were an East Germanic tribe which may have emigrated from mainland Scandinavia to the island of Bornholm, whose old form in Old Norse still was Burgundarholmr , and from there to mainland Europe...
around 400 AD. The Aar became the frontier between the Christian Burgundians and the Pagan, German-speaking Alemanni, who lived north. Thun was mentioned for the first time during the 7th century, in the chronicle of Frankish
Franks
The Franks were a confederation of Germanic tribes first attested in the third century AD as living north and east of the Lower Rhine River. From the third to fifth centuries some Franks raided Roman territory while other Franks joined the Roman troops in Gaul. Only the Salian Franks formed a...
monk Fredgar.

The region of Thun became a part of the Holy Roman Empire
Holy Roman Empire
The Holy Roman Empire was a realm that existed from 962 to 1806 in Central Europe.It was ruled by the Holy Roman Emperor. Its character changed during the Middle Ages and the Early Modern period, when the power of the emperor gradually weakened in favour of the princes...
in 1033, when Conrad II gained the title of King of Burgundy. The emperors entrusted the Zähringen
Zähringen
Zähringen is the name of an old German family that founded a large number of cities in what are today Switzerland and Baden-Württemberg. While the junior line that first assumed the title Duke of Zähringen, a cadet branch of the House of Baden, became extinct in 1218, the senior line persists and...
family, centred in Bern, with subduing the unruly nobles of central Switzerland. Around 1190 Duke Bertold V of Zähringen, built a castle in Thun and expanded the city. After Bertold's death in 1218, his territories went to Ulrich III von Kyburg.

In 1264 Thun received city rights and in 1384 the town was bought by the canton of Bern. Thun was the capital of the Oberland canton of the Helvetic Republic, which lasted from 1798 until 1803.

In 1819 a Military School was founded in the city, which later developed into the main military school in Switzerland. Thun was connected to the railway network of Switzerland in 1859 and telephone access made available in 1888. 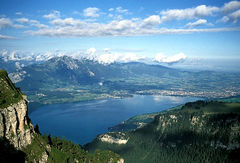