According to Appian
Appian
Appian of Alexandria was a Roman historian of Greek ethnicity who flourished during the reigns of Trajan, Hadrian, and Antoninus Pius.He was born ca. 95 in Alexandria. He tells us that, after having filled the chief offices in the province of Egypt, he went to Rome ca. 120, where he practised as...
the senator Cato the Elder
Cato the Elder
Marcus Porcius Cato was a Roman statesman, commonly referred to as Censorius , Sapiens , Priscus , or Major, Cato the Elder, or Cato the Censor, to distinguish him from his great-grandson, Cato the Younger.He came of an ancient Plebeian family who all were noted for some...
usually finished his speeches on any subject in the Senate with the phrase ceterum censeo Carthaginem esse delendam
Carthago delenda est
"Carthago delenda est" or the fuller "Ceterum censeo Carthaginem esse delendam" or "Ceterum autem censeo, Carthaginem esse delendam" are Latin political phrases which were popular in the Roman Republic during the latter years of the Punic Wars against Carthage...
, which means "Furthermore, it is my opinion that Carthage must be destroyed", a position earlier cited by Cicero
Cicero
Marcus Tullius Cicero , was a Roman philosopher, statesman, lawyer, political theorist, and Roman constitutionalist. He came from a wealthy municipal family of the equestrian order, and is widely considered one of Rome's greatest orators and prose stylists.He introduced the Romans to the chief...
in his dialogue De Senectute. He was opposed by the senator Publius Cornelius Scipio Nasica Corculum
Publius Cornelius Scipio Nasica Corculum
Publius Cornelius Scipio Nasica Corculum was a Roman statesman and member of the gens Cornelia.Corculum was the son of Publius Cornelius Scipio Nasica , and was thus a first cousin once removed of the Roman general Scipio Africanus...
, who favoured a different course, one that would not destroy Carthage, and who usually convinced the Senate.

The peace treaty at the end of the Second Punic War required that all border disputes involving Carthage be arbitrated by the Roman Senate
Roman Senate
The Senate of the Roman Republic was a political institution in the ancient Roman Republic, however, it was not an elected body, but one whose members were appointed by the consuls, and later by the censors. After a magistrate served his term in office, it usually was followed with automatic...
and required Carthage to get explicit Roman approval before going to war. As a result, in the fifty intervening years between the Second and Third Punic War, Carthage had to take all border disputes with Rome's ally Numidia
Numidia
Numidia was an ancient Berber kingdom in part of present-day Eastern Algeria and Western Tunisia in North Africa. It is known today as the Chawi-land, the land of the Chawi people , the direct descendants of the historical Numidians or the Massyles The kingdom began as a sovereign state and later...
to the Roman Senate, where they were decided almost exclusively in Numidian favor.

In 151 BC
151 BC
Year 151 BC was a year of the pre-Julian Roman calendar. At the time it was known as the Year of the Consulship of Lucullus and Albinus...
, the Carthaginian debt to Rome was fully repaid, meaning that, in Punic eyes, the treaty was now expired, though not so according to the Romans, who instead viewed the treaty as a permanent declaration of Carthaginian subordination to Rome akin to the Roman treaties with its Italian allies. Moreover, the retirement of the indemnity removed one of the main incentives the Romans had to keep the peace with Carthage - there were no further payments that might be interrupted.

The Romans had other reasons to conquer Carthage and her remaining territories. By the middle of the 2nd century BC, the population of the city of Rome was about 400,000 and rising. Feeding the growing populace was becoming a major challenge. The farmlands surrounding Carthage represented the most productive, most accessible and perhaps the most easily obtainable agricultural lands not yet under Roman control.


The course of war

In 151 BC Numidia launched another border raid on Carthaginian soil, besieging a town, and Carthage launched a large military expedition (25,000 soldiers) to repel the Numidian invaders. As a result, Carthage suffered a humiliating military defeat and was charged with another fifty year debt to Numidia. Immediately thereafter, however, Rome showed displeasure with Carthage’s decision to wage war against its neighbour without Roman consent, and told Carthage that in order to avoid a war it had to “satisfy the Roman People.”

In 149 BC, Rome declared war against Carthage. The Carthaginians made a series of attempts to appease Rome, and received a promise that if three hundred children of well-born Carthaginians were sent as hostages to Rome the Carthaginians would keep the rights to their land and self-government. Even after this was done, however, the allied city of Utica
Utica, Tunisia
Utica is an ancient city northwest of Carthage near the outflow of the Medjerda River into the Mediterranean Sea, traditionally considered to be the first colony founded by the Phoenicians in North Africa...
defected to Rome, and a Roman army of 80,000 men gathered there. The consul
Consul
Consul was the highest elected office of the Roman Republic and an appointive office under the Empire. The title was also used in other city states and also revived in modern states, notably in the First French Republic...
s then demanded that Carthage hand over all weapons and armour. After those had been handed over, Rome additionally demanded that the Carthaginians move at least ten miles inland, while the city itself was to be burned. When the Carthaginians learned of this they abandoned negotiations and the city was immediately besieged, beginning the Third Punic War.

The Carthaginians endured the siege
Battle of Carthage (c.149 BC)
The Battle of Carthage was the major act of the Third Punic War between the Phoenician city of Carthage in Africa and the Roman Republic...
starting c.149 BC to the spring of 146 BC, when Scipio Aemilianus took the city by storm. Though the Punic citizens fought valiantly, they were inevitably gradually pushed back by the overwhelming Roman military force and destroyed. 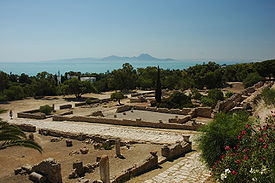 Many Carthaginians died from starvation
Starvation
Starvation is a severe deficiency in caloric energy, nutrient and vitamin intake. It is the most extreme form of malnutrition. In humans, prolonged starvation can cause permanent organ damage and eventually, death...
during the later part of the siege, while many others died in the final six days of fighting. When the war ended, the remaining 50,000 Carthaginians, a small part of the original pre-war population, were, as was the normal fate in antiquity of inhabitants of sacked cities, sold into slavery
Slavery in ancient Rome
The institution of slavery in ancient Rome played an important role in society and the Roman economy. Besides manual labor on farms and in mines, slaves performed many domestic services and a variety of other tasks, such as accounting...
by the victors. The city was systematically burned for somewhere between 10 and 17 days; the city walls, its buildings and its harbor were utterly destroyed.

The remaining Carthaginian territories were annexed by Rome and reconstituted to become the Roman province of Africa
Africa Province
The Roman province of Africa was established after the Romans defeated Carthage in the Third Punic War. It roughly comprised the territory of present-day northern Tunisia, and the small Mediterranean coast of modern-day western Libya along the Syrtis Minor...
. A century later, the site of Carthage was rebuilt as a Roman city by Julius Caesar
Julius Caesar
Gaius Julius Caesar was a Roman general and statesman and a distinguished writer of Latin prose. He played a critical role in the gradual transformation of the Roman Republic into the Roman Empire....
, and would later become one of the main cities of Roman Africa by the time of the Empire
Roman Empire
The Roman Empire was the post-Republican period of the ancient Roman civilization, characterised by an autocratic form of government and large territorial holdings in Europe and around the Mediterranean....
.

That Roman forces then sowed the city with salt
Salting the earth
Salting the earth, or sowing with salt, is the ritual of spreading salt on conquered cities to symbolize a curse on its re-inhabitation. It originated as a practice in the ancient Near East and became a well-established folkloric motif in the Middle Ages.-Destroying cities:The custom of purifying...
to ensure that nothing would grow there again is almost certainly a 19th century invention. Contemporary accounts show that the land surrounding Carthage was declared ager publicus
Ager publicus
The ager publicus is the Latin name for the public land of Ancient Rome. It was usually acquired by expropriation from Rome's enemies.In the earliest periods of Roman expansion in central Italy, the ager publicus was used for Roman and Latin colonies...
and that it was shared between local farmer
Farmer
A farmer is a person engaged in agriculture, who raises living organisms for food or raw materials, generally including livestock husbandry and growing crops, such as produce and grain...
s, and Roman and Italian
Italy
Italy , officially the Italian Republic languages]] under the European Charter for Regional or Minority Languages. In each of these, Italy's official name is as follows:;;;;;;;;), is a unitary parliamentary republic in South-Central Europe. To the north it borders France, Switzerland, Austria and...
ones. North Africa soon became a vital source of grain
Grain supply to the city of Rome
In classical antiquity, the grain supply to the city of Rome could not be met entirely from the surrounding countryside, which was taken up by the villas and parks of the aristocracy and which produced mainly fruit, vegetables and other perishable goods...
for the Romans. Roman Carthage was the main hub transporting these supplies to the capital. The fact that Rome came to rely on North African grain as quickly as she did after conquering Carthage makes any notion that she might have destroyed Carthaginian farmlands quite doubtful.

Numerous significant Carthaginian cities, such as those in Mauretania
Mauretania
Mauretania is a part of the historical Ancient Libyan land in North Africa. It corresponds to present day Morocco and a part of western Algeria...
, were taken over and rebuilt by the Romans. Examples of these rebuilt cities are Volubilis
Volubilis
Volubilis is an archaeological site in Morocco situated near Meknes between Fez and Rabat along the N13 road. The nearest town is Moulay Idriss. Volubilis features the best preserved Roman ruins in this part of northern Africa...
, Chellah
Chellah
Chellah, or Sala Colonia is a necropolis and complex of ancient Roman Mauretania Tingitana and medieval ruins at Rabat, Morocco. It is the most ancient human settlement on the mouth of the Bou Regreg River.-History:...
and Mogador. Volubilis, for example, was an important Roman town situated near the westernmost border of Roman conquests. It was built on the site of the previous Carthaginian settlement, but that settlement overlies an earlier neolithic
Neolithic
The Neolithic Age, Era, or Period, or New Stone Age, was a period in the development of human technology, beginning about 9500 BC in some parts of the Middle East, and later in other parts of the world. It is traditionally considered as the last part of the Stone Age...
habitation. Utica, the Punic city which changed loyalties at the beginning of the siege, became the capital of the Roman province of Africa
Africa Province
The Roman province of Africa was established after the Romans defeated Carthage in the Third Punic War. It roughly comprised the territory of present-day northern Tunisia, and the small Mediterranean coast of modern-day western Libya along the Syrtis Minor...
.

In January 1985, Ugo Vetere, the mayor of Rome, and Chedly Klibi, the mayor of Carthage, signed a symbolic friendship and collaboration pact, "officially" ending the conflict between their cities.