Encyclopedia
Volubilis is an archaeological site in Morocco
Morocco
Morocco , officially the Kingdom of Morocco , is a country located in North Africa. It has a population of more than 32 million and an area of 710,850 km², and also primarily administers the disputed region of the Western Sahara...
situated near Meknes
Meknes
Meknes is a city in northern Morocco, located from the capital Rabat and from Fes. It is served by the A2 expressway between those two cities and by the corresponding railway. Meknes was the capital of Morocco under the reign of Moulay Ismail , before it was relocated to Marrakech. The...
between Fez and Rabat
Rabat
Rabat , is the capital and third largest city of the Kingdom of Morocco with a population of approximately 650,000...
along the N13 road
N13 road (Morocco)
The N13 road is a national motorway in Morocco which connects Azrou and points south with Meknes and northerly locations. North of Meknes there are views of the Zerhoun Mountains. Along the N13 with a view of the Zerhoun Mountains is the ancient Roman and Carthaginian settlement of Volubilis,...
. The nearest town is Moulay Idriss
Moulay Idriss
Moulay Idriss or Moulay Idriss Zerhoun , a town in northern Morocco located at, is named after Moulay Idris I, the founder of the Idrisid Dynasty. Moulay is a term roughly equivalent to "Prince" or "Lord". Idris founded both Fez and the city that bears his name. His tomb, located in Moulay Idriss,...
. Volubilis features the best preserved Roman ruins
Ruins
Ruins are the remains of human-made architecture: structures that were once complete, as time went by, have fallen into a state of partial or complete disrepair, due to lack of maintenance or deliberate acts of destruction...
in this part of northern Africa
Africa
Africa is the world's second largest and second most populous continent, after Asia. At about 30.2 million km² including adjacent islands, it covers 6% of the Earth's total surface area and 20.4% of the total land area...
. In 1997 the site was listed as a UNESCO
UNESCO
The United Nations Educational, Scientific and Cultural Organization is a specialized agency of the United Nations...
World Heritage site.

In antiquity, Volubilis was an important Roman town situated near the westernmost border of Roman conquests. It was built on the site of a previous Carthaginian settlement from (at the latest) the third century BC, but that settlement overlies an earlier neolithic
Neolithic
The Neolithic Age, Era, or Period, or New Stone Age, was a period in the development of human technology, beginning about 9500 BC in some parts of the Middle East, and later in other parts of the world. It is traditionally considered as the last part of the Stone Age...
habitation.

Volubilis was the administrative center of the province in Roman Africa
Africa
Africa is the world's second largest and second most populous continent, after Asia. At about 30.2 million km² including adjacent islands, it covers 6% of the Earth's total surface area and 20.4% of the total land area...
called Mauretania Tingitana
Mauretania Tingitana
Mauretania Tingitana was a Roman province located in northwestern Africa, coinciding roughly with the northern part of present-day Morocco. The province extended from the northern peninsula, opposite Gibraltar, to Chellah and Volubilis to the south, and as far east as the Oued Laou river. Its...
. The fertile lands of the province produced many commodities such as grain and olive oil, which were exported to Rome, contributing to the province's wealth and prosperity. Archaeology has documented the presence of a Jewish community in the Roman period. 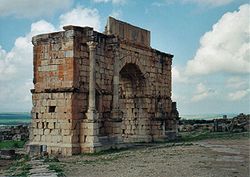 The Romans evacuated most of Morocco at the end of the 3rd century AD, but unlike some other Roman cities, Volubilis was not abandoned. However, it appears to have been destroyed by an earthquake in the late fourth century AD. It was reoccupied in the sixth century, when a small group of tombstones written in Latin shows the existence of a community
Community
The term community has two distinct meanings:*a group of interacting people, possibly living in close proximity, and often refers to a group that shares some common values, and is attributed with social cohesion within a shared geographical location, generally in social units larger than a household...
that still dated its foundation by the year of the Roman province. Coins show that it was occupied under the Abbasids: a number of these simply bear the name Walila. Walili comes from the Berber language alili which means a plant widely found in this region. Awraba was a Berber tribe that settled there. Volubillis was a second capital of the king Juba II who was the son of the Berber king Juba I.

The texts referring to the arrival of Idris I
Idris I
Idris I was the first ruler and founder of the Idrisid Dynasty, ruling from 788 to 791 AD. He is credited with founding the dynasty that was instrumental in the early Islamization of Morocco.-History:...
in 788 show that the town was at that point in the control of the Awraba tribe, who welcomed the descendant of Ali, and declared him imam shortly thereafter. Within three years he had consolidated his hold on much of the area, founded the first settlement at Fez, and started minting coins. He died in 791, leaving a pregnant Awraba wife, Kenza, and his faithful slave, Rashid, who acted as regent until the majority of Idris II. At this point the court departed for Fez, leaving the Awraba in control of the town.

The local Latin language
African Romance
African Romance or African Latin is an extinct Romance language that is supposed to have been spoken in the Roman province of Africa during the later Roman and early Byzantine Empires, prior to the annexation of the region by the Umayyad Caliphate in 696...
survived for centuries, and was not replaced before the Arabs conquered North Africa in the late 7th century.

People continued to live in Volubilis for more than 1,000 years more. Volubilis was first abandoned in the 18th century -- when it was demolished in order to provide for building materials for the construction of the palaces of Moulay Ismail in nearby Meknes. If that destruction had not occurred, Volubilis could have become one of the best preserved Roman sites anywhere.

Volubilis' structures were damaged by the 1755 Lisbon earthquake
1755 Lisbon earthquake
The 1755 Lisbon earthquake, also known as the Great Lisbon Earthquake, was a megathrust earthquake that took place on Saturday 1 November 1755, at around 9:40 in the morning. The earthquake was followed by fires and a tsunami, which almost totally destroyed Lisbon in the Kingdom of Portugal, and...
, while in the 18th century part of the marble was taken for constructions in nearby Meknes
Meknes
Meknes is a city in northern Morocco, located from the capital Rabat and from Fes. It is served by the A2 expressway between those two cities and by the corresponding railway. Meknes was the capital of Morocco under the reign of Moulay Ismail , before it was relocated to Marrakech. The...
.

In 1915, archaeological excavation was begun there by the French and it continued through into the 1920s. Extensive remains of the Roman town have been uncovered. From 2000 excavations carried out by University College London
University College London
University College London is a public research university located in London, United Kingdom and the oldest and largest constituent college of the federal University of London...
and the Moroccan Institut National des Sciences de l’Archéologie et du Patrimoine under the direction of Elizabeth Fentress
Elizabeth Fentress
Elizabeth Barringer Fentress is a Roman archaeologist who specialises in Italy and North Africa.- Biography :Fentress was educated at the University of Pennsylvania , University College London , St Hugh's College, Oxford Elizabeth Barringer Fentress (born 30 October 1948) is a Roman archaeologist...
, Gaetano Palumbo and Hassan Limane revealed what should probably be interpreted as the headquarters of Idris I
Idris I
Idris I was the first ruler and founder of the Idrisid Dynasty, ruling from 788 to 791 AD. He is credited with founding the dynasty that was instrumental in the early Islamization of Morocco.-History:...
just below the walls of the Roman town to the west. Excavations within the walls also revealed a section of the early medieval town. Today, a high percentage of artifacts found at Volubilis are on display in the Rabat Archaeological Museum
Rabat Archaeological Museum
Rabat Archaeological Museum is an archaeological museum in Rabat, Morocco. Opened in 1932, it contains the most extensive collection of archaeological artifacts found in Morocco...
.