Thiocyanate is analogous to the cyanate
Cyanate
The cyanate ion is an anion with the chemical formula written as [OCN]− or [NCO]−. In aqueous solution it acts as a base, forming isocyanic acid, HNCO. The cyanate ion is an ambidentate ligand, forming complexes with a metal ion in which either the nitrogen or oxygen atom may be the electron-pair...
ion, [OCN]−, wherein oxygen
Oxygen
Oxygen is the element with atomic number 8 and represented by the symbol O. Its name derives from the Greek roots ὀξύς and -γενής , because at the time of naming, it was mistakenly thought that all acids required oxygen in their composition...
is replaced by sulfur
Sulfur
Sulfur or sulphur is the chemical element with atomic number 16. In the periodic table it is represented by the symbol S. It is an abundant, multivalent non-metal. Under normal conditions, sulfur atoms form cyclic octatomic molecules with chemical formula S8. Elemental sulfur is a bright yellow...
. [SCN]− is one of the pseudohalide
Pseudohalogen
Pseudo'halogen molecules are inorganic molecules of the general formsPs–Ps or Ps–X, where Ps is a pseudohalogen group such as cyanide, cyanate, thiocyanate and others, and X is a "true" halogen...
s, due to the similarity of its reactions to that of halide
Halide
A halide is a binary compound, of which one part is a halogen atom and the other part is an element or radical that is less electronegative than the halogen, to make a fluoride, chloride, bromide, iodide, or astatide compound. Many salts are halides...
ions. Thiocyanate used to be known as rhodanide (from a Greek
Greek language
Greek is an independent branch of the Indo-European family of languages. Native to the southern Balkans, it has the longest documented history of any Indo-European language, spanning 34 centuries of written records. Its writing system has been the Greek alphabet for the majority of its history;...
word for rose
Rose
A rose is a woody perennial of the genus Rosa, within the family Rosaceae. There are over 100 species. They form a group of erect shrubs, and climbing or trailing plants, with stems that are often armed with sharp prickles. Flowers are large and showy, in colours ranging from white through yellows...
) because of the red colour of its complexes with iron
Iron
Iron is a chemical element with the symbol Fe and atomic number 26. It is a metal in the first transition series. It is the most common element forming the planet Earth as a whole, forming much of Earth's outer and inner core. It is the fourth most common element in the Earth's crust...
. Thiocyanate is produced by the reaction of elemental sulfur or thiosulfate
Thiosulfate
Thiosulfate is an oxyanion of sulfur. The prefix thio indicates that thiosulfate ion is a sulfate ion with one oxygen replaced by a sulfur. Thiosulfate occurs naturally and is produced by certain biochemical processes...
with cyanide
Cyanide
A cyanide is a chemical compound that contains the cyano group, -C≡N, which consists of a carbon atom triple-bonded to a nitrogen atom. Cyanides most commonly refer to salts of the anion CN−. Most cyanides are highly toxic....
:


The second reaction is catalyzed by the enzyme sulfotransferase
Sulfotransferase
Sulfotransferases are transferase enzymes that catalyze the transfer of a sulfate group from a donor molecule to an acceptor alcohol or amine. The most common sulfate donor is 3'-phosphoadenosine-5'-phosphosulfate...
known as rhodanase
Rhodanase
Rhodanese is a mitochondrial enzyme that detoxifies cyanide by converting it to thiocyanate .This reaction takes place in two steps. The diagram on the right shows the crystallographically-determined structure of rhodanese. In the first step, thiosulfate reacts with the thiol group on Cysteine-247...
and may be relevant to detoxification of cyanide in the body.

Organic and transition metal derivatives of the thiocyanate ion can exist as "linkage isomers." In thiocyanates, the organic group (or metal ion) is attached to sulfur: R−S−C≡N has a S-C single bond and a C-N triple bond. In isothiocyanate
Isothiocyanate
Isothiocyanate is the chemical group –N=C=S, formed by substituting sulfur for oxygen in the isocyanate group. Many natural isothiocyanates from plants are produced by enzymatic conversion of metabolites called glucosinolates. These natural isothiocyanates, such as allyl isothiocyanate, are also...
s, the substituent
Substituent
In organic chemistry and biochemistry, a substituent is an atom or group of atoms substituted in place of a hydrogen atom on the parent chain of a hydrocarbon...
is attached to nitrogen: R−N=C=S has a S-C double bond and a C-N double bond: 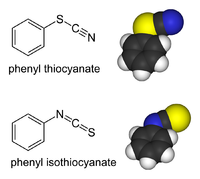 If [SCN]− is added to a solution containing iron (III) ions
Ferric
Ferric refers to iron-containing materials or compounds. In chemistry the term is reserved for iron with an oxidation number of +3, also denoted iron or Fe3+. On the other hand, ferrous refers to iron with oxidation number of +2, denoted iron or Fe2+...
(Fe3+), a blood red solution is formed due to the formation of [Fe(NCS)(H2O)5]2+
Thiocyanatoiron
Thiocyanatoiron is a complex ion with the chemical formula [FeSCN]2+. It is known to produce a blood red color in solution. This is used as a test for Fe3+ in the laboratory...
.

Biological chemistry of thiocyanate in medicine

Thiocyanate is a metabolite
Metabolite
Metabolites are the intermediates and products of metabolism. The term metabolite is usually restricted to small molecules. A primary metabolite is directly involved in normal growth, development, and reproduction. Alcohol is an example of a primary metabolite produced in large-scale by industrial...
of sodium nitroprusside
Sodium nitroprusside
Sodium nitroprusside is the inorganic compound with the formula Na2[Fe5NO]·2H2O. This red-coloured salt, which is often abbreviated SNP, is a potent vasodilator...
, after rhodanese catalyses its reaction with thiosulfate
Sodium thiosulfate
Sodium thiosulfate , also spelled sodium thiosulphate, is a colorless crystalline compound that is more familiar as the pentahydrate, Na2S2O3•5H2O, an efflorescent, monoclinic crystalline substance also called sodium hyposulfite or “hypo.”...
.
The source of this article is wikipedia, the free encyclopedia.  The text of this article is licensed under the GFDL.