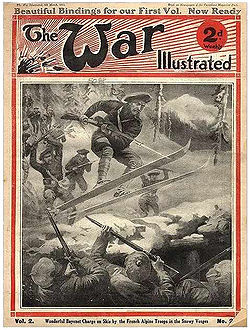 The War Illustrated was a British war magazine published in London
London
London is the capital city of :England and the :United Kingdom, the largest metropolitan area in the United Kingdom, and the largest urban zone in the European Union by most measures. Located on the River Thames, London has been a major settlement for two millennia, its history going back to its...
by William Berry
William Berry, 1st Viscount Camrose
William Ewart Berry, 1st Viscount Camrose was a British newspaper publisher.The second of three brothers born in Merthyr Tydfil in Wales, Berry started his working life as a journalist and established his own paper, Advertising World, in 1901...
(later Viscount Camrose
Viscount Camrose
Viscount Camrose, of Hackwood Park in the County of Southampton, is a title in the Peerage of the United Kingdom. It was created on 20 January 1941 for the prominent newspaper magnate William Berry, 1st Baron Camrose...
and owner of The Daily Telegraph
The Daily Telegraph
The Daily Telegraph is a daily morning broadsheet newspaper distributed throughout the United Kingdom and internationally. The newspaper was founded by Arthur B...
). It was first released on 22 August 1914, eighteen days after the United Kingdom declared war on Germany, and regular issues continued throughout World War I
World War I
World War I , which was predominantly called the World War or the Great War from its occurrence until 1939, and the First World War or World War I thereafter, was a major war centred in Europe that began on 28 July 1914 and lasted until 11 November 1918...
. The magazine was discontinued after the 8 February 1919 issue, but returned 16 September 1939 following the start of World War II
World War II
World War II, or the Second World War , was a global conflict lasting from 1939 to 1945, involving most of the world's nations—including all of the great powers—eventually forming two opposing military alliances: the Allies and the Axis...
. 255 issues were published over the course of the Second World War before the magazine permanently ceased production on 11 April 1947.

Subtitled "A Pictorial Record of the Conflict of the Nation", The War Illustrated was at first sensationalistic and patriotic. Although it contained articles, the main focus was on photographs and illustrations, most notably those of Stanley Wood dramatising (or in some cases fabricating) events involving German troops. The magazine became more diligent in properly verifying its reports from 1916 onwards.

Both versions of The War Illustrated were edited by John Hammerton, who also contributed articles throughout the magazine's run. The magazine contained personal accounts of the war by war correspondent
War correspondent
A war correspondent is a journalist who covers stories firsthand from a war zone. In the 19th century they were also called Special Correspondents.-Methods:...
s such as Hamilton Fyfe
Hamilton Fyfe
Henry Hamilton Fyfe was a British journalist and writer who served as editor of both the Daily Mirror and the Daily Herald.-Career:...
and Luigi Barzini, Sr.
Luigi Barzini, Sr.
Luigi Barzini Sr was an Italian journalist, war correspondent and fascist politician.-Biography:Born at Orvieto, Barzini started his career as a journalist in 1898, working for minor Italian magazines and was almost immediately noticed and hired by Luigi Albertini, then director of the Corriere...
, descriptions and illustrations of Victoria Cross
Victoria Cross
The Victoria Cross is the highest military decoration awarded for valour "in the face of the enemy" to members of the armed forces of various Commonwealth countries, and previous British Empire territories....
actions (for example those of John Lynn
John Lynn
John Lynn VC DCM was an English recipient of the Victoria Cross, the highest and most prestigious award for gallantry in the face of the enemy that can be awarded to British and Commonwealth forces....
and John George Smyth
John George Smyth
Brigadier Sir John George Smyth, 1st Baronet, VC MC PC was a British Indian Army officer and Conservative Member of Parliament. Although a recipient of the Victoria Cross, his army career ended in controversy....
) and articles by authors such as H. G. Wells
H. G. Wells
Herbert George Wells was an English author, now best known for his work in the science fiction genre. He was also a prolific writer in many other genres, including contemporary novels, history, politics and social commentary, even writing text books and rules for war games...
("Will The War Change England?") and Winston Churchill
Winston Churchill
Sir Winston Leonard Spencer-Churchill, was a predominantly Conservative British politician and statesman known for his leadership of the United Kingdom during the Second World War. He is widely regarded as one of the greatest wartime leaders of the century and served as Prime Minister twice...
("The Right View of Verdun"). It was extremely popular: at its peak at the end of World War I, The War Illustrated had a circulation of 750,000.