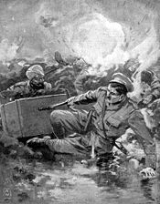 "Jackie" Smyth was educated at Dragon School
Dragon School
The Dragon School is a British coeducational, preparatory school in the city of Oxford, founded in 1877 as the Oxford Preparatory School, or OPS. It is primarily known as a boarding school, although it also takes day pupils...
, Repton
Repton School
Repton School, founded in 1557, is a co-educational English independent school for both day and boarding pupils, in the British public school tradition, located in the village of Repton, in Derbyshire, in the Midlands area of England...
and the Royal Military College, Sandhurst. He was 21 years old, and a lieutenant in the 15th Ludhiana Sikhs
15th Ludhiana Sikhs
The 15th Ludhiana Sikhs was an infantry regiment in the British Indian Army. They could trace their origins to 1846, when they were known as the Regiment of Ludhiana. During the Indian Mutiny they were relied upon to hold Benares throughout the period of the Mutiny...
, 3rd (Lahore) Division
3rd (Lahore) Division
The 3rd Division was an infantry division of the British Indian Army, first organised in 1852. It saw service during World War I as part of the Indian Corps in France before being moved to the Middle East where it fought against troops of the Ottoman Empire.-Pre-Mutiny:The Lahore Division first...
, Indian Army during the First World War.

In June 1915 Smyth was awarded the Victoria Cross
Victoria Cross
The Victoria Cross is the highest military decoration awarded for valour "in the face of the enemy" to members of the armed forces of various Commonwealth countries, and previous British Empire territories....
, the United Kingdom's highest award for bravery in combat. The citation for this award, published in the London Gazette
London Gazette
The London Gazette is one of the official journals of record of the British government, and the most important among such official journals in the United Kingdom, in which certain statutory notices are required to be published...
read:

In September 1920, when brigade major in the 43rd Indian Infantry Brigade, Smyth was awarded the MC for distinguished service in the field in Waziristan
Waziristan
Waziristan is a mountainous region near the Northwest of Pakistan, bordering Afghanistan and covering some 11,585 km² . The area is entirely populated by ethnic Pashtuns . The language spoken in the valley is Pashto/Pakhto...
. The citation for this award, published in the London Gazette
London Gazette
The London Gazette is one of the official journals of record of the British government, and the most important among such official journals in the United Kingdom, in which certain statutory notices are required to be published...
, read:

An early appointment as an instructor at the Staff College in Camberley in 1930 indicated that Smyth's career was on the fast track. He managed to persuade the CIGS to give him an undertaking that he would be given a brigade to command in the UK should hostilities break out. Having managed to engineer leave from India to the UK in summer 1939, he called in his debt but was disappointed to be seconded to a UK-based staff job.

In February 1940, after further lobbying, Smyth was appointed to command the 127th Infantry Brigade which from April he led in France as part of the British Expeditionary Force. After evacuation from Dunkirk, he continued to command the brigade in Britain until he was summoned to return to India in March 1941. After briefly commanding Indian 36th Infantry brigade in Quetta and a period of sick leave, Smyth took command of Indian 19th Infantry Division  as an acting major-general in October but was re-assigned to command Indian 17th Infantry Division in December. Controversy surrounds his handling of 17th Indian Division in February 1942 during its retreat across the Sittang river
Battle of Sittang Bridge
The Battle of Sittang Bridge was part of the Burma campaign in World War II. Fought between 19 February and 23 February 1942, the battle was a decisive victory for Japan, with heavy losses for the British Indian Army, which was forced to retreat in disarray...
in Burma
Burma Campaign
The Burma Campaign in the South-East Asian Theatre of World War II was fought primarily between British Commonwealth, Chinese and United States forces against the forces of the Empire of Japan, Thailand, and the Indian National Army. British Commonwealth land forces were drawn primarily from...
.It was said that he failed to expedite a strong bridgehead on the enemy's side of the river and was forced, when it came under threat from the Japanese, to order the blowing of the bridge while two-thirds of his division were still on the far side with no other means of crossing the river and therefore dooming them. 17th Division were the only formation standing between the Japanese and Rangoon and this loss therefore led directly to the loss of Rangoon and Lower Burma. The Commander-in-Chief, India
Commander-in-Chief, India
During the period of the British Raj, the Commander-in-Chief, India was the supreme commander of the Indian Army. The Commander-in-Chief and most of his staff were based at General Headquarters, India, and liaised with the civilian Governor-General of India...
, General Sir Archibald Wavell was furious and sacked Smyth on the spot. Smyth received no further posts and returned to the United Kingdom to retire with a substantive rank of colonel and honorary rank of brigadier. It took 16 years and revision of the Official History before his version of the affair versus that of General Hutton, his corps commander, was clarified. Smyth's book 'Milestones' 1979 gives his version in which he relates that he had made representations to General Hutton 10 days previously recommending a withdrawal to the West bank of the Sittang River thus permitting a strong defence line to be established. His recommendation was refused.

Smyth went into politics and stood unsuccessfully against Ernest Bevin
Ernest Bevin
Ernest Bevin was a British trade union leader and Labour politician. He served as general secretary of the powerful Transport and General Workers' Union from 1922 to 1945, as Minister of Labour in the war-time coalition government, and as Foreign Secretary in the post-war Labour Government.-Early...
in Wandsworth
Wandsworth
Wandsworth is a district of south London, England, in the London Borough of Wandsworth. It is situated southwest of Charing Cross. The area is identified in the London Plan as one of 35 major centres in Greater London.-Toponymy:...
at the 1945 general election
United Kingdom general election, 1945
The United Kingdom general election of 1945 was a general election held on 5 July 1945, with polls in some constituencies delayed until 12 July and in Nelson and Colne until 19 July, due to local wakes weeks. The results were counted and declared on 26 July, due in part to the time it took to...
. At the 1950 election
United Kingdom general election, 1950
The 1950 United Kingdom general election was the first general election ever after a full term of a Labour government. Despite polling over one and a half million votes more than the Conservatives, the election, held on 23 February 1950 resulted in Labour receiving a slim majority of just five...
, he defeated the sitting Labour
Labour Party (UK)
The Labour Party is a centre-left democratic socialist party in the United Kingdom. It surpassed the Liberal Party in general elections during the early 1920s, forming minority governments under Ramsay MacDonald in 1924 and 1929-1931. The party was in a wartime coalition from 1940 to 1945, after...
MP for Norwood
Norwood (UK Parliament constituency)
Norwood was a parliamentary constituency in South London which returned one Member of Parliament to the House of Commons of the Parliament of the United Kingdom by the first past the post system.-History:...
. He was made a baronet
Baronet
A baronet or the rare female equivalent, a baronetess , is the holder of a hereditary baronetcy awarded by the British Crown...
23 January 1956 with the style Sir John George Smyth, VC, MC, 1st Baronet Smyth of Teignmouth in the County of Devon and a Privy Counsellor in 1962.

Smyth was also an author, a playwright, a journalist and a broadcaster. His two brothers were distinguished soldiers, one of whom also became a Brigadier. He married twice: firstly Margaret Dundas on 22 July 1920, later dissolved, with whom he had three sons and a daughter; and then Frances Read on 12 April 1940. One of his sons, Capt. John Lawrence Smyth, 1st Battalion, The Queen's Royal Regiment (West Surrey), was killed on 7 May 1944, during the first attack on Jail Hill at the Battle of Kohima
Battle of Kohima
The Battle of Kohima was the turning point of the Japanese U Go offensive into India in 1944 in the Second World War. The battle was fought from 4 April to 22 June 1944 around the town of Kohima in northeast India. It is often referred to as the "Stalingrad of the East".The battle took place in...
.

Smyth was cremated at Golders Green
Golders Green
Golders Green is an area in the London Borough of Barnet in London, England. Although having some earlier history, it is essentially a 19th century suburban development situated about 5.3 miles north west of Charing Cross and centred on the crossroads of Golders Green Road and Finchley Road.In the...
cemetery. His Victoria Cross is displayed at the Imperial War Museum
Imperial War Museum
Imperial War Museum is a British national museum organisation with branches at five locations in England, three of which are in London. The museum was founded during the First World War in 1917 and intended as a record of the war effort and sacrifice of Britain and her Empire...
.