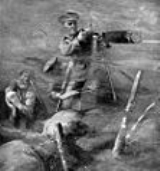 He was about 28 years old, and a private
Private (rank)
A Private is a soldier of the lowest military rank .In modern military parlance, 'Private' is shortened to 'Pte' in the United Kingdom and other Commonwealth countries and to 'Pvt.' in the United States.Notably both Sir Fitzroy MacLean and Enoch Powell are examples of, rare, rapid career...
in the 2nd Battalion, The Lancashire Fusiliers, British Army
British Army
The British Army is the land warfare branch of Her Majesty's Armed Forces in the United Kingdom. It came into being with the unification of the Kingdom of England and Scotland into the Kingdom of Great Britain in 1707. The new British Army incorporated Regiments that had already existed in England...
during the First World War when the following deed took place for which he was awarded the VC.

On 2 May 1915 near Ypres
Ypres
Ypres is a Belgian municipality located in the Flemish province of West Flanders. The municipality comprises the city of Ypres and the villages of Boezinge, Brielen, Dikkebus, Elverdinge, Hollebeke, Sint-Jan, Vlamertinge, Voormezele, Zillebeke, and Zuidschote...
, Belgium
Belgium
Belgium , officially the Kingdom of Belgium, is a federal state in Western Europe. It is a founding member of the European Union and hosts the EU's headquarters, and those of several other major international organisations such as NATO.Belgium is also a member of, or affiliated to, many...
, when the Germans were advancing behind their wave of asphyxiating gas, Private Lynn, although almost overcome by the deadly fumes, handled his machine-gun with great effect against the enemy, and when he could not see them, he moved his gun higher up the parapet so that he could fire more effectively. This eventually checked any further advance and the outstanding courage displayed by this soldier had a great effect upon his comrades in the very trying circumstances. Private Lynn died later from the effects of gas poisoning.

Lynn was also awarded the Cross of the Order of St. George, 4th Class (Russia).

His Victoria Cross is displayed at the Fusilier Museum, Bury, Lancashire
Lancashire
Lancashire is a non-metropolitan county of historic origin in the North West of England. It takes its name from the city of Lancaster, and is sometimes known as the County of Lancaster. Although Lancaster is still considered to be the county town, Lancashire County Council is based in Preston...
.
The source of this article is wikipedia, the free encyclopedia.  The text of this article is licensed under the GFDL.