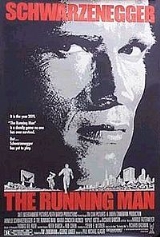 Encyclopedia
The Running Man is a 1987 American action film
Action film
Action film is a film genre where one or more heroes is thrust into a series of challenges that require physical feats, extended fights and frenetic chases...
loosely based on Stephen King
Stephen King
Stephen Edwin King is an American author of contemporary horror, suspense, science fiction and fantasy fiction. His books have sold more than 350 million copies and have been adapted into a number of feature films, television movies and comic books...
's 1982 novel
The Running Man
The Running Man is a science fiction novel by Stephen King, first published under the pseudonym Richard Bachman in 1982 as a paperback original. It was collected in 1985 in the hardcover omnibus The Bachman Books...
of the same name. Directed by Paul Michael Glaser
Paul Michael Glaser
Paul Michael Glaser is an American actor and director, perhaps best known for his role as Detective David Starsky on the 1970s television series Starsky and Hutch; he also appeared as Captain Jack Steeper on the 1999 to 2005 NBC series Third Watch.-Early life:Glaser, the youngest of three...
, the film stars Arnold Schwarzenegger
Arnold Schwarzenegger
Arnold Alois Schwarzenegger is an Austrian-American former professional bodybuilder, actor, businessman, investor, and politician. Schwarzenegger served as the 38th Governor of California from 2003 until 2011....
, María Conchita Alonso
Maria Conchita Alonso
María Conchita Alonso , better known as María Conchita, is a Venezuelan Grammy Award-nominated singer and actress.- Early life :...
, Jesse Ventura
Jesse Ventura
James George Janos , better known as Jesse Ventura, is an American politician, the 38th Governor of Minnesota from 1999 to 2003, Navy UDT veteran, former SEAL reservist, actor, and former radio and television talk show host...
, Jim Brown
Jim Brown
James Nathaniel "Jim" Brown is an American former professional football player who has also made his mark as an actor. He is best known for his exceptional and record-setting nine-year career as a running back for the NFL Cleveland Browns from 1957 to 1965. In 2002, he was named by Sporting News...
, and Richard Dawson.

The film, set in a dystopia
Dystopia
A dystopia is the idea of a society in a repressive and controlled state, often under the guise of being utopian, as characterized in books like Brave New World and Nineteen Eighty-Four...
n America in the year 2019, is about a television show called The Running Man, where convicted criminal "runners" must escape death at the hands of professional killers. The Running Man bears some similarity to "Das Millionenspiel", a fictional German reality show (1970), which is itself based on the novel The Prize of Peril by Robert Sheckley
Robert Sheckley
Robert Sheckley was a Hugo- and Nebula-nominated American author. First published in the science fiction magazines of the 1950s, his numerous quick-witted stories and novels were famously unpredictable, absurdist and broadly comical.Sheckley was named Author Emeritus by the Science Fiction and...
.

By 2017, the global economy has collapsed and American society has become a totalitarian police state
Police state
A police state is one in which the government exercises rigid and repressive controls over the social, economic and political life of the population...
, censoring
Censorship
thumb|[[Book burning]] following the [[1973 Chilean coup d'état|1973 coup]] that installed the [[Military government of Chile |Pinochet regime]] in Chile...
all cultural activity
Culture
Culture is a term that has many different inter-related meanings. For example, in 1952, Alfred Kroeber and Clyde Kluckhohn compiled a list of 164 definitions of "culture" in Culture: A Critical Review of Concepts and Definitions...
. The government pacifies the populace by broadcasting a number of game shows in which convicted criminals fight for their lives, including the gladiator
Gladiator
A gladiator was an armed combatant who entertained audiences in the Roman Republic and Roman Empire in violent confrontations with other gladiators, wild animals, and condemned criminals. Some gladiators were volunteers who risked their legal and social standing and their lives by appearing in the...
-style The Running Man, hosted by the ruthless Damon Killian, where “runners” attempt to evade “stalkers” and certain death for a chance to be pardoned and set free.

Two years later Ben Richards, a military pilot who was convicted of a massacre he actually refused to participate in, escapes from a labor camp
Labor camp
A labor camp is a simplified detention facility where inmates are forced to engage in penal labor. Labor camps have many common aspects with slavery and with prisons...
with other inmates and flees to a shanty town
Shanty town
A shanty town is a slum settlement of impoverished people who live in improvised dwellings made from scrap materials: often plywood, corrugated metal and sheets of plastic...
on the outskirts of Los Angeles
Los Ángeles
Los Ángeles is the capital of the province of Biobío, in the commune of the same name, in Region VIII , in the center-south of Chile. It is located between the Laja and Biobío rivers. The population is 123,445 inhabitants...
. Declining an offer to join a resistance movement, Richards instead seeks shelter at his brother's apartment. He finds it is now occupied by Amber Mendez, a composer for ICS, the network that broadcasts The Running Man. Richards attempts to flee to Hawaii
Hawaii
Hawaii is the newest of the 50 U.S. states , and is the only U.S. state made up entirely of islands. It is the northernmost island group in Polynesia, occupying most of an archipelago in the central Pacific Ocean, southwest of the continental United States, southeast of Japan, and northeast of...
with Amber as a hostage, but she alerts airport security and Richards is captured and taken to the ICS studios. Killian coerces him to compete in The Running Man with the threat that if he declines, his two weaker escapee friends—Laughlin and Weiss—will be put on the show instead. Richards complies, but as the show begins, Killian reveals that Laughlin and Weiss have been enrolled as runners anyway. Richards and his friends are attacked by the first stalker, Subzero, who is eventually killed by Richards and Laughlin, shocking the show's audience. While continuing to evade the barbaric stalkers, Laughlin and Weiss search for the network's uplink
Earth station
A ground station, earth station, or earth terminal is a terrestrial terminal station designed for extraplanetary telecommunication with spacecraft, and/or reception of radio waves from an astronomical radio source. Ground stations are located either on the surface of the Earth, or within Earth's...
facilities, which they know are within the game zone.

Meanwhile, Amber begins to question the media's veracity after watching a falsified news report on Richards' capture. Amber discovers the truth about the massacre, but she is captured and subsequently sent into the game zone, where she encounters Richards and the others. The runners split up, each pair pursued by a different stalker. Laughlin is mortally wounded by the stalker Buzzsaw, who Richards subsequently kills. Weiss and Amber are successful in locating the uplink system and learning the access codes, but Weiss is electrocuted by the stalker Dynamo. Amber's screams lead Richards to her, and as the two evade the stalker, Dynamo's buggy flips, trapping him inside. Richards then stuns the audience by merely pinning Dynamo in the vehicle, proclaiming that he will not kill a helpless man.

Amber and Richards return to Laughlin, who reveals that the resistance has a hideout within the game zone before finally dying. Back at the ICS studio, Killian sees Richards' popularity growing, with viewers betting for Richards to win when they are supposed to bet only on the stalkers. Off-camera, Killian offers Richards a job as a stalker, which he furiously declines. As the next stalker, Fireball, pursues Amber and Richards into an abandoned factory, Amber inadvertently finds the charred bodies of the previous season's "winning" (and, supposedly, pardoned) runners. Fireball attempts to kill Amber, but Richards rescues her and kills Fireball with his own weaponry. Running out of options, a frustrated Killian uses computer-generated imagery
Computer-generated imagery
Computer-generated imagery is the application of the field of computer graphics or, more specifically, 3D computer graphics to special effects in art, video games, films, television programs, commercials, simulators and simulation generally, and printed media...
to fake the deaths of Richards and Amber in the final match of the episode, a falsified battle against retired stalker Captain Freedom.

In the game zone, Richards and Amber are captured by the resistance and taken to their hideout, where they learn of their “deaths” on the show. Using the access codes provided by Amber, the resistance takes over the ICS satellite. Richards leads the rebels to the ICS studios where they seize the control room, allowing the resistance broadcast. Richards then heads to the main studio floor, shocking the live and at-home audiences who had watched him supposedly die. Amber encounters Dynamo, but she kills him when an errant gunshot sets off the sprinkler system, electrocuting him when the water hits his electrically powered suit. Richards confronts Killian, now shamed and disgraced before those watching. He explains that he had created the show for huge ratings and to appease American viewers' love for television, action and violence. Ignoring the excuse, Richards sends Killian into the game zone aboard a rocket sled, which flies into a billboard, that features Killian himself, and explodes, killing him instantly, much to the delight of the live television audience. The film ends as Ben and Amber share a kiss as they walk off the studio.

The review aggregation website Rotten Tomatoes
Rotten Tomatoes
Rotten Tomatoes is a website devoted to reviews, information, and news of films—widely known as a film review aggregator. Its name derives from the cliché of audiences throwing tomatoes and other vegetables at a poor stage performance...
reported that 63% of critics gave the film a positive review based on a sample of 32 reviews, with an average score of 5.5/10. In The Running Mans opening weekend, it was released in 1,692 theaters and grossed $8,117,465. The film's total domestic gross was $38,122,105.

A video game based on the film was released for the ZX Spectrum
ZX Spectrum
The ZX Spectrum is an 8-bit personal home computer released in the United Kingdom in 1982 by Sinclair Research Ltd...
, Commodore 64
Commodore 64
The Commodore 64 is an 8-bit home computer introduced by Commodore International in January 1982.Volume production started in the spring of 1982, with machines being released on to the market in August at a price of US$595...
, Amstrad CPC
Amstrad CPC
The Amstrad CPC is a series of 8-bit home computers produced by Amstrad between 1984 and 1990. It was designed to compete in the mid-1980s home computer market dominated by the Commodore 64 and the Sinclair ZX Spectrum, where it successfully established itself primarily in the United Kingdom,...
, Amiga
Amiga
The Amiga is a family of personal computers that was sold by Commodore in the 1980s and 1990s. The first model was launched in 1985 as a high-end home computer and became popular for its graphical, audio and multi-tasking abilities...
, and Atari ST
Atari ST
The Atari ST is a home/personal computer that was released by Atari Corporation in 1985 and commercially available from that summer into the early 1990s. The "ST" officially stands for "Sixteen/Thirty-two", which referred to the Motorola 68000's 16-bit external bus and 32-bit internals...
. The game was developed by Emerald Software Ltd
Emerald Software Ltd
Emerald Software was a video game publisher founded in 1988 by two UK entertainment executives - David Martin of Martech, and Mike Dixon who previously worked with EMI and worked as the company CEO....
and published by Grandslam Entertainment
Grandslam Entertainment
Grandslam Entertainment was a computer and video games software house based in Britain. It was formed in late 1987 from the ashes of Argus Press Software by former Argus Managing Director, Stephen Hall. Grandslam developed and published many games for home computers during the 1980s and 1990s...
. A 1990 video game called Smash TV
Smash TV
Smash TV is a 1990 arcade game created by Eugene Jarvis and Mark Turmell for Williams. Home versions were developed for various platforms and most were published by Acclaim Entertainment.-Description:...
was inspired by The Running Man.