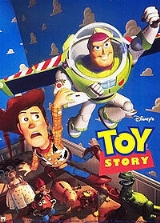 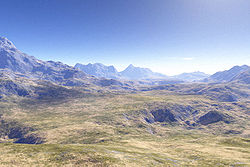 Computer-generated imagery (CGI) is the application of the field of computer graphics
Computer graphics
Computer graphics are graphics created using computers and, more generally, the representation and manipulation of image data by a computer with help from specialized software and hardware....
or, more specifically, 3D computer graphics
3D computer graphics
3D computer graphics are graphics that use a three-dimensional representation of geometric data that is stored in the computer for the purposes of performing calculations and rendering 2D images...
to special effects in art
Art
Art is the product or process of deliberately arranging items in a way that influences and affects one or more of the senses, emotions, and intellect....
, video games, film
Film
A film, also called a movie or motion picture, is a series of still or moving images. It is produced by recording photographic images with cameras, or by creating images using animation techniques or visual effects...
s, television program
Television program
A television program , also called television show, is a segment of content which is intended to be broadcast on television. It may be a one-time production or part of a periodically recurring series...
s, commercials, simulators and simulation generally, and printed media. The visual scenes may be either dynamic or static.


Not only do animated images form part of computer-generated imagery, natural looking landscapes, such as fractal landscapes are also generated via computer algorithms. A simple way to generate fractal surfaces is to use an extension of the triangular mesh
Polygon mesh
A polygon mesh or unstructured grid is a collection of vertices, edges and faces that defines the shape of a polyhedral object in 3D computer graphics and solid modeling...
method, relying on the construction of some special case of a de Rham curve
De Rham curve
In mathematics, a de Rham curve is a certain type of fractal curve named in honor of Georges de Rham.The Cantor function, Césaro curve, Minkowski's question mark function, the Lévy C curve, the blancmange curve and the Koch curve are all special cases of the general de Rham...
, e.g. midpoint displacement. For instance, the algorithm may start with a large triangle, then recursively zoom in by dividing it into 4 smaller Sierpinski triangle
Sierpinski triangle
The Sierpinski triangle , also called the Sierpinski gasket or the Sierpinski Sieve, is a fractal and attractive fixed set named after the Polish mathematician Wacław Sierpiński who described it in 1915. However, similar patterns appear already in the 13th-century Cosmati mosaics in the cathedral...
s, then interpolate the height of each point from its nearest neighbors. The creation of a Brownian surface
Brownian surface
A Brownian surface is a fractal surface generated via a fractal elevation function.For instance, in the three-dimensional case, where two variables X and Y are given as coordinates, the elevation function between any two points and can be set to have a mean or expected value that increases as the...
may be achieved not only by adding noise as new nodes are created, but by adding additional noise at multiple levels of the mesh. Thus a topographical map with varying levels of height can be created using relatively straightforward fractal algorithms. Some typical, and easy to program fractals used in CGI are the plasma fractal and the more dramatic fault fractal.

A large number of specific techniques have been researched and developed to produce highly focused computer-generated effects, e.g. the use of specific models to represent the chemical weathering of stones to model erosion and produce an "aged appearance" for a given stone-based surface.

Architectural modeling tools allow an architect to visualize a space and perform "walk throughs" in an interactive manner, thus providing "interactive environments" both at the urban and building levels. Specific applications in architecture not only include the specification of building structures such as walls and windows, and walk-throughs, but the effects of light and how sunlight will affect a specific design at different times of the day.

In some applications, computer-generated images are used to "reverse engineer" historical buildings. For instance, a computer-generated reconstruction of the monastery at Georgenthal
Georgenthal
Georgenthal is a municipality in the district of Gotha, in Thuringia, Germany....
in Germany was derived from the ruins of the monastery, yet provides the viewer with a "look and feel" of what the building would have looked like in its day. 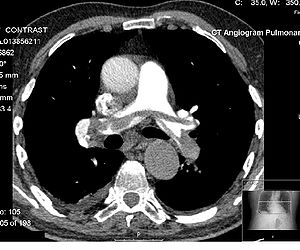 Computer generated models used in skeletal animation
Skeletal animation
Skeletal animation is a technique in computer animation in which a character is represented in two parts: a surface representation used to draw the character and a hierarchical set of interconnected bones used to animate the mesh...
are not always anatomically correct, however, organizations such as the Scientific Computing and Imaging Institute
Scientific Computing and Imaging Institute
The Scientific Computing and Imaging Institute is a permanent research institute at the University of Utah. It is a leader in engineering and research in the areas of scientific computing, visualization, and imaging...
have developed anatomically correct computer-based models. Computer generated anatomical models can be used both for instructional and operational purposes. To date, a large body of artist produced medical image
Medical imaging
Medical imaging is the technique and process used to create images of the human body for clinical purposes or medical science...
s continue to be used by medical students, such as images by Frank Netter, e.g. Cardiac images. However, a number of online anatomical models are becoming available.

In modern medical applications, patient specific models are constructed in "computer assisted surgery". For instance, in total knee replacement
Knee replacement
Knee replacement, or knee arthroplasty, is a surgical procedure to replace the weight-bearing surfaces of the knee joint to relieve the pain and disability of osteoarthritis. It may be performed for other knee diseases such as rheumatoid arthritis and psoriatic arthritis...
, the construction of a detailed patient specific model can be used to carefully plan the surgery. These three dimensional models are usually extracted from multiple CT scans of the appropriate parts of the patient's own anatomy. Such models can also be used for planning aortic valve
Aortic valve
The aortic valve is one of the valves of the heart. It is normally tricuspid , although in 1% of the population it is found to be congenitally bicuspid . It lies between the left ventricle and the aorta....
implantations, one of the common procedures for treating heart disease
Heart disease
Heart disease, cardiac disease or cardiopathy is an umbrella term for a variety of diseases affecting the heart. , it is the leading cause of death in the United States, England, Canada and Wales, accounting for 25.4% of the total deaths in the United States.-Types:-Coronary heart disease:Coronary...
. Given that the shape, diameter and position of the coronary openings can vary greatly from patient to patient, the extraction (from CT scans) of a model that closely resembles a patient's valve anatomy can be highly beneficial in planning the procedure.

Models of cloth generally fall into three groups: the geometric-mechanical structure at yarn
Yarn
Yarn is a long continuous length of interlocked fibres, suitable for use in the production of textiles, sewing, crocheting, knitting, weaving, embroidery and ropemaking. Thread is a type of yarn intended for sewing by hand or machine. Modern manufactured sewing threads may be finished with wax or...
crossings, secondly the mechanics of continuous elastic sheets and thirdly the geometric macroscopic features of cloth. To date, making the clothing of a digital character automatically fold in a natural way remains a challenge for many animators.

In addition to their use in film, advertising and other modes of public display, computer generated images of clothing are now routinely used by top fashion design firms.

Interactive visualization is a general term that applies to the rendering of data that may vary dynamically and allowing a user to view the data from multiple perspectives. The applications areas may vary significantly, ranging from the visualization of the flow patterns in fluid dynamics
Fluid dynamics
In physics, fluid dynamics is a sub-discipline of fluid mechanics that deals with fluid flow—the natural science of fluids in motion. It has several subdisciplines itself, including aerodynamics and hydrodynamics...
to specific computer aided design applications. The data rendered may correspond to specific visual scenes that change as the user interacts with the system, e.g. simulators such as flight simulator
Flight simulator
A flight simulator is a device that artificially re-creates aircraft flight and various aspects of the flight environment. This includes the equations that govern how aircraft fly, how they react to applications of their controls and other aircraft systems, and how they react to the external...
s make extensive use of CGI techniques for representing the world.

At the abstract level an interactive visualization process involves a data pipeline in which the raw data is managed and filtered to a form that makes it suitable for rendering. This is often called the "visualization data". The visualization data is then mapped to a "visualization representation" that can be fed to a rendering system. This is usually called a "renderable representation". This representation is then rendered as a displayable image. As the user interacts with the system, e.g. by using joystick controls to change their position within the virtual world, the raw data is fed through the pipeline to create a new rendered image, often making real-time computational efficiency a key consideration in such applications.

Computer animation is essentially a digital successor to the art of stop motion
Stop motion
Stop motion is an animation technique to make a physically manipulated object appear to move on its own. The object is moved in small increments between individually photographed frames, creating the illusion of movement when the series of frames is played as a continuous sequence...
animation of 3D models and frame-by-frame animation of 2D illustrations. Computer generated animations are more controllable than other more physically based processes, such as constructing miniatures
Miniature effect
A miniature effect is a special effect created for motion pictures and television programs using scale models. Scale models are often combined with high speed photography or matte shots to make gravitational and other effects appear convicing to the viewer...
for effects shots or hiring extras for crowd scenes, and because it allows the creation of images that would not be feasible using any other technology. It can also allow a single graphic artist to produce such content without the use of actors, expensive set pieces, or props.

To create the illusion of movement, an image is displayed on the computer screen
Computer display
A monitor or display is an electronic visual display for computers. The monitor comprises the display device, circuitry, and an enclosure...
and repeatedly replaced by a new image that is similar to the previous image, but advanced slightly in the time domain (usually at a rate of 24 or 30 frames/second). This technique is identical to how the illusion of movement is achieved with television
Television
Television is a telecommunication medium for transmitting and receiving moving images that can be monochrome or colored, with accompanying sound...
and motion pictures
Film
A film, also called a movie or motion picture, is a series of still or moving images. It is produced by recording photographic images with cameras, or by creating images using animation techniques or visual effects...
.