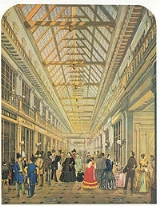 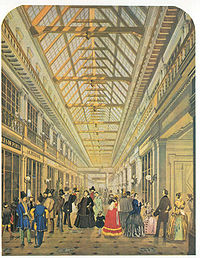 The Passage , from the French word Passage, is an elite department store
Department store
A department store is a retail establishment which satisfies a wide range of the consumer's personal and residential durable goods product needs; and at the same time offering the consumer a choice of multiple merchandise lines, at variable price points, in all product categories...
on Nevsky Avenue in Saint Petersburg
Saint Petersburg
Saint Petersburg is a city and a federal subject of Russia located on the Neva River at the head of the Gulf of Finland on the Baltic Sea...
, Russia
Russia
Russia or , officially known as both Russia and the Russian Federation , is a country in northern Eurasia. It is a federal semi-presidential republic, comprising 83 federal subjects...
, which celebrated its 150th anniversary in 1998. Parenthetically, the Passage premises have long been associated with the entertainment industry and still remains home to the Komissarzhevskaya Theatre.

The site where the Passage sprawls had been devoted to trade since the city's foundation in the early 18th century. It had been occupied by various shops and warehouses (Little Gostiny Dvor
Gostiny Dvor
Great Gostiny Dvor is a vast department store on Nevsky Avenue in St Petersburg.This Gostiny Dvor is not only the city's oldest shopping centre, but also one of the first shopping arcades in the world...
, Schukin Dvor, Apraksin Dvor
Apraksin Dvor
Apraksin Yard is a department store in Saint Petersburg, Russia. The buildings of Apraksin Dvor nestle between Sadovaya Street and the Fontanka River....
) until 1846, when Count Essen-Stenbock-Fermor acquired the grounds to build an elite shopping mall
Shopping mall
A shopping mall, shopping centre, shopping arcade, shopping precinct or simply mall is one or more buildings forming a complex of shops representing merchandisers, with interconnecting walkways enabling visitors to easily walk from unit to unit, along with a parking area — a modern, indoor version...
for the highest echelons of the Russian nobility and bourgeoisie
Bourgeoisie
In sociology and political science, bourgeoisie describes a range of groups across history. In the Western world, between the late 18th century and the present day, the bourgeoisie is a social class "characterized by their ownership of capital and their related culture." A member of the...
.

The name came from a vast gallery between Nevsky Avenue and Italianskaya Street which provided the main passage
Passage
-Other meanings:* Passage , a long room or hall leading to other rooms* Passage , a form of trained slow, animated trot performed by a horse* Passage , the process of approving a proposed law...
through the mall. The gallery was covered over by an arching glass and steel roof, thus giving it a claim to being one of the world's first shopping malls, along with Passage du Caire in Paris
Paris
Paris is the capital and largest city in France, situated on the river Seine, in northern France, at the heart of the Île-de-France region...
(1798) Burlington Arcade
Burlington Arcade
The Burlington Arcade is a covered shopping arcade in London that runs behind Bond Street from Piccadilly through to Burlington Gardens. It is one of the precursors of the mid-19th century European shopping gallery and the modern shopping centre...
in London
London
London is the capital city of :England and the :United Kingdom, the largest metropolitan area in the United Kingdom, and the largest urban zone in the European Union by most measures. Located on the River Thames, London has been a major settlement for two millennia, its history going back to its...
, Galerie Vivienne in Paris (1823) and Galeries Royales Saint-Hubert
Galeries Royales Saint-Hubert
The Galeries Royales Saint-Hubert or Koninklijke Sint-Hubertusgalerijen is a glazed shopping arcade in Brussels that preceded other famous 19th-century shopping arcades such as the Galleria Vittorio Emanuele II in Milan and The Passage in St Petersburg...
in Brussels
Brussels
Brussels , officially the Brussels Region or Brussels-Capital Region , is the capital of Belgium and the de facto capital of the European Union...
.

The three-storey building of the Passage opened its doors to consumers on May 9, 1848. It was one of the first structures in Russia to employ gas
Gas
Gas is one of the three classical states of matter . Near absolute zero, a substance exists as a solid. As heat is added to this substance it melts into a liquid at its melting point , boils into a gas at its boiling point, and if heated high enough would enter a plasma state in which the electrons...
for lighting. Another innovation was an underground floor, where an electric station would be installed in 1900. Although the store specialized in jewellery
Jewellery
Jewellery or jewelry is a form of personal adornment, such as brooches, rings, necklaces, earrings, and bracelets.With some exceptions, such as medical alert bracelets or military dog tags, jewellery normally differs from other items of personal adornment in that it has no other purpose than to...
, expensive clothes and other luxury goods, crowds of common people flocked to see the most fashionable shop of the Russian Empire
Russian Empire
The Russian Empire was a state that existed from 1721 until the Russian Revolution of 1917. It was the successor to the Tsardom of Russia and the predecessor of the Soviet Union...
. A fee of 50 kopeck
Russian ruble
The ruble or rouble is the currency of the Russian Federation and the two partially recognized republics of Abkhazia and South Ossetia. Formerly, the ruble was also the currency of the Russian Empire and the Soviet Union prior to their breakups. Belarus and Transnistria also use currencies with...
s had to be introduced in order to limit admissions.

Stenbock-Fermor conceived of the Passage as more than a mere shopping mall, but also as a cultural and social centre for the people of St Petersburg. The edifice contained coffee-houses, confectioneries, panorama
Panorama
A panorama is any wide-angle view or representation of a physical space, whether in painting, drawing, photography, film/video, or a three-dimensional model....
installations, an anatomical museum, a wax museum
Wax museum
A wax museum or waxworks consists of a collection of wax sculptures representing famous people from history and contemporary personalities exhibited in lifelike poses....
, and even a small zoo
Zoo
A zoological garden, zoological park, menagerie, or zoo is a facility in which animals are confined within enclosures, displayed to the public, and in which they may also be bred....
, described by Dostoyevsky in his extravaganza "Crocodile, or Passage through the Passage". The concert hall became renowned as a setting for literary readings attended by the likes of Dostoevsky, Turgenev, and Taras Shevchenko
Taras Shevchenko
Taras Hryhorovych Shevchenko -Life:Born into a serf family of Hryhoriy Ivanovych Shevchenko and Kateryna Yakymivna Shevchenko in the village of Moryntsi, of Kiev Governorate of the Russian Empire Shevchenko was orphaned at the age of eleven...
. 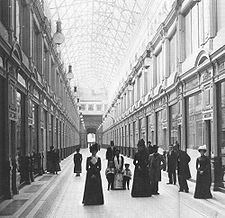 In 1897 the ownership of the Passage passed from Stenbock-Fermor's heirs to Princess Nadezhda Boryatinsky. A great fire in 1898 necessitated a major renovation, funded by the Crédit Lyonnais
Crédit Lyonnais
Crédit Lyonnais is a historic French bank. In the early 1990s it was the largest French bank, majority state-owned at that point. Crédit Lyonnais was the subject of poor management during that period which almost led to its bankruptcy in 1993...
, a bank
Bank
A bank is a financial institution that serves as a financial intermediary. The term "bank" may refer to one of several related types of entities:...
which leased a large portion of the store as its offices. In 1900, the building was revamped, with the addition of a further storey, and refaced in Radom sandstone
Sandstone
Sandstone is a sedimentary rock composed mainly of sand-sized minerals or rock grains.Most sandstone is composed of quartz and/or feldspar because these are the most common minerals in the Earth's crust. Like sand, sandstone may be any colour, but the most common colours are tan, brown, yellow,...
. The new owner transformed the former concert hall into a theatre
Theatre
Theatre is a collaborative form of fine art that uses live performers to present the experience of a real or imagined event before a live audience in a specific place. The performers may communicate this experience to the audience through combinations of gesture, speech, song, music or dance...
employing Vera Komissarzhevskaya
Vera Komissarzhevskaya
Vera Fyodorovna Komissarzhevskaya was the most celebrated Russian actress at the turn of the twentieth century.Vera Komissarzhevskaya was the daughter of Fyodor Komissarzhevsky, a leading tenor of the Mariinsky Theatre, and sister of Theodore Komisarjevsky, a famous theatrical director...
as its artistic director. To draw even more consumers to the store, the Soleille, one of the largest cinema
Movie theater
A movie theater, cinema, movie house, picture theater, film theater is a venue, usually a building, for viewing motion pictures ....
s in the Russian capital, was opened in the complex in 1908.

After the Russian Revolution of 1917
Russian Revolution of 1917
The Russian Revolution is the collective term for a series of revolutions in Russia in 1917, which destroyed the Tsarist autocracy and led to the creation of the Soviet Union. The Tsar was deposed and replaced by a provisional government in the first revolution of February 1917...
and the following several years of disorder, the store was reopened as the Passage Supermarket in 1922. It continued in this capacity until 1933, when the municipal authorities declared the Passage a "model department store", the only one in Leningrad (as the former St Petersburg was then known) and one of only three such stores in the Soviet Union
Soviet Union
The Soviet Union , officially the Union of Soviet Socialist Republics , was a constitutionally socialist state that existed in Eurasia between 1922 and 1991....
. The renovated "palace of Soviet trade" (as the media touted it) opened in 1934 and offered about 30,000 types of goods, all manufactured in the USSR. The Children's World section became especially popular with the inhabitants of Leningrad.

The Passage remained a showcase of the Soviet industry until the onset of World War II. During the Siege of Leningrad
Siege of Leningrad
The Siege of Leningrad, also known as the Leningrad Blockade was a prolonged military operation resulting from the failure of the German Army Group North to capture Leningrad, now known as Saint Petersburg, in the Eastern Front theatre of World War II. It started on 8 September 1941, when the last...
, the shop was closed but the majority of employees chose to remain day and night. The building's glass roof was subjected to intensive bombing, but amazingly the interior sustained little damage. The Passage was restored and reopened for business in 1947. Since 1961, this historic department store has been specializing in goods for women.

The Passage is now privately owned by employees and shareholders. Updates and renovations throughout the entire building were done to meet modern international standards. Expanded showrooms welcomed more customers. Passage established relations with new trade and business partners, such as Escada, and other international department stores. One of the first upscale food markets in Russia, with a wide variety of international produce, opened in the basement. New restaurant opened on the upper level with the panoramic view of the Nevsky Prospect.