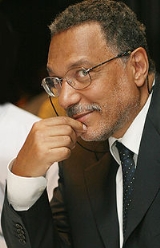 Pauly was born in Paris
Paris
Paris is the capital and largest city in France, situated on the river Seine, in northern France, at the heart of the Île-de-France region...
, France
France
The French Republic , The French Republic , The French Republic , (commonly known as France , is a unitary semi-presidential republic in Western Europe with several overseas territories and islands located on other continents and in the Indian, Pacific, and Atlantic oceans. Metropolitan France...
. He grew up, however, in Switzerland
Switzerland
Switzerland name of one of the Swiss cantons. ; ; ; or ), in its full name the Swiss Confederation , is a federal republic consisting of 26 cantons, with Bern as the seat of the federal authorities. The country is situated in Western Europe,Or Central Europe depending on the definition....
in what was called a strange "Dickensian" childhood where he was forced to stay as a live-in servant to a new family. For the first 16 years of his life, Pauly lived an inward life as he was mixed race in an all white town, finding solace in books/reading and model construction. At 16 he ran away and put himself through high school in Wuppertal, Germany after one year working with disabled people for a local church-run institution. His work led to a scholarship to the University of Kiel
University of Kiel
The University of Kiel is a university in the city of Kiel, Germany. It was founded in 1665 as the Academia Holsatorum Chiloniensis by Christian Albert, Duke of Holstein-Gottorp and has approximately 23,000 students today...
.

It was at the University of Kiel where Pauly decided on fisheries biology. He said he wanted to work in the tropics because he felt that he would "fit in" better there. He also wanted to devote his life to an applied job where he could help people.

He did a master's degree at Kiel University under Gotthilf Hempel
Gotthilf Hempel
Gotthilf Hempel is a retired German marine biologist and oceanographer.Hempel studied biology and geology at the universities of Mainz and Heidelberg. In 1952 he gained his Ph.D. with a study on the energetics of grasshopper jumps from Heidelberg University...
on "The ecology and fishery of a small West African lagoon". Pauly then spent two years conducting trawling surveys as a member of a German-Indonesian project aiming at introducing this relatively new gear. He began to write on tropical fisheries management; later his emphasis switched to global fisheries trends and conservation.

Some of Pauly's best work arguably appeared in his Ph.D. dissertation at Kiel University in Germany, again under Hempel, in which he established strong relationships between the surface area of gills and the growth of fishes and aquatic (gill-breathing) invertebrates.

After his Ph.D., Pauly worked for 15 years at the International Center for Living and Aquatic Resources Management (ICLARM), in Manila
Manila
Manila is the capital of the Philippines. It is one of the sixteen cities forming Metro Manila.Manila is located on the eastern shores of Manila Bay and is bordered by Navotas and Caloocan to the north, Quezon City to the northeast, San Juan and Mandaluyong to the east, Makati on the southeast,...
, Philippines
Philippines
The Philippines , officially known as the Republic of the Philippines , is a country in Southeast Asia in the western Pacific Ocean. To its north across the Luzon Strait lies Taiwan. West across the South China Sea sits Vietnam...
. Early in his career at ICLARM, Pauly worked in the tropics and developed new methods for estimating fish populations
Population dynamics of fisheries
A fishery is an area with an associated fish or aquatic population which is harvested for its commercial or recreational value. Fisheries can be wild or farmed. Population dynamics describes the ways in which a given population grows and shrinks over time, as controlled by birth, death, and...
. Pauly helped to design, implement, and perfect methods using length-frequency data instead of the age of fish to estimate parameters of fisheries statistics such as growth and mortality.

Through the 1990s, Pauly’s work centered on the effects of overfishing
Overfishing
Overfishing occurs when fishing activities reduce fish stocks below an acceptable level. This can occur in any body of water from a pond to the oceans....
. The author of several books and more than 500 scientific papers, Pauly is a prolific writer and communicator. He developed the concept of shifting baselines
Shifting baselines
Shifting baseline is a term used to describe the way significant changes to a system are measured against previous reference points , which themselves may represent significant changes from the original state of the system.The term was first used by the fisheries scientist Daniel Pauly in his...
in 1995 and authored the seminal paper, Fishing down marine food webs, in 1998. For working to protect the environment, he earned a place in the "Scientific American
Scientific American
Scientific American is a popular science magazine. It is notable for its long history of presenting science monthly to an educated but not necessarily scientific public, through its careful attention to the clarity of its text as well as the quality of its specially commissioned color graphics...
50" in 2003, the same year the New York Times labeled him an “iconoclast”. Pauly won the International Cosmos Prize
International Cosmos Prize
The International Cosmos Prize was established in 1993, commemorating Expo 90 in Osaka, Japan.The objective of the prize is to develop the basic concept of Expo 90, "The Harmonious Coexistence between Nature and Mankind."...
in 2005, the Volvo Environment Prize
Volvo Environment Prize
Volvo Environment Prize is an annual international award originating in Sweden. The prize is awarded to individuals who explore the way to a sustainable world...
in 2006, the Excellence in Ecology Prize and Ted Danson
Ted Danson
Edward Bridge “Ted” Danson III is an American actor best known for his role as central character Sam Malone in the sitcom Cheers, and his role as Dr. John Becker on the series Becker. He also plays a recurring role on Larry David's HBO sitcom Curb Your Enthusiasm and starred alongside Glenn Close...
Ocean Hero Award in 2007, and the Ramon Margalef Prize in Ecology and Environmental Sciences
Ramon Margalef Prize in Ecology and Environmental Sciences
The Ramon Margalef Prize in Ecology is a prize awarded annually to recognize an exceptional scientific career or discovery in the field of ecology or other environmental science. The award was created to honor the life and work of Dr. Ramon Margalef , one of the founding fathers of modern ecology...
in 2008.

To date, he frequently expresses opinions about public policy. Specifically, he argues that governments should abolish subsidies to fishing fleets and establish marine reserves
Marine Protected Area
Marine Protected Areas, like any protected area, are regions in which human activity has been placed under some restrictions in the interest of conserving the natural environment, it's surrounding waters and the occupant ecosystems, and any cultural or historical resources that may require...
. He is a member of the Board of Oceana
Oceana (non-profit group)
Oceana is the largest international ocean conservation and advocacy organization. Oceana works to protect and restore the world’s oceans through targeted policy campaigns....
. In a 2009 article written for The New Republic, Pauly compares today's fisheries to a global Ponzi scheme
Ponzi scheme
A Ponzi scheme is a fraudulent investment operation that pays returns to its investors from their own money or the money paid by subsequent investors, rather than from any actual profit earned by the individual or organization running the operation...
.