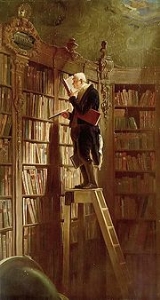 Encyclopedia
The Bookworm is an 1850 oil-on-canvas painting
Oil painting
Oil painting is the process of painting with pigments that are bound with a medium of drying oil—especially in early modern Europe, linseed oil. Often an oil such as linseed was boiled with a resin such as pine resin or even frankincense; these were called 'varnishes' and were prized for their body...
by the German painter and poet Carl Spitzweg
Carl Spitzweg
Carl Spitzweg was a German romanticist painter and poet. He is considered to be one of the most important artists of the Biedermeier era....
. The picture is typical of Biedermeier
Biedermeier
In Central Europe, the Biedermeier era refers to the middle-class sensibilities of the historical period between 1815, the year of the Congress of Vienna at the end of the Napoleonic Wars, and 1848, the year of the European revolutions...
art, encapsulating the introspective and conservative mood in Europe during the period between the end of the Napoleonic Wars
Napoleonic Wars
The Napoleonic Wars were a series of wars declared against Napoleon's French Empire by opposing coalitions that ran from 1803 to 1815. As a continuation of the wars sparked by the French Revolution of 1789, they revolutionised European armies and played out on an unprecedented scale, mainly due to...
and the revolutions of 1848
Revolutions of 1848
The European Revolutions of 1848, known in some countries as the Spring of Nations, Springtime of the Peoples or the Year of Revolution, were a series of political upheavals throughout Europe in 1848. It was the first Europe-wide collapse of traditional authority, but within a year reactionary...
, but at the same time poking fun at those attitudes by embodying them in the fusty old scholar unconcerned with the affairs of the mundane world.

The picture shows an untidily dressed elderly bibliophile teetering on top of a library ladder with several large volumes jammed under his arms and between his legs as he peers short-sightedly
Myopia
Myopia , "shortsightedness" ) is a refractive defect of the eye in which collimated light produces image focus in front of the retina under conditions of accommodation. In simpler terms, myopia is a condition of the eye where the light that comes in does not directly focus on the retina but in...
at a book. Unaware of his apparently princely or abbatial Baroque
Baroque
The Baroque is a period and the style that used exaggerated motion and clear, easily interpreted detail to produce drama, tension, exuberance, and grandeur in sculpture, painting, literature, dance, and music...
surroundings, he is totally absorbed in his researches. A handkerchief, carelessly replaced, trails from his pocket. His black knee-breeches suggest a courtly status. The intensity with which he stares at his book in the dusty old once-glorious library with its frescoed ceiling mirrors the inward-looking attitudes and return to conservative values that affected Europe during the period; the painting was executed two years after the revolutions of 1848
Revolutions of 1848
The European Revolutions of 1848, known in some countries as the Spring of Nations, Springtime of the Peoples or the Year of Revolution, were a series of political upheavals throughout Europe in 1848. It was the first Europe-wide collapse of traditional authority, but within a year reactionary...
provided a shock to the stable world embodied in the dusty solitude of the library. In the lower left corner of the painting an old faded globe can be seen; the bookworm is not interested in the outside world, but in the knowledge of the past. He is illuminated with the soft golden light that is a hallmark of Spitzweg's work, but the scholar's interest in the light streaming from the unseen window extends only so far as it allows him to see the words on the pages of his old books. The height of the library ladder can only be estimated: the globe suggests a possible floor height, but none of the floor is visible, heightening the sense of precariousness of the oblivious scholar's position. Equally the size of the library is unknown; the old man is consulting books from the section of "Metaphysics
Metaphysics
Metaphysics is a branch of philosophy concerned with explaining the fundamental nature of being and the world, although the term is not easily defined. Traditionally, metaphysics attempts to answer two basic questions in the broadest possible terms:...
" (Metaphysik) — indicated by the plaque on the highly ornamented bookcase — which both suggests a vast library and underlines the otherworldliness of the book lover.

While obviously political or polemical art was discouraged by the conservative attitudes that pervaded Central Europe, and more parochial themes were chosen by the artists of the Biedermeier period than had been the vogue in the Romantic
Romanticism
Romanticism was an artistic, literary and intellectual movement that originated in the second half of the 18th century in Europe, and gained strength in reaction to the Industrial Revolution...
period that preceded it, there was still room for subtle allusions and light satire. Spitzweg's paintings poke gentle fun at the figures he saw around him. He was almost entirely self-taught and although his techniques were developed by copying the Dutch Masters, his portrayal of his subjects is believed to have been influenced by the works of William Hogarth
William Hogarth
William Hogarth was an English painter, printmaker, pictorial satirist, social critic and editorial cartoonist who has been credited with pioneering western sequential art. His work ranged from realistic portraiture to comic strip-like series of pictures called "modern moral subjects"...
and Honoré Daumier
Honoré Daumier
Honoré Daumier was a French printmaker, caricaturist, painter, and sculptor, whose many works offer commentary on social and political life in France in the 19th century....
. Although The Bookworm is among the most obviously satirical of his works and though none of his paintings show the cruel wit of Hogarth, there are parallels between the characters of Hogarth and those depicted by Spitzweg; the bookworm — carefully observed and knowingly detailed — would not look out of place in a scene from Marriage à-la-mode; indeed, Spitzweg is sometimes referred to as a "German Hogarth".