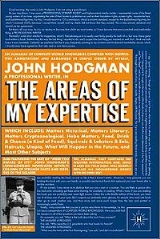 The Areas of My Expertise
Topic Home
Discussion
0

Encyclopedia
The Areas of My Expertise (ISBN 0-525-94908-9, first published in 2005) is a satirical
Satire
Satire is primarily a literary genre or form, although in practice it can also be found in the graphic and performing arts. In satire, vices, follies, abuses, and shortcomings are held up to ridicule, ideally with the intent of shaming individuals, and society itself, into improvement...
almanac
Almanac
An almanac is an annual publication that includes information such as weather forecasts, farmers' planting dates, and tide tables, containing tabular information in a particular field or fields often arranged according to the calendar etc...
by John Hodgman
John Hodgman
John Kellogg Hodgman is an American author, actor, and humorist. In addition to his published written works, such as The Areas of My Expertise, More Information Than You Require, and That Is All, he is known for his personification of a PC in contrast to Justin Long's personification of a Mac in...
. It is written in the form of absurd historical stories, complex charts and graphs, and fake newspaper columns. Among its sections are a list of 700 different hobo
Hobo
A hobo is a term which is often applied to a migratory worker or homeless vagabond, often penniless. The term originated in the Western—probably Northwestern—United States during the last decade of the 19th century. Unlike 'tramps', who work only when they are forced to, and 'bums', who do not...
names and complete descriptions of "all 51" US states. The full title of the book is:

An Almanac of Complete World Knowledge Compiled with Instructive Annotation and Arranged in Useful Order by myself, John Hodgman, a Professional Writer, in The Areas of My Expertise, which Include: Matters Historical, Matters Literary, Matters Cryptozoological
Cryptozoology
Cryptozoology refers to the search for animals whose existence has not been proven...
, Hobo Matters, Food, Drink & Cheese (a Kind of Food), Squirrels & Lobsters & Eels, Haircuts, Utopia, What Will Happen in the Future, and Most Other Subjects

The book was later released in audiobook form, narrated by John Hodgman himself with some musical accompaniment by frequent collaborator Jonathan Coulton
Jonathan Coulton
Jonathan Coulton is an American singer-songwriter, known for his songs about geek culture and his use of the Internet to draw fans...
and a guest appearance by Paul Rudd
Paul Rudd
Paul Stephen Rudd is an American actor and screenwriter. He has primarily appeared in comedies, and is known for his roles in the films Clueless, Wet Hot American Summer, Anchorman, Halloween: The Curse of Michael Myers, The 40-Year-Old Virgin, Knocked Up, Dinner for Schmucks, The Object of My...
.


The 700 Hoboes Project and e-Hobo.com

The 700 Hoboes Project refers to an internet meme
Internet meme
The term Internet meme is used to describe a concept that spreads via the Internet. The term is a reference to the concept of memes, although the latter concept refers to a much broader category of cultural information.-Description:...
that originated with a recording of Hodgman's recitation of the 700 hobo names from The Areas of My Expertise. An audio file of the reading, accompanied by frequent collaborator Jonathan Coulton
Jonathan Coulton
Jonathan Coulton is an American singer-songwriter, known for his songs about geek culture and his use of the Internet to draw fans...
playing "Big Rock Candy Mountain
Big Rock Candy Mountain
Big Rock Candy Mountain, first recorded by Harry McClintock in 1928, is a song about a hobo's idea of paradise, a modern version of the medieval concept of Cockaigne...
" "live for an hour, one take", was posted to a page on the promotional website for the book.

In October 2005, on hearing the audio file, Mark Frauenfelder proposed on the BoingBoing website to have "700 cartoonists volunteer to draw one of the 700 hoboes" that Hodgman listed in the book.

A few days later, the first of the 700 hoboes ("Stewbuilder Dennis") was posted to Flickr
Flickr
Flickr is an image hosting and video hosting website, web services suite, and online community that was created by Ludicorp in 2004 and acquired by Yahoo! in 2005. In addition to being a popular website for users to share and embed personal photographs, the service is widely used by bloggers to...
by Daniel Cardenas and a Flickr group (700 Hoboes) was subsequently formed.

In March 2006, several contributors to the 700 Hoboes Project decided to build a portal to house the drawings posted to the Flickr group. Len Peralta
Len Peralta
Len Peralta is a Cleveland-area graphic artist, illustrator, cartoonist, and podcaster who is known for zombie-themed caricatures and collaborations with nerd celebrities....
of Jawbone Radio came up with a design for the site and passed it on to Dan Coulter, who built a back end system using phpFlickr, his open source wrapper for Flickr's API. Hobo illustrators Adam Koford, Mike Peterson, Ben Rollman and Eric Vespoor contributed to the creation of the website, www.e-hobo.com. The URL refers to hobo #450 in the list, "my-e-hobo.com".

The 700 names were completed on September 5, 2006, coinciding with the release date of Areas of My Expertise to paperback, which contains an additional 100 hobo names. As of September 2006, there have been over 200 contributors to the project, spanning the globe. In March 2007, Adam Koford completed illustrating each of the 800 hoboes.

In one section of The Areas of My Expertise, "A Brief Time Line of the Lobster in America," Hodgman explains that lobsters
American lobster
The American lobster, Homarus americanus, is a species of lobster found on the Atlantic coast of North America, chiefly from Labrador to New Jersey. Within North America, it is also known as the northern lobster or Maine lobster. It can reach a body length of , and a mass of over , making it the...
as we know them today were not introduced to Maine until the turn of the century, after Theodore Roosevelt
Theodore Roosevelt
Theodore "Teddy" Roosevelt was the 26th President of the United States . He is noted for his exuberant personality, range of interests and achievements, and his leadership of the Progressive Movement, as well as his "cowboy" persona and robust masculinity...
built a secret canal from lobster-ridden New York City to the coast of Maine. Before that time, writes Hodgman, an entirely different animal - particularly "a kind of sea otter" - was known in Maine as the "lobster" (the photo of a European otter
European Otter
The European Otter , also known as the Eurasian otter, Eurasian river otter, common otter and Old World otter, is a European and Asian member of the Lutrinae or otter subfamily, and is typical of freshwater otters....
at right is included with the caption "Figure 11: The Lobster"). The new lobster threatened the existence of the "Old Lobster," the last of which died in 1980, in the kitchen of a Furry Old Lobster restaurant (which itself is part of a conglomeration owned by [new] lobsters).

While Hodgman's story is, of course, entirely fictional, an actual furry lobster, Kiwa hirsuta
Kiwa hirsuta
Kiwa hirsuta is a crustacean discovered in 2005 in the South Pacific Ocean. This decapod, which is approximately long, is notable for the quantity of silky blond setae covering its pereiopods . Its discoverers dubbed it the "yeti lobster" or "yeti crab."-Identification:K...
, was discovered in March 2005 in the South Pacific. Hodgman includes a photo of the newly discovered crustacean in the rear cover of the paperback edition of The Areas of My Expertise, along with the words, "Some readers have taken this as a worrisome portent that certain items in my book of lies may be coming true. BUT BE CALM. If you observe the 'FURRY OLD LOBSTER' described in my book, you will see that [that creature and the newly discovered species] are not the same creature at all, though both are DISGUSTINGLY FURRY." Since then, the book's official website has a page dedicated to the matter, including a photo of the otter-like "lobster" with the caption "Old furry old lobster."

Musician/Hodgman collaborator Jonathan Coulton
Jonathan Coulton
Jonathan Coulton is an American singer-songwriter, known for his songs about geek culture and his use of the Internet to draw fans...
has written a song called "Furry Old Lobster", telling the tale of the lost species. Coulton has performed the song on Attack of the Show, at many of Hodgman's book signings, and on the audiobook version of The Areas of My Expertise.

An additional section in Areas of My Expertise, Part Six, "Our 51 United States," contains Hodgman's own descriptions of the states of the United States of America, including nicknames and mottos. The 51st state, Hodgman says, is called "Hohoq (also known as Ar)" and "frequently moves across the continent by unknown means and seems to disappear altogether." He also says that Hohoq is home to the "Thunderbirds," giant eagles who shoot lightning from their eyes and transform into men. The state is described as having a complicated political history with the federal government, at one point being represented in the Senate
United States Senate
The United States Senate is the upper house of the bicameral legislature of the United States, and together with the United States House of Representatives comprises the United States Congress. The composition and powers of the Senate are established in Article One of the U.S. Constitution. Each...
by an enormous shape-shifting raven.

The internet
Internet
The Internet is a global system of interconnected computer networks that use the standard Internet protocol suite to serve billions of users worldwide...
browser game
Browser game
A browser game is a computer game that is played over the Internet using a web browser. Browser games can be created and run using standard web technologies or browser plug-ins. Browser games include all video game genres and can be single-player or multiplayer...
The Kingdom of Loathing features a playable game area named Hobopolis, which was directly inspired by Hodgman's work. The hobos that appear in Hobopolis (with the exception of the six bosses) are randomly named, although the possibilities borrow heavily from Hodgman's list of hobo names. The final boss, Hodgman the Hoboverlord, is named for John Hodgman himself. The developers of The Kingdom of Loathing were granted personal permission by John Hodgman to use his material, as well as his name, for the game. He was reportedly "flattered". Furthermore, a tattoo
Tattoo
A tattoo is made by inserting indelible ink into the dermis layer of the skin to change the pigment. Tattoos on humans are a type of body modification, and tattoos on other animals are most commonly used for identification purposes...
that can be obtained in-game from Hobopolis is the same as the hobo marking that means "It is time for hoboes to take over the United States government" in Hodgman's book.


More Information Than You Require