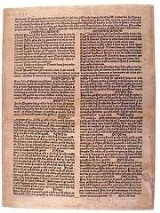 Overview
An almanac is an annual publication
Annual publication
An annual publication, more often called simply an annual, is a book or a magazine, comic book or comic strip published yearly. For example, a weekly or monthly publication may produce an Annual featuring similar materials to the regular publication....
that includes information such as weather forecasts, farmers' planting dates, and tide tables, containing tabular information in a particular field or fields often arranged according to the calendar
Calendar
A calendar is a system of organizing days for social, religious, commercial, or administrative purposes. This is done by giving names to periods of time, typically days, weeks, months, and years. The name given to each day is known as a date. Periods in a calendar are usually, though not...
etc. Astronomical
Astronomy
Astronomy is a natural science that deals with the study of celestial objects and phenomena that originate outside the atmosphere of Earth...
data and various statistics are also found in almanacs, such as the times of the rising and setting of the sun
Sun
The Sun is the star at the center of the Solar System. It is almost perfectly spherical and consists of hot plasma interwoven with magnetic fields...
and moon
Moon
The Moon is Earth's only known natural satellite,There are a number of near-Earth asteroids including 3753 Cruithne that are co-orbital with Earth: their orbits bring them close to Earth for periods of time but then alter in the long term . These are quasi-satellites and not true moons. For more...
, eclipse
Eclipse
An eclipse is an astronomical event that occurs when an astronomical object is temporarily obscured, either by passing into the shadow of another body or by having another body pass between it and the viewer...
s, hours of full tide
Tide
Tides are the rise and fall of sea levels caused by the combined effects of the gravitational forces exerted by the moon and the sun and the rotation of the Earth....
, stated festivals of churches, terms of courts, lists of all types, timelines, and more.
The earliest document use of the word in any language is in Latin in 1267 by Roger Bacon
Roger Bacon
Roger Bacon, O.F.M. , also known as Doctor Mirabilis , was an English philosopher and Franciscan friar who placed considerable emphasis on the study of nature through empirical methods...
, where it meant a set of tables detailing movements of heavenly bodies including the moon.