Encyclopedia
Thanet is a local government district
Non-metropolitan district
Non-metropolitan districts, or colloquially shire districts, are a type of local government district in England. As created, they are sub-divisions of non-metropolitan counties in a so-called "two-tier" arrangement...
of Kent
Kent
Kent is a county in southeast England, and is one of the home counties. It borders East Sussex, Surrey and Greater London and has a defined boundary with Essex in the middle of the Thames Estuary. The ceremonial county boundaries of Kent include the shire county of Kent and the unitary borough of...
, England which was formed under the Local Government Act 1972
Local Government Act 1972
The Local Government Act 1972 is an Act of Parliament in the United Kingdom that reformed local government in England and Wales on 1 April 1974....
, and came into being on 1 April 1974. The Isle of Thanet
Isle of Thanet
The Isle of Thanet lies at the most easterly point of Kent, England. While in the past it was separated from the mainland by the nearly -wide River Wantsum, it is no longer an island ....
makes up the major part of the District.

The district, which is governed by Thanet District Council
Thanet District Council
Thanet District Council is the local government body for the Thanet district. Its administrative centre is Margate. It is one of the district councils in Kent...
, is located on the north eastern tip of Kent, and is predominantly coastal, with north, east and southeast facing coastlines. It is bordered by the City of Canterbury
City of Canterbury
The City of Canterbury is a local government district with city status in Kent, England. The main settlement in the district is Canterbury, the seat of the Archbishop of Canterbury.-History:...
district to the west, and the Dover
Dover (district)
Dover is a local government district in Kent, England. Dover is its administrative centre. It was formed on 1 April 1974 by the merger of the boroughs of Deal, Dover, and Sandwich along with Dover Rural District and most of Eastry Rural District...
district to the south. The main towns in the district are Margate
Margate
-Demography:As of the 2001 UK census, Margate had a population of 40,386.The ethnicity of the town was 97.1% white, 1.0% mixed race, 0.5% black, 0.8% Asian, 0.6% Chinese or other ethnicity....
, Ramsgate
Ramsgate
Ramsgate is a seaside town in the district of Thanet in east Kent, England. It was one of the great English seaside towns of the 19th century and is a member of the ancient confederation of Cinque Ports. It has a population of around 40,000. Ramsgate's main attraction is its coastline and its main...
and Broadstairs
Broadstairs
Broadstairs is a coastal town on the Isle of Thanet in the Thanet district of east Kent, England, about south-east of London. It is part of the civil parish of Broadstairs and St Peter's, which includes St. Peter's and had a population in 2001 of about 24,000. Situated between Margate and...
.

The current District is held by a Conservative
Conservative Party (UK)
The Conservative Party, formally the Conservative and Unionist Party, is a centre-right political party in the United Kingdom that adheres to the philosophies of conservatism and British unionism. It is the largest political party in the UK, and is currently the largest single party in the House...
majority, who hold 33 seats, compared to the 19 seats held by Labour
Labour Party (UK)
The Labour Party is a centre-left democratic socialist party in the United Kingdom. It surpassed the Liberal Party in general elections during the early 1920s, forming minority governments under Ramsay MacDonald in 1924 and 1929-1931. The party was in a wartime coalition from 1940 to 1945, after...
, who are the second party.

There are two MPs for Thanet:

The names of the civil parishes located in the district are:

The town of Margate is an unparished area
Unparished area
In England, an unparished area is an area that is not covered by a civil parish. Most urbanised districts of England are either entirely or partly unparished. Many towns and some cities in otherwise rural districts are also unparished areas and therefore no longer have a town council or city...
: it has a charter maintained by charter trustees
Charter Trustees
In England and Wales, charter trustees are set up to maintain the continuity of a town charter or city charter after a district with the status of a borough or city has been abolished, until such time as a parish council is established...
, having been a municipal borough
Municipal borough
Municipal boroughs were a type of local government district which existed in England and Wales between 1835 and 1974, in Northern Ireland from 1840 to 1973 and in the Republic of Ireland from 1840 to 2002...
before 1974.

The whole district suffers from seasonal unemployment, in spite of its proximity to London, because of various factors, among them being inward migration; high numbers of old people; and low numbers of affluent people. It is not helped by poor overall indicators for Health. In a study of resilience to economic downturns, Thanet was poorly rated at 295th out of 324 districts. Unemployment levels are nearly twice the South East of England as a whole, and as a result a great deal of planning is being done to encourage more businesses to relocate to the District. The Thanet & East Kent Chamber produces a weekly business digest, the Thanet & East Kent Insider, which reports on economic activity in the private and public sectors.

New Projects underway include: A new community centre for Broadstairs. Redevelopment and renovations are to be undertaken at Margate's Dreamland (a Heritage Amusement Park); Cliftonville (Lido site); and a Holiday Inn (hotel) now open .A large retail and residential development on Ramsgate seafront is due to start construction in 2011. Royal sands as well and a multi million pound art gallery The Turner Contemporary (opened by Tracey Emin in April 2011) in Margate and massive investment and building works taking place in schools across the island.

In addition, the District Council has introduced an empty property initiative and has compulsory purchased empty and derelict buildings with the objective of bringing them back into use.

The Thanet Offshore Wind Project
Thanet Offshore Wind Project
The Thanet Wind Farm is an offshore wind farm off the coast of Thanet district in Kent, England. As of September 2010, it is the world's biggest offshore windfarm. It has a nameplate capacity of 300 MW and it cost £780-900 million...
, near North Foreland, began operating in September 2010. The project is expected to have a total capacity of up to 300 MW which, on average, is sufficient to supply approximately 240,000 homes per year with green energy. The project will thus make a significant contribution to the Government’s national and regional renewable energy targets. Thanet Earth
Thanet Earth
Thanet Earth is a large industrial agriculture project consortium under construction in the United Kingdom. As of early March 2009, food has been harvested....
is the largest greenhouse development in the UK covering an area of 91 hectares with 7 greenhouses each the size of 10 football pitches producing cucumbers tomatoes and peppers all year.

Margate, Ramsgate and Broadstairs each have shopping centres with a mix of local and national retailers complemented by Northdown Road, Cliftonville, Westgate and Birchington. Westwood at the centre of Thanet has seen much major development in recent years with the building of Westwood Cross
Westwood Cross
Westwood Cross is a shopping centre in Westwood in Thanet, Kent. It is circled by Broadstairs, Margate and Ramsgate. It was built by Carillion and opened in June 2005...
shopping centre which is the home of national retailers and several restaurant chains including a Travelodge
Travelodge
Travelodge refers to several hotel chains around the world. Current operations include: the United States, Canada, the United Kingdom, Spain, the Republic of Ireland, New Zealand and Australia...
hotel. Associated development has taken place around the shopping centre spawning other retail parks. 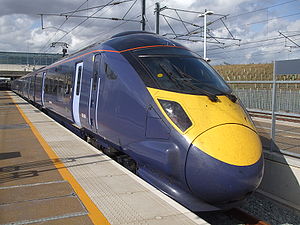 The rail connections are via the Chatham Main Line
Chatham Main Line
The Chatham Main Line is a British railway line that runs from either London Victoria to Dover Priory / Ramsgate or London St Pancras to Faversham, with both services travelling via Medway...
through Margate to Ramsgate, and the Ashford to Ramsgate (via Canterbury West) line
Ashford to Ramsgate (via Canterbury West) line
The Ashford to Ramsgate line is the railway that runs from Ashford to Ramsgate via Canterbury West. The same termini can be reached by the Kent Coast LineThe line is electrified .-Services:...
. New high speed rail links from London to Thanet began in December 2009,and it is now possible to travel from Margate to St Pancras at an average speed of 60 miles per hour (about 96 km/h). This will form part of the UK's first true high-speed commuter service, according to the South Eastern Railway Company. Main road links are the A28
A28 road
The A28 is a trunk road in southern England. It runs south-west from the seaside resort of Margate in Kent via Westgate and Birchington, reaching open countryside at Sarre. The road continues via Upstreet and Hersden to Sturry, and on to the cathedral city of Canterbury...
which brings traffic from Canterbury and Ashford; and the A299
A299 road
The A299, better known as the Thanet Way, is a major road in the county of Kent, England, and runs from Brenley Corner near Faversham to Ramsgate via Whitstable and Herne Bay. It is predominantly used for freight traffic to Ramsgate Harbour and local traffic to Thanet.Most of the A299 was...
, north coast route. The Saxon Shore Way
Saxon Shore Way
The Saxon Shore Way is a long-distance footpath in England, starting at Gravesend, Kent and traces the coast as it was in Roman times as far as Hastings, East Sussex, in total.-History:...
Long distance footpath skirts the coast.

Thanet has a large hospital: the Queen Elizabeth The Queen Mother, known as the QEQM. Extension work which started in 2007 is still ongoing, as of 2010.

As of July 2010, overall indicators of health are poor for Thanet:

Thanet also has a local online radio and podcasting service currently operating online only known as 'Thanet Community Radio' (TCR). The station works closely with Dover
Dover
Dover is a town and major ferry port in the home county of Kent, in South East England. It faces France across the narrowest part of the English Channel, and lies south-east of Canterbury; east of Kent's administrative capital Maidstone; and north-east along the coastline from Dungeness and Hastings...
based 'Dover Community Radio' (DCR) which operates in a similar way.

Thanet enjoys a Maritime climate being surrounded on 3 sides by sea, which generally results in mild winters and warm dry summers.